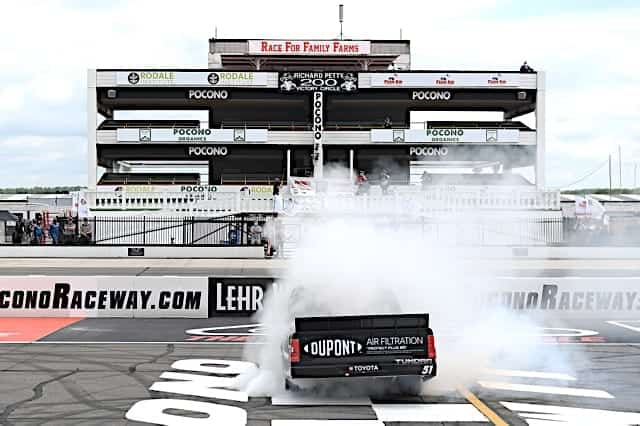 In the first race of a tripleheader at Pocono Raceway, Brandon Jones scored his first career NASCAR Gander RV & Outdoors Truck Series victory while driving for Kyle Busch Motorsports. The race, originally scheduled for Saturday but postponed due to rain, started just after 9:30 ET on Sunday morning and was an immediate demolition derby.

Johnny Sauter led the field to green from the pole, but a caution on lap 1 quickly froze the field. Matt Crafton and Codie Rohrbaugh crashed in the first turn; both trucks ended up backing into the wall and ending both drivers’ races.

The green flag had just flown again when another caution flew, after Raphaël Lessard caught the infield grass in the turn and lost his No. 4 Toyota Tundra, the truck sliding up hard into the outside wall. Austin Wayne Self was also caught up in the melee, his day done as well. The crash also resulted in the red flag being displayed for several minutes while crews cleaned up the mess.

Once back underway, the field got one green-flag lap completed before another caution flew, this time for Ty Majeski. Majeski had rocketed through the field to start the race, but made a late block on Grant Enfinger that resulted in contact and Majeski’s No. 45 truck spinning around. He made hard contact with the inside wall, sliding back up to the outside barrier and spilling oil across the track. That spill ended up causing yet another red flag, marking the third caution and second stoppage in the first 13 laps – something that had never happened before.

Sheldon Creed took advantage of the one-lap shootout, winning the first stage of the day. An early crash in Stage 2 – Brennan Poole the victim this time – brought out another yellow, and pit strategy then divided the field once back under green – but not for long, as Jordan Anderson suffered a flat tire and spun. Creed won Stage 2 under caution, sweeping the two segments.

Tate Fogleman joined those in the garage when he wrecked early on in the third stage. On the ensuing restart, Christian Eckes got the lead with KBM teammate Jones in second.

The lead didn’t last long, though, as Eckes crashed from the top spot. A blown rear tire was the culprit, teammate Jones barely avoiding Eckes’ sliding No. 18. Eckes also suffered a blown eardrum, likely a combination of the crash and a sinus infection he had.

Austin Hill briefly saw the lead on the restart before Jones took it back, but the field was soon slowed by a caution for another spin. Clay Greenfield‘s engine expired, but made it to pit road – the yellow was for Tim Viens, who spun in the corner.

The final restart came with two laps to go, Hill and Jones battling again. Creed got a huge run on the penultimate lap, splitting the two for the lead, and Hill fell back into third. Jones and Creed were side-by-side for the better part of a lap before Jones finally cleared Creed’s No. 2 truck, scoring his first career Truck Series victory.

The race’s nine cautions broke the record at Pocono for the series. As for Jones’ Kyle Busch Motorsports team, it was the first time in victory lane for each crewmember.

“When I very first started racing, my entire life – I saw the [No.] 51 late model and I said ‘I want to be with Kyle Busch Motorsports one day and win races,'” Jones said in his post-race interview, “and we finally did it. We’ve been close in the past…that was a heck of a battle. I know it was fun to watch on TV, it was really fun for me there. Got a heck of a push…so that was really fun, all in all [a] great day. I’m pretty pumped, we’ve got another one too so maybe we can get it done.”

“It’s not really that much pressure honestly,” Jones added of the pressure of driving for Kyle Busch. “I think there’s so much that he provides for us. We were all on a call last night with him after the cup race, he gave us so much information that led to this win today, so it’s a group effort. I can’t do it by myself, I gotta have all that stuff to tie the pieces in.”

It was the first of three back-to-back-back races at the triangular track on Sunday and Jones’ first of two on the day. The 60-lap event featured full-time Xfinity Series regulars Jones and Ross Chastain, as well as Parker Kligerman in his first Truck Series event since Homestead of last year.

The Truck Series returns in two weeks at Kentucky Speedway. The race will get underway shortly after 6 p.m. on Saturday, July 11.