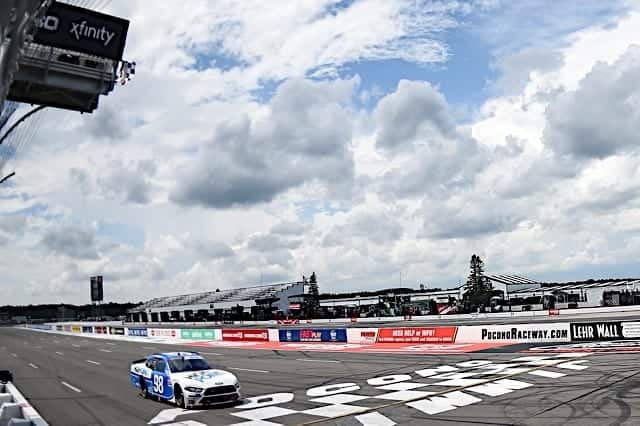 When Chase Briscoe lost the lead due to a spin while leading Sunday’s Pocono Green 225 with 22 laps remaining, thoughts of a victory seemed out of reach to a casual observer.

It turned out to be just the latest obstacle for Briscoe to overcome.

Briscoe rallied from both that spin and a pit road speeding penalty, getting by Ross Chastain in overtime for his fourth win of the season. Briscoe fought his way toward the front from the restart with 19 laps to go, catching the front-running cars of Chastain and Myatt Snider. After a side-by-side battle with Chastain, Briscoe led with seven laps to go before Chad Fincum’s spin with six to go forced overtime.

Tire trouble sends Chase Briscoe around from the lead late at Pocono! He keeps it off the wall. pic.twitter.com/WUP5F3k85A

“I was really tight and I worried that if I got to the bottom that I would be too tight on exit,” Briscoe said. “When I was catching Ross, I knew his trouble end was the tunnel turn, he was so loose. So I tried to use that to my advantage. I knew that was my one spot where I could probably make a pass.”

Second for the second week in a row.@RossChastain recaps the final restart and his race at @PoconoRaceway. pic.twitter.com/zia0TWmllA

As the checkered flag waved, Brett Moffitt and Timmy Hill were seventh and eighth, respectively, with Riley Herbst and Jesse Little rounding out the top ten.

It was Herbst’s best finish since Fontana, Hill’s best since Daytona and Little’s first career top ten in the series.

The caution flag flew for a race record ten times, and none were bigger than the one on the 52nd lap.

Snider and Noah Gragson got together on the Long Pond Straightaway, involving themselves and others to contending for the win – Daniel Hemric, Allgaier, Austin Cindric as well as Ryan Sieg.

This race is crazy.

Cindric and Hemric were unable to continue while Gragson and Allgaier fell off the lead lap.

Cindric led twice for 11 laps and won the first stage.

“I hate being out of the race early, but also hate having a race-winning car and not being able to capitalize on it,” Cindric said.

The start of the race was marred in a big way by the caution flag, with four cautions occurring in the first 20 circuits.

The first came within the first lap. Brandon Jones, fresh off winning Sunday morning’s NASCAR Gander Outdoors Truck Series event, lasted less than a lap, spun after contact from behind by Cindric. The yellow struck again four laps later when Josh Williams got into the outside wall off of turn one, also collecting Joe Graf, Jr.

Harrison Burton suffered his second DNF in a row 16 laps in, spinning off of turn one. A red flag of more than 20 minutes flew in order to clean up fluid on the track that likely contributed to Burton’s wreck. In fact, additional speedy dry was applied before the second stage began, further indicating that oil may have ended Burton’s day early. Alex Labbe spun on the final lap of the first stage but was able to continue.

The cautions were hardly limited to the first stage. On the 48th lap, Riley Herbst was spun by Justin Haley coming down the frontstretch, a move that earned a two-lap penalty for Haley for rough driving and he and his crew chief being summoned to meet with NASCAR officials after the race.

The NASCAR Xfinity Series returns on Saturday for the Pennzoil 150 at the Brickyard at 3 pm on NBC.