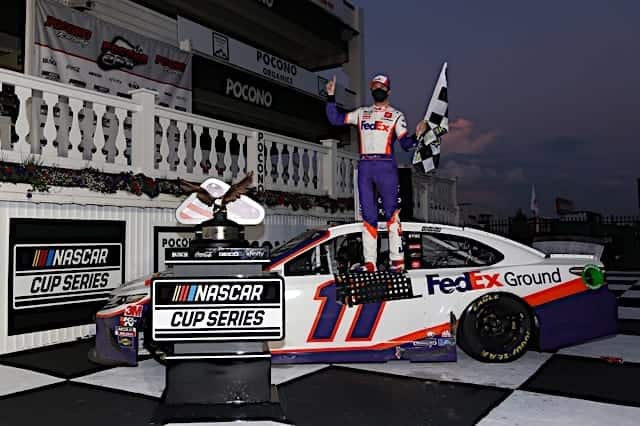 Just before nightfall, Joe Gibbs Racing’s Denny Hamlin has secured his sixth win at Pocono Raceway over the course of his 14-year cup career. Hamlin, driver of the No. 11 FedEx machine, ties the retired Jeff Gordon for all-time wins at the Tricky Triangle. Tying Gordon isn’t the only item marked off the list, however. Hamlin also ties Mark Martin for 41 wins in the NASCAR Cup Series.

As laps wound down, numerous drivers within the top 10 gave up their positions to ensure their tires were fresh and their tanks were full to make it to the end of the race. Hamlin surrendered his lead late in the race for two right-side tires and a splash of fuel but quickly fought back to claim the second race in NASCAR’s first-ever doubleheader weekend. The stars aligned for Joe Gibbs Racing, which has now claimed wins in four of the last five races at Pocono Raceway.

Even after hours upon hours of perfect weather where the Gander RV & Outdoors Truck and Xfinity series were able to run without any weather issues, Sunday’s scheduled NASCAR Cup Series Pocono 350 was delayed due to lightning, then rain.

Shortly after 4 p.m., cars rolled off of pit road only to return after a lightning strike initiated a sport-wide policy that calls for a 30-minute delay for the safety for those in attendance. Within 40 minutes, Austin Dillon and Kurt Busch took the green flag after initial pole-sitter Ryan Preece dropped to the back due to an engine change.

As Kurt Busch, a 2005, 2007 and 2016 winner at Pocono Raceway, pulled away from Ryan Blaney in second, the drivers were called to the pits as the rain began falling in the area. Soon, Air Titans were summoned to begin their work in drying the track. Within the hour, the rain subsided and racing resumed with a bright rainbow as a welcoming backdrop between turn one and the famous Tunnel Turn.

Pace laps continued until lap 12 under the threat of light sprinkles. Upon the restart, Blaney and Kurt battled until Kurt took the lead out of turn two. The oldest of the Busch brothers led until lap 15, when the first on-track caution flew for Michael McDowell. The No. 34 Front Row Motorsports Ford Mustang spun in the tunnel turn after making contact with Chase Elliott and cutting a tire. McDowell, whose vehicle struck the outside SAFER barrier hard, limped to the garage ending his day at the Tricky Triangle after attempting to back-up a strong eighth-place finish at Pocono on Saturday, during the Pocono Organics 325.

Kurt Busch secured the first stage win, all while gaining 10 points toward the playoffs. The second stage restarted on lap 35, with Busch remaining at the helm, who elected to stay out with Blaney while a number of drivers took their chance to pit.

Despite running in the top 10 early on, Christopher Bell’s No. 95 Leavine Family Racing Camry took a whirl-around in turn two, receiving heavy damage to the back end of his stock car. Bell immediately reported to the garage. Moments after the restart, Chris Buescher spun himself in turn 3, slightly backed into the outside wall but remained in the race multiple laps down.

With 10 to go in the final stage, calamity out of turn 2 struck once more, this time, claiming defending series champion Kyle Busch, who was racing Blaney for position in the corner. Replays showed Blaney making contact with the left rear of Busch, which turned him immediately.

Busch’s car was towed to the garage area just before Preece slid out of turn 2, leaving the racing surface between turns 2 and 3, tapping the inside retaining wall. Bubba Wallace, driving the King’s historic No. 43 Chevrolet Camaro, barely missed the incident. Brad Keselowski claimed the second stage win as the sun began to slowly set over the track.

With less than fifty to go, Kevin Harvick, who won the first of two races on Saturday, June 27, slipped into the second position. Happy Harvick took over the lead with 45 laps to go as Keselowski pitted from the top spot. With 35 to go, Harvick entered the pits, surrendering the lead to Hamlin. The driver of the No. 11 car also surrendered his lead with 20 laps to go but quickly reclaimed his top spot with 15 to go after teammate Truex, who assumed the lead moments prior, took his No. 19 Camry to pit road. Hamlin eventually crossed the finish line with a two-second-plus lead over Harvick.

Following Harvick was Erik Jones, Elliott, Aric Almirola and Matt DiBenedetto. William Byron crossed the stripe seventh followed by Clint Bowyer and Alex Bowman who exchanged blows all the way to the checkers. Truex rounded out the top 10.

The NASCAR Cup Series will drive northwest next weekend to race at the historic Indianapolis Motor Speedway for the Big Machine Hand Sanitizer Brickyard 400. You can catch all the action on NBC as Rick Allen, Dale Earnhardt Jr., Jeff Burton and others give you lap-by-lap coverage, beginning at 4 p.m.

Who cares if bubba barely missed the damn wall. Are y’all gonna keep highlighting bubba bubba bubba like dw used to do ! I saw bubba’s white dad was at the race today, saw him on tv. Still puzzles me how bubba is African American. Explain that to me kb .

Why is a “news” that “Bubba” was near the wall…should we be clutching our pearls with angst? This is getting insane.

It’s the little yellow oblong pills your shrink told you to take every 4 hours kb. Not taking them is the reason your face is so red and your screeching. Careful or your going to stroke out. It’s sad that people with your diagnosis aren’t even aware how unstable they are. A pity, no.