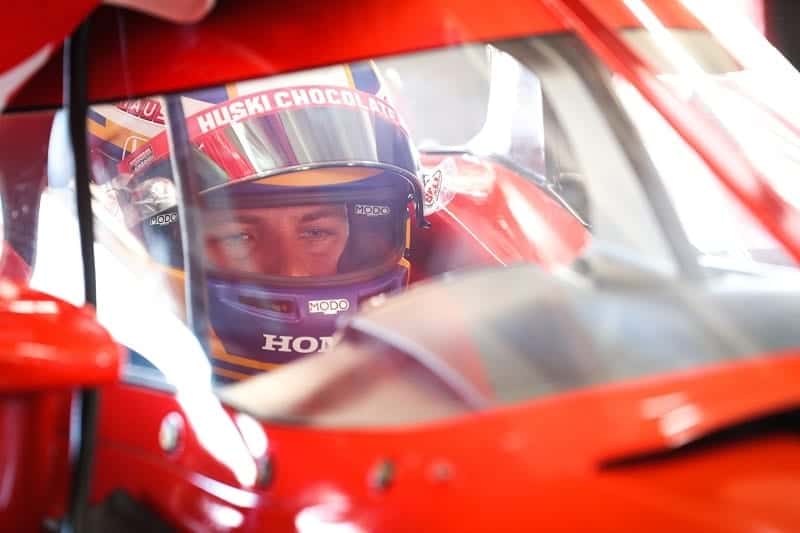 Marcus Ericsson in practice for the 2020 Genesys 300. (Photo Credit: Chris Owens/Courtesy of IndyCar.)

Marcus Ericsson is back for his sophomore NTT IndyCar Series season, but it looks nothing like his freshman year. The 2020 IndyCar season is one of massive change for the Swedish driver—and that’s before factoring in all of the alterations that have taken place around the league this year. So what should fans honestly expect from Ericsson in his second campaign?

Finished 17th in the 2019 IndyCar championship standings. No wins, but was runner-up in the second Dual in Detroit race and posted two other top-10 results.

Marcus Ericsson was involved in the Schmidt Peterson Motorsports shake-up when the team rebranded to Arrow McLaren SP, and moves from there to Chip Ganassi Racing for the 2020 IndyCar season. That also means a whole new crew and new teammates for the sophomore driver.

For me I’m happy with my performance all day in difficult circumstances (Q first). No mistakes and was on for a solid top 8 with 10L to go until a refuelling issue at the last stop meant we ran out of fuel… It was great being back racing and I can’t wait for the next race! #ME8

Ericsson showed some good speed in select races last year, most notably that second-place result at Detroit (where he was beaten by his now-teammate Scott Dixon). His biggest strengths, though, are coming with time. That year of experience in IndyCar should improve his results the second time around, and moving to one of the Big Three teams in Chip Ganassi Racing ought to provide him more resources and knowledge to draw upon.

Plus, he has Dixon as a teammate. There’s no better mentor to have than a five-time IndyCar champion and Indy 500 winner who’s in the process of climbing his way up the all-time wins list. If Ericsson soaks up everything that his new organization has to offer, and is able to combine that with the flashes of speed he showed last year, 2020 should be a round of marked improvement for him.

So far Marcus Ericsson has shown himself to be a very streaky driver. His last seven races of the 2019 season were a huge disappointment, with him failing to finish higher than 11th (not counting the Portland race that he skipped to serve as a Formula 1 backup driver). He also had a block of poor showings from Long Beach through the first Dual in Detroit race, where he didn’t come higher than 13th. Ericsson has to break that pattern and start stringing together good results, or at least minimizing the times that he winds up outside of the top 10.

What happened to him at Texas this year is an example of that. Ericsson could have had a decent result, but ran out of fuel and wound up 19th. Snatching failure from the jaws of success like that can’t happen if he wants to contend, or even hang around in IndyCar.

Ericsson won’t notch his first win during the 2020 IndyCar season, but he should improve upon the shaky results that he posted in his first year. Expect him to register more than two top-10s this season, although he may bobble at Portland since he didn’t race there in 2019. Ultimately, he’ll still have a while to go, but he’ll crack the top 15 in the overall standings and settle into a decent rhythm with good support from Chip Ganassi Racing.