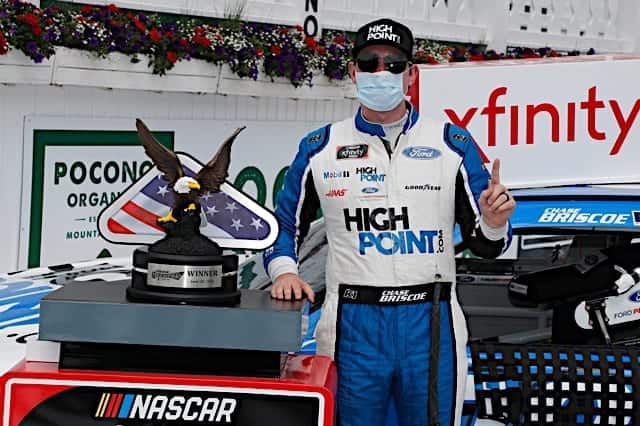 The NASCAR Xfinity Series took to the Tricky Triangle on Sunday afternoon, the second race of a tripleheader across the sport’s three major divisions.

Chase Briscoe scored his fourth win of 2020, rebounding nicely after spinning from the lead on lap 70. Briscoe suffered a flat tire and was forced to pit, but drove back through the field, battled, then passed, Ross Chastain for the lead and drove on to victory lane.

Chase Briscoe’s become the king of comebacks it seems lately. Briscoe also rebounded at Homestead after ballast fell from his car on the pace laps, coming back from six laps down – and constantly outrunning the leaders – to finish seventh. As for Pocono, he battled Chastain, took the lead, spun, recovered from the spin and then outraced Chastain again to take the checkered flag.

Briscoe’s goal of eight wins in 2020 looks very attainable, as well. Briscoe is halfway there already and the season isn’t even to the midpoint – at this rate, he’s mathematically on pace for 10-plus wins this year.

Chastain won the Xfinity Series Dash 4 Cash for the second week in a row. He finished behind teammate Justin Haley at Talladega and was the first car across the line eligible for the $100,000 bonus, with his second consecutive runner-up finish. He found help along the way as fellow Dash 4 Cash competitor Haley was held for two laps on pit road (see below for that incident), and the other eligible drivers – Austin Cindric and Alex Labbe – crashing and spinning, respectively.

Let’s not forget the underdogs – Sunday was a big day for them. Jeremy Clements and Myatt Snider both finished inside the top five, with Snider running well all day. Timmy Hill and Jesse Little scored top-10 finishes of their own, while Dexter Bean, Ryan Vargas and B.J. McLeod made appearances in the top 10 and brought home results inside the top 15.

Brandon Jones spun and crashed on the opening lap right after winning the Truck Series race earlier, eliminating any possibility of a back-to-back sweep for the Joe Gibbs Racing driver. The prior race was Jones’ first career win in the Truck Series, but the hard hit on lap 1 ended his chances in the Xfinity race.

It was a bad day all around for Joe Gibbs Racing, with rookie driver Riley Herbst getting spun on the frontstretch at lap 50. Herbst wasn’t without help, though – Justin Haley expressed his frustration after an earlier incident and turned the No. 18, resulting in Haley and crew chief Alex Yontz being called to the NASCAR hauler after the race.

First off, the ugliest thing about the race was the eerie parallels to the Truck Series race this morning. The trucks got underway shortly after 9:30 a.m. ET, Xfinity around 12:30 p.m. ET, and the similarities began immediately.

Both races had crashes on the opening lap, at least one red flag and three cautions within the first 20 laps. Each race also had a record-breaking number of cautions – nine apiece –, crashes that took out big names and extended red flags to put speedy dry down on the racing surface.

Those big crashes also marred the Xfinity Series race, most notably the melee on lap 54. Snider made contact with Noah Gragson‘s back bumper, collecting a number of cars – among them contenders Cindric and Justin Allgaier. It wasn’t a good look for Snider, considering he and Gragson had their differences at Las Vegas earlier this year.

Several contenders are taken out after this incident on the Long Pond Straightaway! pic.twitter.com/OSck0Pkdvi

I’m going with Myatt Snider. Snider is scheduled for the full season, but only for a few races in Richard Childress Racing’s No. 21, and more than 20 with Ryan Sieg Racing’s No. 93. The No. 21 is by far the more competitive car, and it’s important for Snider to make the most of being in that machine…and he did. Snider ran up front, leading laps and making his presence known, with a fourth-place finish.

Honorable mention to Jeremy Clements, who notched just the fourth top-five finish of his career. Clements slid through the chaos of Sunday’s race and brought the No. 51 home just behind the two dominant cars.

Timmy Hill and B.J. McLeod both pulled triple duty over the four-race weekend at Pocono. Both drivers competed in all but the truck race over two days, running back-to-back on Sunday with Xfinity and Cup.

Meanwhile, four drivers completed double-duty – Chastain, Brandon Jones, Brett Moffitt and Bayley Currey. All four ran back-to-back in the truck race and Xfinity race, with Currey not originally scheduled for the former. He was called upon to fill in for Natalie Decker in Niece Motorsports’ No. 44 truck after Decker was hospitalized with suffering bile duct complications tied to the previous removal of her gallbladder.

“…I felt like if I picked the bottom I could’ve maybe slid [Ross Chastain], but I was really tight, and I was worried that if I went to the bottom I would get too tight on exit. And when I was catching Ross, I knew his trouble end was the tunnel turn – he was just so loose, so I just tried to use that to my advantage. I knew that was my one spot where I could probably make a pass, and it was fun. We raced clean the whole time and it’s always fun when you can do that.” – Chase Briscoe

It was definitely a bizarre race, but its closing laps featured not one but two phenomenal battles between two of the afternoon’s best cars. Briscoe continues to be more or less the favorite for the championship and has won a third of this season’s races.

The Xfinity Series heads west to the Indianapolis Motor Speedway for a race on Saturday, July 4. They’ll get underway shortly after 3 p.m. in the first-ever NASCAR/IndyCar doubleheader, the latter series racing on Sunday. This marks the first time any NASCAR divison has raced on the speedway’s infield road course and will be the Xfinity Series’ first time occasionally turning right in 2020.

One car 22 taken out better than 98,I think they will race hard last half season.