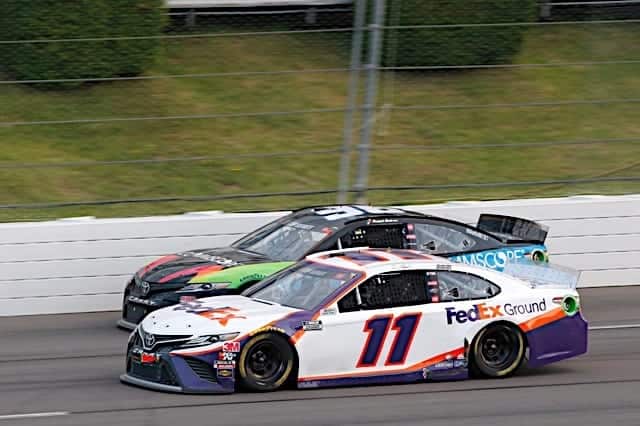 Denny Hamlin is pretty good at Pocono Raceway for a guy who had only raced the track on video games before his first Cup race there. He finished second to Kevin Harvick Saturday, and on Sunday, he did one better.

Hamlin had a fast car but found himself trailing Harvick as the laps wound down. What Hamlin had on his side was strategy. He could stay out for nearly 20 laps longer than Harvick, which meant he could spend less time on pit road for his final stop with 18 laps to go.  Hamlin was able to hold Harvick off after topping up his fuel cell and took home his sixth Pocono trophy for his effort.

While Harvick and Hamlin stole the weekend’s thunder, one of Harvick’s teammates enjoyed an outstanding pair of races. Aric Almirola finished third on Saturday and fifth on Sunday.  That’s following up last week at Talladega where he scored another third-place while sliding backward over the finish line. Almirola was 13th in points entering Talladega; he leaves Pocono in ninth, which is a much more comfortable position as the playoffs get closer.

How about for the first time ever, having all three national touring series racing on the same day? It almost didn’t happen, when lightning and then rain threatened the Cup race, but it was quite a day at Long Pond as fans were treated to 700 miles of racing. The stands were empty, which is a shame each week it happens, but it seems particularly so in summer in the Poconos. Still, almost 12 hours after it started, the big day of racing makes it sting a little less.

Polesitter Ryan Preece had a rough day. An engine change meant he had to give up his top starting spot, and as if that weren’t enough, he went spinning on lap 80 while running 22nd. The No. 37 didn’t suffer much damage and Preece didn’t lose a lap, but any hope of a top 20 went out the window. He finished 25th, one lap down.

Saturday winner Kevin Harvick didn’t make much noise for the first half of the race after starting 20th thanks to an invert, but as the laps ticked away, there he was as Harvick took the lead from Brad Keselowski on lap 95. He’d have to give it up for a pit stop with 35 to go, but he was able to cycle his way to second at the end, leaving both he and Hamlin with an impressive 1.5 average finish on the weekend.

The rookie contenders mostly struggled at the Tricky Triangle Sunday. Tyler Reddick’s No. 8 threw a belt in the early laps, and while he got back on track, he was several laps down and wound up 35th.  John Hunter Nemechek felt the effects of an underfunded car on a big track, but he rallied to a decent-for-his-equipment top-20 run in 19th. Christopher Bell looked like he had a top-five car early on, but a crash on lap 39 ruined his day, leaving Bell 39th for his trouble.  Cole Custer had the best day among the first-year drivers, running in the top 15 for much of the day before dropping a couple of spots in the closing laps and coming home 17th.

Cup Champ Kyle Busch has struggled since NASCAR’s return without practice sessions. Without his car dialed in for him, Busch has yet to win in 2020.  He was looking to change that Sunday, after having Saturday to perfect the setup, but his attempt was derailed on lap 76.  Busch was working on the lapped car of Garrett Smithley when Ryan Blaney got a head of steam behind the pair, and Blaney got into Busch’s left rear quarter, turning him and ending his day in 38th.

Pocono is a different animal when it comes to how races play out.  It races like an oval (mostly, anyway) but the in-race strategy works more like a road course, and the three completely different corners make setups a challenge.

So, while the racing can be dicey – some races are exciting; others are not – this track deserves a place on the Cup schedule. While some fans would like to see it erased, right now, there isn’t a similar track on the circuit, which makes Pocono valuable. If one race could be replaced with a track of one mile or less, the idea is worth exploring.  What shouldn’t happen is replacing this unique track with a cookie cutter.  We’ve seen too much of that, to the detriment of the sport as a whole.

Why… should you be paying attention to this week?

It’s off to Indianapolis Motor Speedway this week for a Fourth of July weekend of racing. Daytona gave up its traditional date in favor of hosting the cutoff race for the playoffs, giving Indy the date instead. What that sets up is something special: a NASCAR-IndyCar doubleheader on Saturday with the Xfinity cars and Indy cars on the road course and the Cup cars on the historic oval Sunday.

While the shortened schedules and lack of testing opportunities mean nobody will attempt a crossover this year, this is definitely something the two series should explore going forward. For years, any possibility was dampened by the fact that the two series had competing companies (Sprint and Verizon) as title sponsors, but that’s in the past.

How about scheduling say, three of these weekends in a season and offering bonuses for any driver to finish in the top 10 of the IndyCar and Cup races? That would bring attention to the stars of both series and make the races even more fun to watch.

How… did the doubleheader work out?

It went off pretty well.  Overall, the weekend could have used a few tweaks, mainly with the start time for the Cup race, because NASCAR got lucky with that one. Had the rain lasted much longer or covered more of the track, the race would have had to be postponed because Pocono doesn’t have lights. As it was, the Truck race postponement made for a marathon day Sunday.

But overall? This format makes sense for a few tracks with two dates. The advantage is that the season could be shortened by at least three weeks if a few of the weekends were packaged this way. The best bets would be races on mile-and-a-half tracks that don’t always produce great racing, with Texas and Kansas being excellent candidates.  Keeping the format at Pocono makes sense.  Then, how about this twist: a doubleheader at Indy with one race on the road course and one on the oval? The road course race could be added without sacrificing another weekend. Unlike Charlotte, where the infield road course setup requires changes to the oval that preclude a quick change, Indy’s setup would allow it.

Once fans come back on a consistent basis, these weekends provide an excellent value, particularly to folks traveling from out of town for the weekend, and that could be good news for the tracks and their camping areas as well. It’s a good evolution.

so are they done racing at pocono for the year?

IDK if it would count as a true “double header” but I would love to see a saturday Cup race at the IRP short track and then traditional indy the following day.

Did Johnson get penalized for hitting the tire on his pit stop?

What really surprised me was Busch not bawling on TV about it. Maybe he realized he’s done the same thing. Oh silly me for even thinking that! I was wondering the same thing about Johnson’s penalty. Also wondered what happened to Blaney that he pitted very late in the race and lost more then 10 positions.

Either they’ve become very selective in what they tell us or they just completely miss it. I usually have to go to a website or social media to get any info. I still don’t know if JJ even got a penalty.

Looking at the Penalty Report (found on Jayski) Johnson was given a drive thru penalty for the tire incident. He served it ion lap 103.