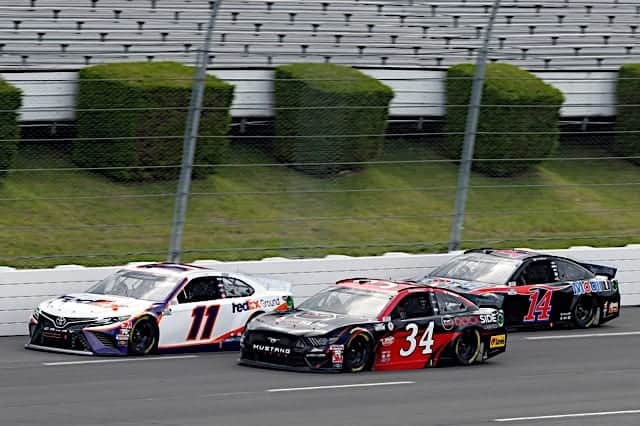 Two races in two days at Pocono Raceway turned into a double feature showcasing plenty of what we have already seen in 2020, starring each of the Front Row Motorsports teammates.

On Saturday, Michael McDowell held the lead role in the show. McDowell led a lap during a sequence of green flag pit stops and wound up with another top 10 finish, coming home in eighth. It was his best ever at Pocono Raceway and marked the first time FRM had a car finish in the top 10 in back to back races.

After the race, McDowell reflected on how the finish was attained.

“That was an exciting run. Strategy was a big part of it today, and Drew made great calls all race long. Our car was really fast on the long run, which allowed us to stay out longer and make good lap times. We ended up only taking two tires during our green flag pit stop late in the race and were able to gain some track position. Luckily, it stayed green the rest of the race and everything went our way. I’m really proud of everyone at Front Row Motorsports; we had a really fast race car all day long. I’m glad that we were able to get a top 10 here and keep our momentum rolling. Now, we’ll reload and get ready to do it all over again tomorrow.”

But in Sunday’s sequel, John Hunter Nemechek was the sole member of the underclass to squeak into the top 20, finishing 19th. JHN’s teammate McDowell found himself at the bottom of the rundown after contact with the wall left him 40th.

After the race, Nemechek spoke about still being somewhat disappointed with the result, saying, “Wasn’t quite the day we were hoping for at Pocono Raceway, but we finished better than we did in yesterday’s race, and that’s an accomplishment for us. Our No. 38 Death Wish Coffee Ford Mustang was decent in clean air, but we just couldn’t make it work in traffic. I was too tight whenever I got behind another car, and we couldn’t quite get the handling right in order to really make the kind of gains we wanted to on track. I’m proud of my team and thankful for their effort.”

Qualified participants in this category is pretty limited due to the fact that in each race, only one underdog managed to finish in the top 20. Few top drivers had trouble, and success at Pocono is prominently dependent on raw speed, typically the biggest deficiency for a smaller outfit. However, I’d be doing Go Fas Racing a disservice if I didn’t mention Corey Lajoie. Lajoie found himself in the top 10 late as the team worked an alternate pit strategy. A solid result hinged on getting a caution which never came, but still, recognition is deserved for that group taking a shot at finishing up front.

The top contenders in the Xfinity Series ran into plenty of trouble on Sunday as one accident after another cleared a path for several teams who rarely see the top 10 to shine. Jeremy Clements finished third, his best since his stunning win at Mid Ohio in 2017.

Joining Clements in the top 10 were Brett Moffitt in seventh and Timmy Hill in eighth, while Jesse Little wound up 10th in his Johnny Davis Motorsports Chevrolet. It was a solid day for the entire JDM group, as Ryan Vargas and BJ McLeod joined Little in the first half of the field, finishing 13th and 14th respectively. Kyle Weatherman brought the Mike Harmon-owned No. 47 home in 15th, tying that team’s best ever Xfinity Series finish.

NASCAR heads to Indianapolis Motor Speedway this week for the debut of the Brickyard as an Independence Day weekend affair. I’d keep an eye on Lajoie. Lajoie finished 19th last year, and Go Fas always seems to be one of the better performing underdog teams there each year.

As for the Xfinity Series teams, they’ll hit a slightly different track on Saturday, tackling the infield road course. The Roval offers a decent comparison for this race. Alex Labbe is an excellent road racer and has a good bit of momentum going after the past couple weeks. Also, Clements has to be considered as a potential dark horse candidate given his ability to hustle around a road course as quick as anybody out there.

The Rhino running in the top 10 after grinding so hard to get back in a car is a cool storyline today. Not sure how many of you follow his story on social media, but the guy is relentless in chasing his dream. https://t.co/ymLtQkJgYj

. @SpencerBoyd “Please don’t forget the straw. I know it’s not quite a drive-thru, but @ChickfilA don’t do that.”

Quote of the day.