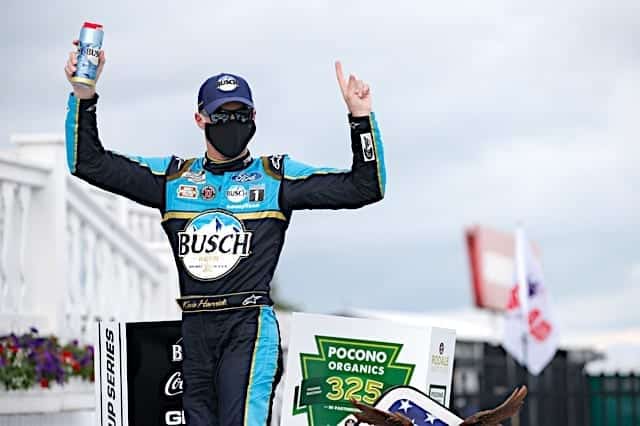 It took Kevin Harvick 39 tries, but he finally won at Pocono Raceway.  Harvick held off a late charge by Denny Hamlin to win the first of two Cup Series races at the triangular track in the Pennsylvania mountains this past weekend.  As a three-time winner in the 2020 season, Harvick continues to build a case as one of the top championship contenders.

Yet aside from the championship, Harvick is chasing another elusive accomplishment: earning a win at every track on the Cup Series schedule.  Pocono was just one of three tracks where Harvick had never won before.  Now that it is crossed off his list, only Kentucky Speedway and the Charlotte Motor Speedway ROVAL remain and it is no coincidence that those two tracks are the newest additions to the Cup Series schedule.  Comparatively fewer chances to race at those venues have more to do with Harvick’s lack of wins than his performance issues.

Few drivers have been able to claim that they have won at every Cup Series track, especially over the long term.  Most drivers who have gotten close in the past found schedule changes to be a difficult obstacle to overcome.  In 2018, Kyle Busch captured his first victory at Charlotte Motor Speedway in the Coca-Cola 600.  At the time, Charlotte was the last track where Busch needed to win to be a winner at every track.  But when NASCAR went back to CMS in the fall, the Cup Series used the ROVAL layout for the first time, introducing a new track where Busch hadn’t won.  Credit Busch for winning at every venue on the Cup Series schedule, if not every layout.

The other active drivers who have won at a lot of tracks may have missed their opportunities to claim victories at venues where they remain winless.  Jimmie Johnson is missing wins at Kentucky, the ROVAL, Chicagoland Speedway and Watkins Glen International.  In his final season of Cup Series competition, Johnson still has a chance to win at three of those tracks.  But due to the revised Cup Series schedule for 2020, Johnson will not have an opportunity to race at Chicagoland.  Unless Johnson comes back for more races in 2021, he will end his career without a win at every track.

Matt Kenseth is in a similar predicament.  He has never won at Watkins Glen, Indianapolis Motor Speedway, Atlanta Motor Speedway, Martinsville Speedway, or Sonoma Raceway.  Kenseth doesn’t have a win at the ROVAL either, though he will presumably make his first start there later this year.  But the ROVAL isn’t the problem.  Kenseth, like Johnson, would need to come back next year for more opportunities to win at Atlanta or Sonoma.  It remains to be seen if Chip Ganassi Racing will have Kenseth back in 2021, or if Kenseth is even interested in racing beyond this season.

Other legendary drivers came close to winning at every track on the schedule in recent years, but nobody was able to complete their list.  At the time of Jeff Gordon’s last Cup Series start in 2016, he had won at every track except Kentucky.  A checkered flag in the Bluegrass state also eluded Tony Stewart, as did a win at Darlington Raceway.  Even Mark Martin, excellent for so many years at NASCAR’s highest level, ended his career without wins at several tracks on the Cup Series circuit.

Based on the experiences of his peers, Harvick has his work cut out for him.  Since Kentucky and the ROVAL host one race a year each, he will only have limited opportunities to win at those tracks for the rest of his career.  Upcoming changes to the Cup Series schedule will also make the challenge more difficult.  Nashville Superspeedway is already set to join the Cup tour in 2021.  Any other new track would provide a new hurdle for Harvick to clear.

But the good news for the No. 4 team is that they have what it takes to check off the two tracks left on Harvick’s list.  In nine previous races at Kentucky, Harvick has six top 10s and an average finish of 10.8.  Considering the strength of Harvick and his Stewart-Haas Racing team at intermediate tracks, it seems like only a matter of time before he rolls into victory lane at Kentucky.

Harvick’s future at the ROVAL is harder to forecast.  He has finished in the top 10 in both starts there, including a third-place finish last year.  He also led 34 laps in the 2019 race but was unable to hold off Chase Elliott in the closing laps.  As far as his overall road course performance goes, Harvick has one win each at Sonoma and Watkins Glen.  The Watkins Glen victory came back in 2006 when Harvick was driving for Richard Childress Racing.  Only the Sonoma win came with Harvick’s current team.  That said, each of the three road courses on the Cup Series schedule has considerable differences.  Mastery of one does not necessarily mean mastery of the other two.  The biggest factor for Harvick’s chances of winning at the ROVAL is simply more time.

Harvick’s current contract with Stewart-Haas runs through the end of the 2023 season, just before he turns 48.  That’s an age that few drivers reach while still being highly competitive.  Yet Harvick only seems to get better with time, and he races for a highly capable team.  It will be interesting to see if he can complete a milestone that so many others have fallen short of meeting.