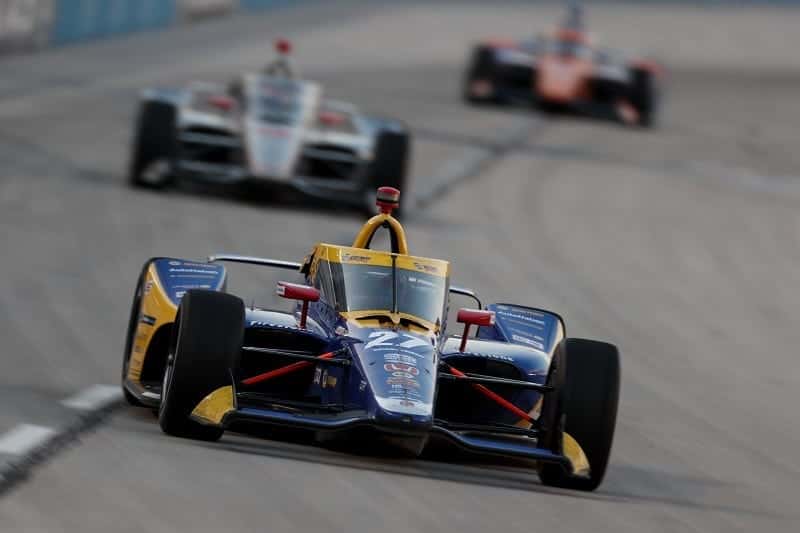 June 2020 was an eventful month for the NTT IndyCar Series, even though there was only one race on the schedule. With all the anticipation surrounding the 2020 IndyCar season after a three-month delay, plus all of the changes that had taken place over the offseason, there was more than enough to talk about.

It was by no means a perfect start to the season. The 2020 Genesys 300 at Texas Motor Speedway proved that almost everyone still has a few kinks to work out. Alexander Rossi, who is a perennial contender, suffered an ECU issue and subsequent penalties that put him toward the back of the field—and he wasn’t the only one who had issues before the race even started.

The fact that Simon Pagenaud and defending champion Josef Newgarden were able to pull off podium finishes despite both dealing with tire vibrations was impressive, as well as a reminder that Team Penske is not invincible, even though it often looks that way.

And the NBC Sports broadcasting crew didn’t have a great night either, misidentifying multiple cars and going to commercial at more than one inopportune time.

Basically, unless your name was Scott Dixon, everyone had some rust to shake off.

But that was to be expected—between leadership changes, aeroscreen changes, several drivers changing teams or having schedules reduced, and then the three mons of extra time off, it would have been strange if there weren’t a few speed bumps when IndyCar returned.

The question is what teams and drivers can learn from Texas so that they can improve for July, which features five races including two double-headers.

Dixon and Chip Ganassi Racing are obviously in the catbird seat at the end of June. The biggest question mark for the No. 9 team, swapping out Dixon’s longtime race engineer Chris Simmons for Michael Cannon, has clearly worked out just fine. Dixon was dominant at Texas and within a razor-thin margin of claiming the pole before Newgarden captured it. If he drives even half as well as he just did, the New Zealander has to be a favorite to win his sixth Astor Cup—but then again, isn’t he always a contender?

Other drivers who impressed include Dixon’s teammate Felix Rosenqvist (if only he could show just a little more restraint and avoid walls), Zach Veach, Charlie Kimball (whose 11th place could have been so much better if not for that last-lap spin) and Ryan Hunter-Reay (who drove like a madman to come in eighth).

That’s a fine mix of both veteran drivers and young talent, and across three different teams—which is a major plus for fans. The best thing about the NTT IndyCar Series is its parity. If lesser-known drivers like Kimball and Veach can continue to mix it up with names like Dixon and Hunter-Reay, this already strange season could be absolutely wild.

As Dixon said before the season started, “Never think that you know everything.” June 2020 was a learning experience for everyone in IndyCar: drivers, teams, broadcasters and fans. Now what happens with everything that we just learned?