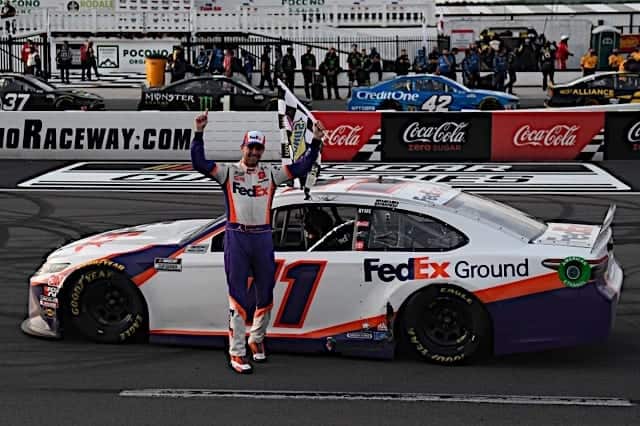 In 2020, Denny Hamlin is showing us why he is one of the greatest drivers of his generation.

Including 2019, Hamlin’s last two seasons have been two of his best other than his near-championship season in 2010. After his win at Pocono Raceway on Sunday evening (June 30), he is up to 41 career victories, and at 39 years old, he has a lot left in the tank.

Is this the best Hamlin has ever been in his 15-year career? Is he the title favorite for 2020?

There are so many up-and-coming stars in the lower series of NASCAR we have already seen succeed. Guys like Harrison Burton and Noah Gragson have shown their talent this season in the NASCAR Xfinity Series with two wins apiece. However, one driver who is proving himself every single week is Chase Briscoe, scoring his fourth victory of the season on Sunday afternoon and showing yet again he is the driver to beat in Xfinity this season.

Is he the only Xfinity driver that is ready for the NASCAR Cup Series right now? Is there a spot for him in the Cup Series next season? What is his potential just for this season?

A: If we look at the statistics of Hamlin’s career, the last two seasons have been two of his best. Aside from 2010, 2019 and 2020 have both been his two best years in Cup. Period.

What is the reason for this? Think about this: Joe Gibbs Racing paired Hamlin with Chris Gabehart at the beginning of 2019. Right out of the gate, the duo won the Daytona 500 together. And with this year’s Daytona 500 win, they have yet to lose one as a pairing. Not even halfway through the season, the No. 11 team leads the series with four victories. Last year, he had six total. In 2010, Hamlin had eight after narrowly missing the title and giving it up at Homestead-Miami Speedway to Jimmie Johnson.

Hamlin has worked with several crew chiefs in his career; such as Mike Ford, Dave Rogers, Darian Grubb and Mike Wheeler. He has had a fair amount of success with everyone he’s worked with, yet Gabehart seems to be the right fit for the Virginia native. To have 10 wins in 47 starts (remember, Gabehart was suspended for four races following this years Coca-Cola 600) is a phenomenal accomplishment. Of course the ultimate goal is to capture Hamlin’s first Cup title, but even so, he is proving how good he really is.

Despite how strange this year has been, Hamlin has not missed a beat. He is on pace to have an even better year than last and 2010. Does that make him the championship favorite so far? Absolutely.

While you have drivers like Kevin Harvick, Brad Keselowski and Joey Logano all having multiple wins this season, Hamlin just seems to be a step ahead of everyone right now. Harvick is probably the closest to him, but Hamlin has just been better.

Even at 39 years old, we are seeing the best of Hamlin. Prime is a touchy word at this age, but he is definitely proving he is the best he has ever been. Just to show how impressive Hamlin’s last year-and-a-half has been, from 2011-2018, he only won 15 races. While that is a fair amount of wins, compared to how much he has won since the beginning of last season, that is a small number. For all we know, he could have more than that in two seasons at this pace.

There is no way Hamlin does not win a title. He is too good of a driver and has too good of a team behind him to go without one in his career. Same could have been said about legend Mark Martin, who is the greatest driver to never get the season-long trophy. Hamlin would be right up there if he does the same. However, 2020 could be his year.

Ever since his rookie season, Hamlin has shown what a driver he truly is. He has only gone winless in one of his full seasons, 2018, and that even includes winning in 2013 when he was on the sidelines for a back injury after the wreck at Auto Club Speedway with Logano.

Never overlook Hamlin, no matter how down he is. We have seen this before: he’s been out of the picture for a year or two and then has a string of phenomenal years like he is currently having. He may be our 2020 champion by season’s end, but regardless, we are definitely seeing the best Denny Hamlin we’ve ever seen before.

Q: If you had to pick one driver from the Xfinity or Truck Series who would be ready to run Cup tomorrow and be successful, who would it be? Michael R., Des Moines, IA

A: There is so much young talent in this sport that it is so hard to pick just one. However, Briscoe is the guy here and for many reasons why.

First off, he is showing what he is truly capable of in the Xfinity Series. He already has four wins in 2020, which is crazy to think with the series just past the one-third mark. Given the situations with no practice and qualifying, that’s what has made it even more impressive. Add on to the fact that he has had an interim crew chief (granted, it’s Greg Zipadelli) for the last few weeks, and he is easily the top candidate to move up to Cup right now.

Cole Custer showed what the Stewart-Haas Racing team was capable of in Xfinity last season when he nearly won the championship. For his three seasons, he was a threat to win daily, especially in his final season in the series last year. Briscoe is picking up right where Custer left off and is maybe even a bit stronger.

The potential for Briscoe is so high, it may be the highest of many guys up and coming right now. The rumors have been circulating as we near that time of year where guys will begin to be looked at by Cup owners and they will have an idea of what their future will look like. Briscoe has to be at the top of the list.

In every stock car series he has raced in, the Indiana native has won. Whether it was grabbing an ARCA Menards Series championship, winning Gander RV & Outdoors Truck Series races or now dominating Xfinity, he has proven how much talent he truly has. There is no doubt in my mind that he will be in Cup in 2021. Could it be with SHR? That has yet to be seen, and we will not know until many more puzzle pieces fall, but he is ready.

There are many people out there that believe Briscoe is ready to move up to Cup and compete on a daily basis with the best of the best. While the rookies of 2020 seem to be having somewhat of a steep learning curve, that may be the case for him whenever he moves up too. However, once he figures it out, he will be a dangerous driver for years in the future.

Let’s not get too ahead of ourselves though, he still has to finish this year in Xfinity. He is easily the title favorite at this point, and it would be no shock to anyone if he wins at least four to five more races along with capturing the title. He is always fun to watch on track, and that will be no different for the rest of the season. Keep your eye on Briscoe, and do not let him out of your sight. He will be here for a long time.