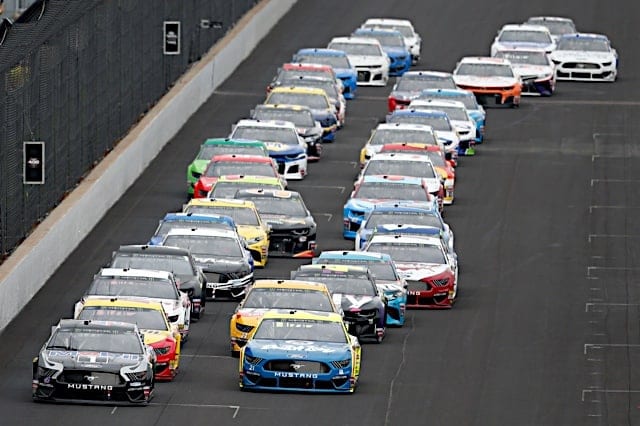 Indianapolis Motor Speedway has produced some great finishes over its more than 100-year history. NASCAR’s history at the track is much shorter, beginning in 1994 when Indiana transplant Jeff Gordon won the inaugural event. Since that race, the finish of a NASCAR race at the track has only been less than half a second five times. Here are the closest finishes at the Brickyard:

As often happens at Indy, even when the finish is fairly close, it was a two-car breakaway, and Rudd held off Labonte for the win. Things got a little wild behind them though, as a pack of cars jockeyed for top finishes and the points that went with every position.

This race will be forever remembered, not for its finish, but for the tire debacle. The tires Goodyear brought to the track were failing left and right, slowing the race time and again. The finish was actually better than the rest of the race though. It’s too bad nobody remembers it.

Busch was on a mission in 2015 after missing the first 11 races due to an injury. He needed to not just win but make up enough ground in points to qualify for the playoffs, and Busch was on fire midsummer, with four of his five wins that year coming in the five-week stretch from Sonoma Raceway to Indianapolis. At Indy, Busch made some bold, aggressive moves late to climb into contention and take home the trophy.

This race was a battle of teammates, as Johnson works to hold off Martin in the final laps. Martin appears to make gains getting into the corners, Johnson holds the advantage off of them, and he’s able to stretch his lead in the final turns for one of his seven wins that year.