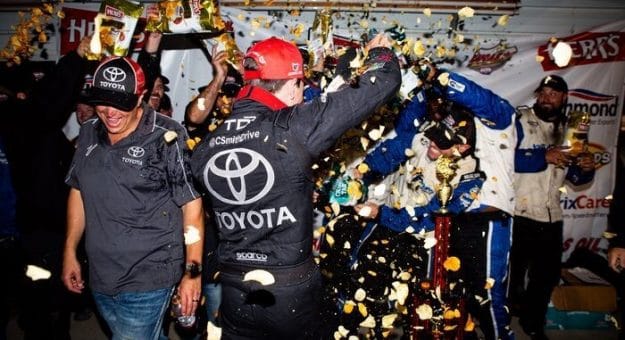 The ARCA Menards Series heads to Lucas Oil Raceway at Indianapolis this Friday (July 3), their third straight week of action after returning amid the COVID-19 pandemic and fifth race of the season.

Last year’s race at the Indiana track was held in October. The event was already moved up to July for the 2020 season, meaning the series will run on the originally intended date.

Defending track winner Chandler Smith returns to Venturini Motorsports’ No. 20 machine, while Joe Gibbs Racing’s Ty Gibbs looks to make it two victories in a row after winning at Pocono.

Despite listing Tanner Gray piloting the No. 17 on Friday, Gray’s younger brother Taylor will take the reigns. It will be his debut in the ARCA Menards Series, he has a combined three starts in the East & West Series’.

Max McLaughlin will once again run Hattori Racing’s No. 1 entry, his third start for the team this season. Mike Basham is entered for Fast Track Racing’s No. 11, his first appearance in 2020.

Driving for Kimmel Racing is Brian Finney, who is making his first-ever start in a car not owned by himself. Meanwhile, Howie DiSavino III comes back to Win-Tron Racing for the first time since Phoenix.

The field will take the green flag for the Calypso Lemonade 200 around 8 p.m. on Friday, July 3. The race will air live on MAVTV and will be streamed on NBC Sports’ TrackPass service.