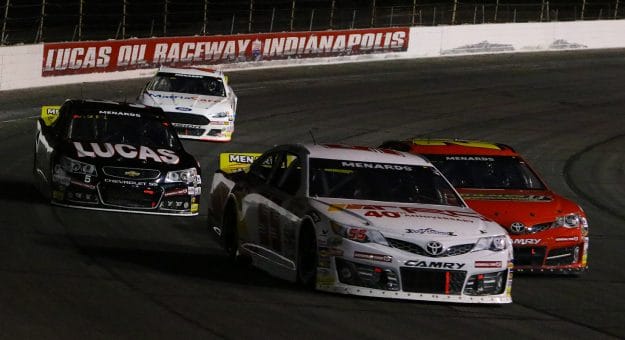 For the 13th time in ARCA Menards Series history, the series visits the Lucas Oil Raceway for the Calypso Lemonade 200. This will be race number five for the series, and after last weekend’s race at Pocono Raceway, the points didn’t budge as Michael Self continues to lead the standings, followed by Drew Dollar. The last time the ARCA Menards Series raced at Lucas Oil Raceway, Chandler Smith tallied the victory against the eventual series champion, Christian Eckes. Smith will look to become just the second driver to earn back-to-back victories at LOR; Bob Schacht earned victories in 1984 and 1985.

COVID-19 played havoc on the ARCA Menards Series season and has played also absolute havoc on the Sioux Chief Short Track Showdown. Salem and Mid-Ohio were postponed to a later date, which moves Lucas Oil Raceway to the second event on the schedule. Smith currently holds the lead in the Showdown points standings followed by Michael Self, Ty Gibbs, Tanner Gray and Zane Smith rounding out the top-five. Neither Smith nor Gray are on the entry list for this weekend’s event.

Sam Mayer finished third in this event last season and third on Friday afternoon at Pocono. Believe it or not, Mayer is still seeking his first career victory in the ARCA Menards Series. Mayer has five career third-place finishes in the ARCA Menards Series and a career-best finish of second in his debut at Salem. Mayer has earned victories in both the East and West Series and is inching closer and closer to that first career victory — which could come Friday in Indianapolis.

Venturini Motorsports’ streak of five victories came to an end Friday as Gibbs absolutely dominated. He said in the Zoom post-race media availability that he should’ve contended at Lucas Oil last season but his tangle with Joe Graf Jr. pushed him out of the race, relegating him to a 15th place finish. Joe Gibbs Racing has victories in the NASCAR Xfinity Series at Lucas Oil Raceway both coming with Kyle Busch (2008 & 2010). Gibbs will look to earn back-to-back victories for the first time in his young career.

The points battle once again looks to be within the Venturini Motorsports organization as Self leads Dollar by 11 points. Dollar has never raced at Lucas Oil Raceway in the ARCA Menards Series but will surely lean on his veteran teammate. Self has a total of three starts with a career-best finish of second in 2017. As noted above, Smith is looking to become just the second driver to earn back-t0-back victories at a track; Smith also said during the Zoom conference that it seemed like the No. 18 will be the team to beat this season. Will that be the case again on Friday?

“I’m very happy to be back with my Venturini Motorsports team and piloting my No. 20 JBL Toyota Camry,” said Smith. “Pocono (Raceway) was overall a good day for us, but we don’t show up to finish second. So we have some work to do to be better. I am looking forward to going to Lucas Oil Raceway this coming weekend for some short-track racing.”

Hailie Deegan earned her third straight seventh-place finish, so it’s lucky sevens for Deegan as the series heads to Indianapolis. Deegan has one previous career start at Indianapolis that came last season with Venturini Motorsports. She finished the race in fifth, her first career top-five finish in the ARCA Menards Series. Since that event, she’s only earned one top-five finish, and that was in the season-opener at Daytona.

“Lucas Oil Raceway is fun,” said Deegan. “I feel like we haven’t raced at a short track in a really long time. It will be nice to mix it up from holding it wide open a lot, having these long straightaways at Pocono, Talladega and even Daytona at the first race. I think this will get everybody back into the groove for short-track racing. That’s what I’ve been used to coming up through stock car racing, so I think we’ll have a good run there.”

There will be a new shade of Gray in the No. 17 this weekend as Taylor Gray, Tanner’s brother, will make his ARCA Menards Series debut on Friday. Gray, 15, has a combined three starts across ARCA’s East and West Series. His career-best finish came last weekend at Utah Motorsports Campus in Tooele. According to the team preview, Gray will pilot this entry in the remaining Sioux Chief Showdown events this season.

“I have a lot of confidence in my DGR-Crosley team going into my first race at Indy,” said Gray. “While I was living in Indy working on my family’s NHRA drag cars, I would always ride by the short track, and now being able to race there this Friday is really cool for me. My goal for the race is to be competitive and gain experience. There is a short practice session in the afternoon, so I think coming home with a top-five finish would be great.”

Bret Holmes has had a solid season so far, and he’s approaching a track he has experience at. In three starts at Lucas Oil Raceway, Holmes has a career-best finish of sixth. Holmes has finished inside the top-10 in all but one event this season, including tying his career-best finish of third at Talladega. Much like last season, Holmes is looking to creep into the ARCA Menards Series Championship picture. He sits 24 points behind points leader Self.

Ryan Huff made his debut at Daytona, and ever since that event, Huff has made an impressive showing with Fast Track Racing. After two straight weekends of defeating his career-best finish, his best is now ninth. Putting his season in perspective, Huff sits ninth in points 55-points behind leader Self. Huff is the last of the drivers who have competed in all four events this season and is battling for the SCOTT Products Rookie of the Year.

After an impressive showing at Pocono in his debut, Derek Griffith makes his return to the No. 22 Original Gourmet Lollipops Ford Fusion. After qualifying order was set by owners’ points last weekend at Pocono, Griffith had to start from the 15th position. He battled a tight racecar throughout the event and noted in the team recap that he “didn’t have the track position to capitalize.” Griffith will have an opportunity Friday to put the No. 22 on the pole as there will be qualifying.

Howie DiSavino III will make his return to the ARCA Menards Series for the first time since Phoenix earlier in the season. Despite not having many starts to his name, one of his starts came at LOR last season. After starting ninth, he had an electrical issue that sidelined him after just 132 laps and thus relegated him to a 16th place finish. DiSavino currently sits 21st in the Sioux Chief Showdown points standings.

Justin Carroll will make his ARCA Menards Series debut behind the wheel of the No. 91 Toyota Camry for Terry Carroll Motorsports. Carroll has raced in both ARCA Menards East Series events this season, finishing sixth at the last East event in Toledo. On top of the two starts, Carroll has 11 other starts in the K&N Pro Series East with the best finish of second at South Boston in 2018. On the pit box for Carroll will be NASCAR veteran Jim Long. Long has 315 starts as a crew chief with three victories in the NASCAR Cup Series (Ricky Rudd: 2 & Terry Labonte: 1) and one victory in the NASCAR Xfinity Series with Kyle Busch in 2005. Long was last seen in the ARCA Menards Series last season with Travis Braden.

RSS Racing will make their ARCA Menards Series debut Friday with Kyle Sieg behind the wheel. From the look of the photo below, they have purchased equipment from Chad Finley Racing. The news comes following the announcement that RSS Racing would shift its focus from three cars down to a single car, handing over the reins to Josh Reaume for the No. 93 car. RSS Racing is actively seeking sponsorship for this entry.

Exciting news: We are going ARCA racing with @KyleSieg39 this Friday night. We purchased a few cars and plan to get Kyle some seat time. The operation will be led by veteran crew chief Bruce Cook. Sponsorship on this car available – email marketing@ryansiegracing.com pic.twitter.com/iSkbVgCqQJ

McLaughlin and Carroll will be the only drivers invading the ARCA Menards Series from the East.

Friday’s Calypso Lemonade 200 at Lucas Oil Raceway will go live on MAVTV at 8 p.m. ET and can be streamed live on NBC Sports TrackPass.