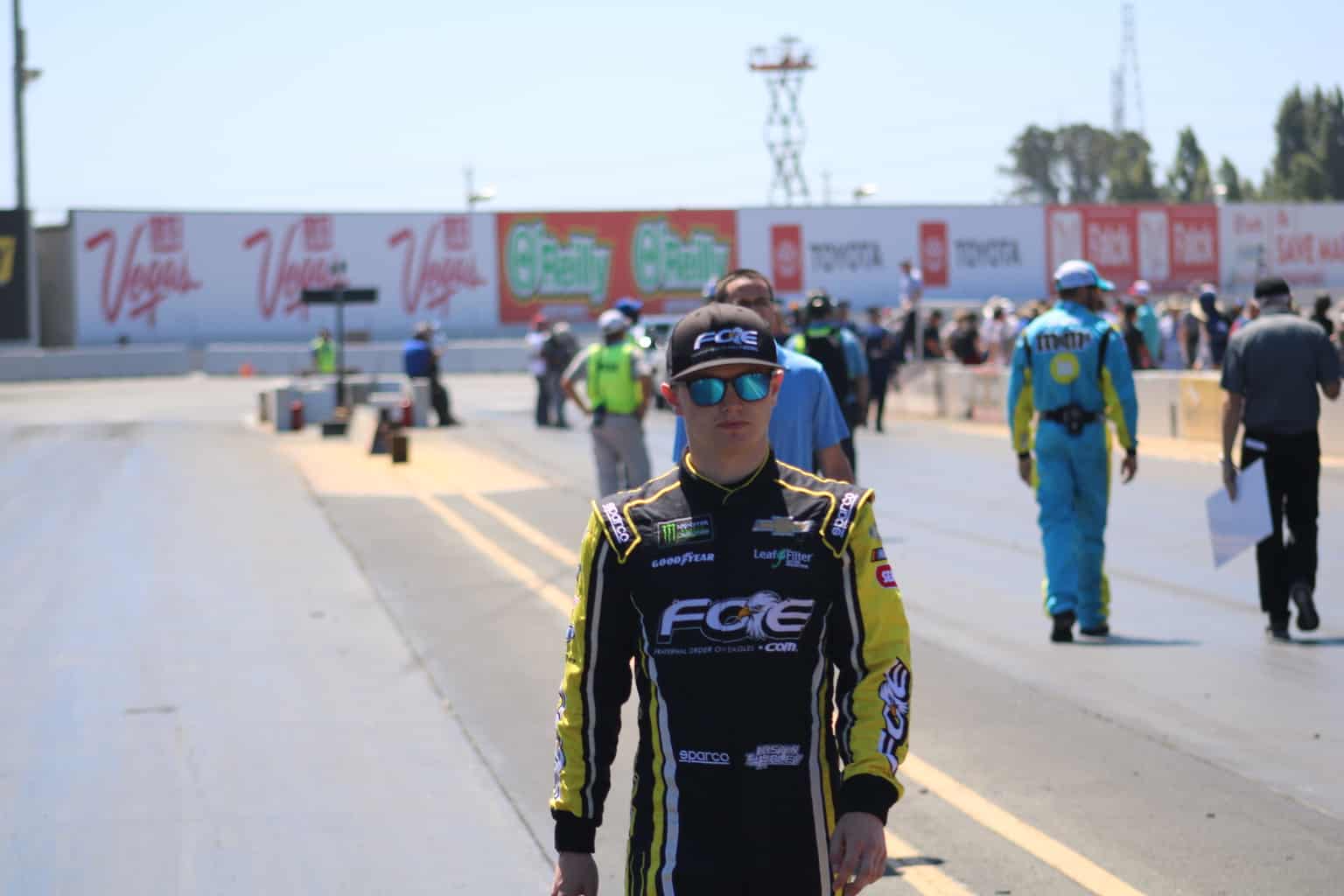 Kyle Busch hasn’t scored a single playoff point in 2020 and is winless after 15 races. What’s wrong in Candyland?

Erin Campbell: Kyle Busch is already experiencing burnout. He started out this long trek of races running in all series for every race. I feel that Kyle has just been doing too much. He now has his family and his Rowdy Energy drink company, along with his racing commitments as a driver and as an owner and travelling each week, sometimes to multiple tracks each week. He’s got a lot on his plate.

Christian Koelle: Considering if he hadn’t won at Homestead, we’d be talking about a year without Kyle Busch victories, that is wild. Meanwhile, Denny Hamlin has gone on to earn four victories, Martin Truex Jr. has one, and Erik Jones technically has that victory from The Busch Clash at Daytona, something is wrong with the No. 18 camp. One thing you do have to look at is the different drivers that have been in the top 10 as of late; those names including Almirola, Nemechek, McDowell, etc. The competition factor for being inside the top 10 has improved massively, and I think that its taking adjustment time for Busch. One thing about Busch, though, is that he isn’t anywhere near the cutoff line, so he may be brewing up a can of something for the Playoffs. After all, race wins are great but championships are better.

Frank Velat: Every driver goes through this. Even in the peak of their careers, guys will hit a lengthy (or at least, lengthy for them) stretch of races where their performance has seemingly fallen off. Dale Earnhardt in 1992, Jeff Gordon in 2002, Tony Stewart in 2008, and most recently, Jimmie Johnson in 2017 are all classic examples of drivers who set a standard of performance that went from impressive to expected. It’s not that anything went wrong other than the fact that they had established a level of success that was going to be impossible to maintain. Kyle isn’t floundering, and just because he hasn’t yet won more trophies than he can hold doesn’t mean he forgot how to acquire them.

The Cup Series has run 11 races over the past six weeks. With no off weekends remaining, will there be a point when fatigue might start to affect a team’s performance?

Koelle: This hasn’t really ever been a problem in the past. This is the time where we have a ton of races all in a row, and I don’t really see anything changing. I don’t really feel like that’s where the fatigue will kick in; it’ll kick in because we’re racing back-to-back and teams have to be up so early just to get tested and passed through all of that. I feel like that is where things start to add up on someone’s body.

Velat: I don’t see it becoming an issue. If anything, the restrictions that the COVID-19 pandemic has brought about actually make things easier. Sponsorship obligations are minimal since the functions and VIP meet and greets have gone by the wayside. Also, fewer team members are on the road each week, so a handful of the ones who usually travel now can spend that time at home. The schedule has always been grinding, but of late that seems to have less to do with the races themselves and more with all the other activities that typically come with being a top driver.

Campbell: The team who wins this year’s Championship will be the one who can outwit, outplay and outlast. The season is already treacherous enough in a regularly scheduled year. This year nothing has been usual, and many tracks have had drivers racing twice, some three times in a few days. Teams have to prepare multiple cars for multiple tracks on tight deadlines. Then there is the outlier aspects of family obligations. Many drivers have had babies over the season so far; those late night escapades already wear people out. I cannot imagine having the schedule they have and adding on the challenge of a newborn.

Justin Haley was penalized two laps because NASCAR deemed his driving too aggressive. Was it the correct call?

Velat: No. We’ve seen much more egregious examples of intentional contact go unpunished. I’m not really sure what pushed NASCAR’s button on this, but Haley got the short end of the stick.

Koelle: Considering Riley Herbst had little to no damage from the accident and rebounded to finish ninth, I really don’t feel like it was the right call. Haley and Herbst were clearly just racing for position, and as we could see on the last lap of the Cup race Sunday, let them race. It’s also been kind of inconsistent; Noah Gragson did the same thing to Myatt Snider at Las Vegas and there was no call to do anything, so I feel like either lay down the line or don’t. It’ll iron itself out further down the road for sure, being as Herbst is near the cutoff line and Haley is locked in. Could it come down to a role reversal if Herbst misses the playoffs, more than likely? Otherwise, both drivers are really just racing for their seeding in the playoffs.

Campbell: NASCAR needs to stay out of racing incidents. They cannot determine if that wreck was retaliation or just a racing incident. If they start interjecting in instances such as this one, then where are they supposed to draw the line for other instances and determine the motive behind the action? Where was NASCAR when Dale Earnhardt Sr. turned countless people into the wall for countless reasons? Did Earnhardt get penalized once for them? No. NASCAR needs to be consistent and they cannot be consistent with calls like this because they will never know what the motive was for the drivers in the cars. Eventually, it will take away the competitive fire for these drivers and end up with lukewarm racers because they have to perform a certain way on the track.

Which current KBM driver will have the most successful career?

Campbell: Christian Eckes has already started out with a solid career in the Gander RV & Outdoors Truck Series. Consistency is the name of his game. It is the name for ANY successful driver. Since coming back from the COVID-19 break, he began at Atlanta with a 14th-place finish, an eighth-place finish at Homestead-Miami, and at Pocono he was involved in an accident which resulted in a 33rd-place finish. He has good equipment and a good driving record, which is what will make him successful.

Koelle: If we’re including Chandler Smith, then him. If not, Christian Eckes by a longshot. It’s no offense to Raphael Lessard but he’s barely raced in the ARCA Menards Series, and I feel like that is starting to catch up with him. Eckes just needs to find his grove and get it going because that’s what he did in ARCA. I want to pop a bag of popcorn for Smith’s return to Trucks at Michigan here in a few weeks because that guy is like that baseball player in the farm system you just know will kick some tail. Eckes and Smith are the future of Toyota, and I feel like further down the road, you’ll see Toyota pick up a smaller team to expand. After all, they lost William Byron and could lose either Erik Jones or Christopher Bell here soon just because they are running out of places to put them. Harrison Burton will also be another driver that they’ll need to make room for.

Velat: KBM used to be the gold standard in terms of churning out top talent. Guys like Christopher Bell, Erik Jones, William Byron, and Noah Gragson all passed through KBM and left plenty of trophies to decorate the lobby. The team could look at funded drivers and pick the best one. Now, I think the talent pool is substantially less among drivers who can afford a ride with KBM. The most skilled truck racers in the series are elsewhere. Toyota has Derek Kraus, who I think is their best prospect in trucks. Chandler Smith is the best long term option at KBM, but none of the current assortment is anywhere near as good as the ones who came before them.

Kyle Busch is winning in the Truck series. Maybe he should return there full-time and spend time working with his drivers instead of publicly critizing them.

Riley Herb$t is not to go without blame. He is obviously irritating drivers to get them upset at him.

Erin Campbell sorry but you are wrong, Dale Earnhardt was once given a 5 lap penility for taking the air off of another drives rear, He did not touch the other car just removed the air and the car spun, So do a little more fact checking before you say something, check your NASCAR history and you will see this story is true