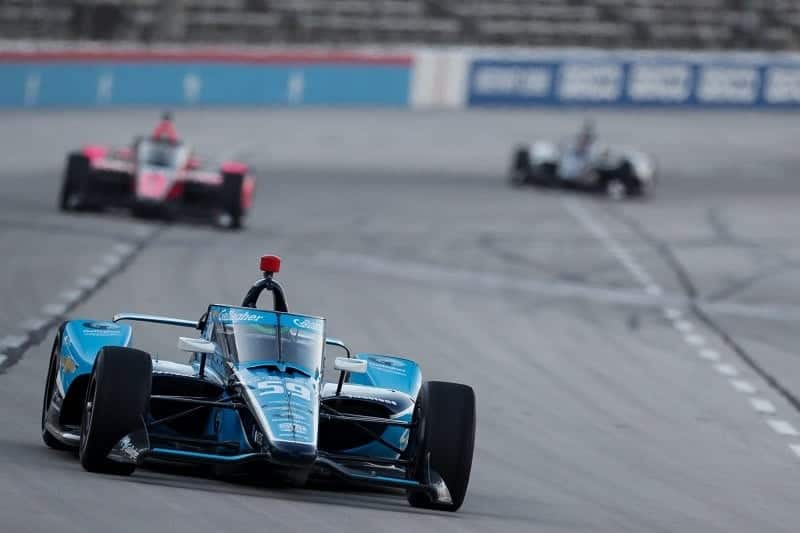 Indy cars on track at the 2020 Genesys 300. (Photo Credit: Joe Skibinski/Courtesy of IndyCar.)

The NTT IndyCar Series is about to turn up the heat in July 2020. With the league trying to get the most out of a shortened 2020 IndyCar season schedule, doubleheader weekends are the name of the game—meaning that there will be twice as much to lose for teams that fail to post results.

There are five races scheduled this month, and four of them are part of doubleheaders. The GMR Grand Prix at Indianapolis Motor Speedway (on July 4) is followed by back-to-back events at Road America (July 11-12) and then Iowa (July 17-18).

Teams then get another almost three-week break, and after this, they’ll need it.

This is the first campaign with more than one doubleheader on the schedule since the 2014 IndyCar season. Even then, the events weren’t taking place on consecutive weekends. Fans have seen with the Dual in Detroit how much one of these outings can pummel a driver and their crew—now imagine doing four races in nine days. It’s a stress test that even Jon Taffer would cringe at.

After all, there are very valid reasons why IndyCar left Detroit as the only doubleheader on the schedule, and we’re probably about to see most of them.

The good thing about this busy schedule, of course, is that it gives drivers who performed poorly in last month’s 2020 Genesys 300 a chance to make up ground in the standings.

For example, Alexander Rossi crushed everyone under the wheels of his No. 27 car at Road America in 2019; Rossi seriously needs points after technical issues led him to finish 15th at Texas. If he wins one race in 2020 he’s back in the mix; if he wins two, he could be the new championship leader. (And such a thing can be done—remember that Graham Rahal once swept the Dual in Detroit.)

With the introduction of road courses to the schedule in July, IndyCar fans will also see some drivers make their 2020 debuts. Max Chilton will get behind the wheel of the No. 59 entry for Carlin at Indianapolis and Road America, with Conor Daly moving over to Ed Carpenter Racing during those weekends. Dalton Kellett, Sage Karam and Spencer Pigot will also hit the track for the first time this month. We’ll get to see how they adapt to the challenges that their competitors faced at Texas.

In total, there will be five NTT IndyCar Series races in 15 days during this month. The drivers who can keep up will rack up enough points to enter the title conversation (and potentially provide a buffer for later missteps), while those who stumble may crush their Astor Cup hopes before July is over.

One last note: fans will need to remember that the Road America races are split between NBC Sports Network and NBC in 2020, and as such, they also start at different times. Race 1 will air in the evening on NBCSN while Race 2 is broadcast the following afternoon on NBC. Luckily, that’s the only time that such a thing is scheduled to happen this season.