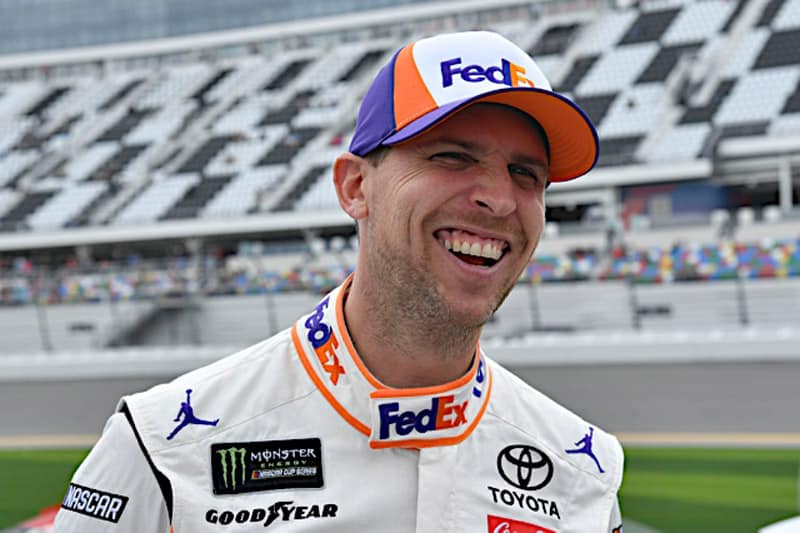 With his fourth win of the season at Pocono, Denny Hamlin looks like the driver to beat for the 2020 championship. Still, that doesn’t mean you pencil Hamlin as your 2020 NASCAR Cup Series champion. Anything can happen from now to November. Here are five examples of things to avoid if Hamlin wants to win a championship.

If there was a championship that was someone’s to lose, Kyle Busch in 2008 is a prime example. Winning the regular season championship simply doesn’t guarantee the driver will win it all in the playoffs. It was a feast or famine type of a year. In the first 26 races, Busch had eight wins, 15 top fives, 17 top 10s and a 9.9 average finishing position. He had races where he was a non-factor and others that had champion written all over them. Pre-Chase, he feasted a lot, but after the second Chase race, he was in a famine. Busch was down to 12th in standings after his engine failure at Dover and was not in the championship hunt. He had a 19.1 average finishing position in the Chase races while only climbing back up to 10th in the standings. While Busch would finally get his first championship seven years later, a third championship would have been sweeter for the Candyman.

What started a consistent threat in the 2002 season ended prematurely with seven races to go for Sterling Marlin. Marlin captured the points lead by the second race of the season and had won two of the first five races. Even though Marlin ran into some bumps in the summer months, he was holding the points lead by September.

After finishing fourth in the Southern 500, his fortunes went downhill from there. At the second Richmond race, Marlin and teammate Jimmy Spencer were crashed out by lap 8. Marlin finished dead last in the 43rd position, though he still held a slim nine-point lead after leaving Richmond. After finishing 21st at both Loudon and Dover, Marlin slipped to fourth in the standings. The next race at Kansas ended his season with a hard crash on the back straightaway. Marlin’s injury created an opportunity for Jamie McMurray to win in his second career start at Charlotte Motor Speedway. Sadly for Marlin, he never reached the top 15 in points again after 2002.

3. Letting Someone Else Take You Out: Ricky Stenhouse Jr and Scott Speed 2008

The 2008 ARCA championship was a rare instance of two drivers giving up the championship. Ricky Stenhouse Jr. and Scott Speed were the drivers to beat in 2008. Speed was the more dominant driver in terms of wins, but head to head they were in a dead heat. Then, came in the quiet Justin Allgaier. Allgaier won at New Jersey Motorsports Park and Talladega Superspeedway to put himself in contention. Meanwhile, Speed and Stenhouse had problems at Talladega, and Allgaier suddenly found himself in the hunt for a championship. When the race started, Stenhouse knew he had to make something happen to win the championship as he was 90 points behind Speed. Stenhouse moved Speed out of the lead and into the wall early in the race. After the restart for Speed’s crash, Speed sped right into turn one, taking out Stenhouse. Speed was parked and Stenhouse got back on track to finish in 25th. Allgaier won the race and the championship because two drivers took themselves out.

4. Having One Race in the Playoffs Ruin a Championship: William Byron 2016

As William Byron faces uncertainty with his 2021 future plans, he has to be hoping his 2020 campaign does not end up like his 2016 NASCAR Gander RV & Outdoors championship run. Byron won five races before the playoffs and looked like a favorite to be in the final four. At the first race of the playoffs, Byron punched his ticket to the Round of 6 with a win at Loudon. When the Round of 6 started, Johnny Sauter was going to be in the Championship 4 with his two wins at Texas and Martinsville, meaning three spots remained. Byron was in the hunt for a spot and started on the pole for the penultimate race at Phoenix Raceway with a five-point cushion. Byron led a commanding 112 laps before having his engine expire with nine laps remaining in the race. All his championship hopes went up in smoke as he missed the cut for the Championship 4. Ironically, Bryon won the finale at Homestead, so if he wouldn’t have blown up at Phoenix, Byron would have been your 2016 Gander RV & Mountain Series Champion.

5. Having the Final Race Ruin a Championship: Mike Skinner 2007

Sometimes everything goes right up until the last race of the season and it still isn’t enough. Mike Skinner looked like the clear favorite to challenge Ron Hornaday for the 2007 Gander RV & Outdoors championship. Skinner amassed an incredible average starting position of 2.5 during this season. In the first eight races, he won three straight races and six straight poles. Skinner built a 164-point lead after his fourth win at Kentucky. The wheels started falling off after that. After two bad finishes at IRP and Gateway, Skinner and Hornaday were gridlocked for the points lead. Week after week, Hornaday and Skinner would trade the points lead. After leaving 29 points ahead of Hornaday at Phoenix Raceway, which was the second to last, race, all Skinner had to do was finish ahead of Hornaday to lock up the championship. Everything was going to plan until lap 25. Skinner took over the lead from Jon Wood and was pulling away until Skinner slowed on the track as he thought he had a flat tire and pitted. Skinner was a lap down for most of the race while he waited for a caution. The caution came but it was Skinner who had his hub fail, causing the tire to fall off and come up onto the track. Skinner had to head to the garage to fix the hub. Even though Skinner returned to the track, nobody else fell out of the race except for Jacques Villeneuve. Hornaday finished seventh while Skinner finished 11 laps down in 35th position — and more importantly, finished behind Hornaday by 54 points.

These are cautionary tales for what could happen down the stretch. Hamlin could have a playoff run like Erik Jones had last year, where he had a best finish of 36th in one round, and be eliminated. Hamlin is no stranger to injuries as he had a hand injury in 2006, tore an ACL in 2010 and injured his back in 2013 after a last-lap crash. If Hamlin keeps his rivalries and ballasts in check, Hamlin can easily be in the Championship 4, but as we’ve seen in the past, even that doesn’t mean he’ll claim the title when it’s all said and done.