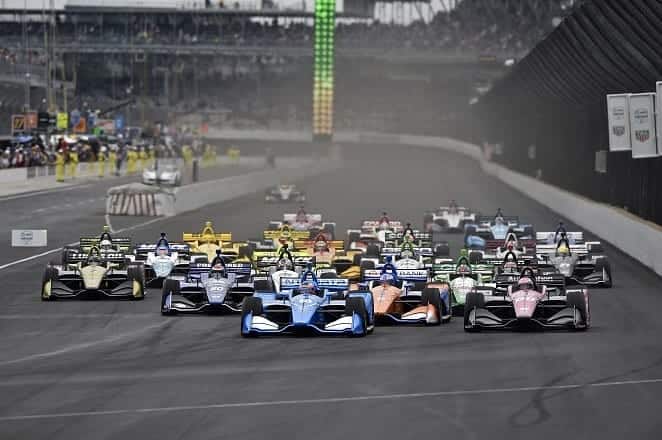 The start of the 2019 IndyCar Grand Prix. (Photo Credit: Chris Owens/Courtesy of IndyCar.)

The 2020 GMR Grand Prix brings the NTT IndyCar Series back to its home on the holiday weekend. The race that was formerly known as the IndyCar Grand Prix kicks off an incredibly busy month for IndyCar, and is the only event in July that’s not part of a doubleheader.

That doesn’t mean there won’t be things to talk about when teams take to the Indianapolis Motor Speedway road course. Team Penske’s Simon Pagenaud will be looking for his second consecutive win there, and fourth since this event began in 2014. Many other drivers will just be determined to nab points and not fall further behind after last month’s 2020 IndyCar season opener at Texas. Look closer at this weekend’s race in our 2020 GMR Grand Prix preview.

How to watch: The race airs on NBC at 12:00 p.m. ET on Saturday, July 4. There is no dedicated post-race coverage scheduled, due to the network airing its NASCAR pre-race coverage immediately afterward. Fans can also stream live timing and scoring through INDYCAR Race Control.

What happened in 2019: Pagenaud won the 2019 IndyCar Grand Prix, despite leading only five of the 85 laps, for his first race victory since the 2017 IndyCar season. Scott Dixon led 39 laps and finished second, with Jack Harvey in third. Dixon’s teammate Felix Rosenqvist captured his first pole position at this event, then unfortunately caught fire on pit lane mid-race; he would recover to finish eighth.

What to watch for in 2020: Obviously, all eyes will be on Team Penske at the start of the 2020 GMR Grand Prix, since every single one of these events has been won by either Pagenaud or Will Power. But that’s not the only reason to keep an eye on them—two of the three Penske cars suffered serious tire vibrations at Texas, and it was impressive that they were still able to nab podium spots with the issue. Texas is known for tire problems, so this shouldn’t carry over to the Indianapolis road course, but the only way to be sure is to see how they perform Saturday.

Keep an eye on teams’ strategy calls; don’t be surprised if a team or two is particularly aggressive on strategy. Everyone will want a good result going into two grueling doubleheader events over the next two weekends. Especially if they finished badly at Texas, there could already be some desperation that comes into play.

Plus, see how many times the NBC Sports broadcasting crew makes reference to the Indianapolis 500 during this event. They normally mention the Indy 500 a couple of times during the Grand Prix, but especially now that the 500 has been postponed to August and with fans not permitted in the stands for this race, that number will likely go up.

Drivers to watch: Outside of the Penske organization, there are a number of drivers of interest in the 2020 GMR Grand Prix. Jack Harvey had the best drive of his IndyCar career in this race last year; can he do it again as his team at Meyer Shank Racing takes on their first full season?

Several drivers will make their 2020 IndyCar season debuts in this race. Max Chilton, journeyman Sage Karam, and rookie Dalton Kellett will get behind the wheel for the first time on Saturday. Chilton finished 18th in the Grand Prix last year (though he does have a top-10 result at this track), while Karam did not compete here in 2019.

And last but certainly not least, Tony Kanaan‘s streak of consecutive IndyCar starts will officially come to an end on Saturday when Kellett takes his place in the No. 14 A.J. Foyt Racing car. Kanaan will have started 317 straight races.