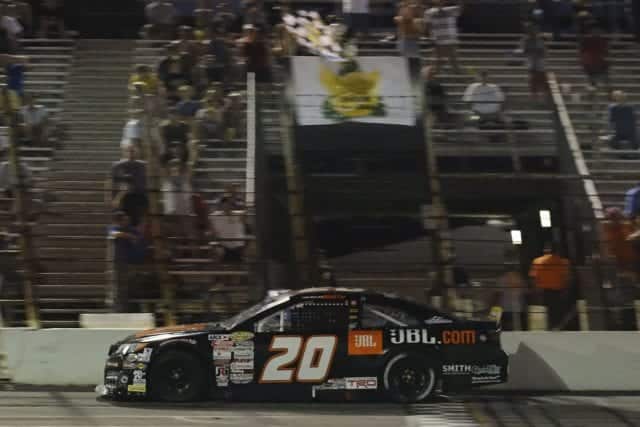 Bob Schacht was the first to do it in 1984 and ’85. On Friday night, Chandler Smith became just the second driver to go back-to-back in ARCA Menards Series competition at Lucas Oil Raceway. Smith had to hold off a hard-charging Sam Mayer, but the charging wouldn’t be enough as Smith earned the victory, the ninth of his career. Mayer finished in the second position for the second time in his young career.

Smith and Ty Gibbs started the race off on the front row, with Gibbs blasting away with the lead early. Smith kept the No. 18 within his sights and at lap 39, Smith caught Gibbs. The two traded for the lead multiple times throughout the next 15 laps before Smith finally took the lead back. The No. 18 was taking the bottom line attempting to make it work, while Smith was using the dominant line midway through the track.

Smith was able to lead when the caution for the first break was displayed. While Smith rocketed away, Gray made his move to the inside of Gibbs for second just as the yellow flag was displayed. Gray, just 15-years old, was a rocket ship during the first chunk of laps, managing to make the pass for the lead when Gibbs himself battled to pass the lapped car of Max McLaughlin.

When the green flag was shown to get things back underway, Smith rocketed back to the lead while Gray and Michael Self raced for third. Self would hold the third position while Mayer, Deegan and Gray all battled for fourth. On lap 88, the No. 18 began slowing and would come down pit road. After lifting the hood and pulling the left-rear tire off to check the battery, Gibbs’s team was ultimately forced behind the wall; he’d be relegated to a 15th-place finish.

With Gibbs out of the picture, the Venturini Motorsports teammates of Smith and Self would battle it out for the lead while Gray, Mayer and Deegan contested the rest of the top-five.

As Gray and Self fought for second, the doors were being used. Entering turn 1 on lap 125, Gray began to lose it and ultimately whipped around without making any contact with the wall, bringing out the only incident-related caution flag.

With the caution coming out before the break, a shootout would ensue, and Smith would dominate leading into the second and final break of the evening. Once again, Smith would rocket away as the green flag came out to start the final segment of the race.

With 21 laps to go, Self had a left-rear tire go down just after Deegan made the pass on him for third. There was no contact between the two.

The action picked up big time with 10 laps remaining as Mayer and Smith both battled for the lead. Smith began inching further and further away from Mayer and without any issues, he’d earn his ninth career victory in the ARCA Menards Series.