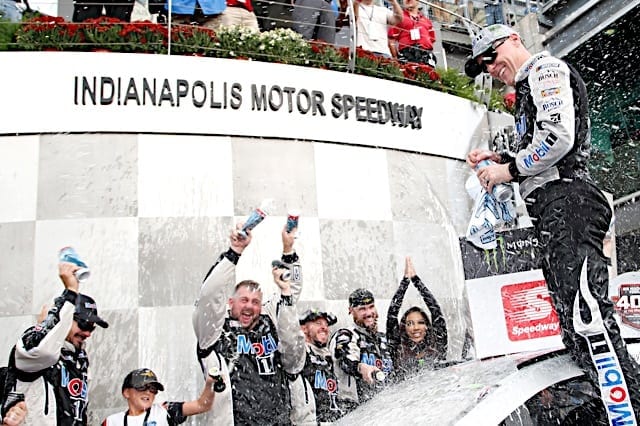 For just the second time since 1959, the Cup Series race held on Independence Day weekend will not be at Daytona International Speedway. Instead, it will be held at another iconic venue: Indianapolis Motor Speedway. The Big Machine Hand Sanitizer 400 airs Sunday, July 5 at 4 p.m. ET on NBC.

IMS is a 2.5-mile rectangular oval with mostly flat banking. Cup competitors have only raced there once a year since 1994, so quite a few drivers don’t have as much experience at the Brickyard as their veteran peers. Also, like previous weeks, there won’t be any Cup practice sessions, erasing on-track time which could prove to be a challenge for young rookies. At least these drivers have had several races since coming back from the pause in competition due to the COVID-19 pandemic. But freshmen may have trouble getting up to speed at one of the sport’s most intimidating racetracks.

Track position at IMS often proves crucial. A driver can easily lead over 100 of the 160 laps in the race and win (like last year). Where a driver qualifies is crucial in filling out your roster; a lot of drivers starting at the rear may take all race to move up.

Before I move on to this week’s picks, let’s review last Saturday’s results from Pocono Raceway.

On the plus side, the winner was in this lineup, as Kevin Harvick earned his first win at the Tricky Triangle. But glaring issues popped up for Tyler Reddick and Erik Jones, both of whom were involved in the same wreck that put them behind. Jones did rebound to a third-place finish on Sunday… although it didn’t wind up helping me here.

216.25 points were needed to double your dollar in the $1 single entry double up, while 246.5 was the minimum cashing score in the $1 Happy Hour.

“Surprise, surprise, surprise.” Well, actually, it’s no surprise that Harvick would be here, since he led 118 laps from the pole in last year’s dominating performance. Sporting the best average finish at the Brickyard, Harvick is currently on a six race top-10 streak, all with Stewart-Haas Racing. He’ll definitely be a favorite once again on Sunday.

Unfortunately, Harvick starts just outside the top 10 (11th), so he’ll have to lean on crew chief Rodney Childers’ strategy to get him near the front. That isn’t impossible, though, as Childers did just that last Saturday at Pocono. Harvick led only 17 laps, but that was all he needed to take the victory. The No. 4 Ford driver hopes to carry that momentum to Indy.

Hamlin is the other one who had a stellar Pocono weekend, as he and Harvick finished one-two both days. Last Sunday, Hamlin led 49 laps and notched 20 fastest laps en route to victory; he scored 86 DraftKings points as a result. Since Darlington’s first race in May, the No. 11 Joe Gibbs Racing driver has earned eight top fives, including three victories, in 11 races. It’s a hot streak I don’t think will end anytime soon.

Although Hamlin doesn’t have any wins at this prestigious venue, he still has six top 10s in the past eight events. He also led 37 laps two years ago and was in the DraftKings perfect lineup in each of the past couple of years, according to Linestar. Could 2020 be the year Hamlin gets to kiss the bricks?

Indy hasn’t exactly been kind to DiBenedetto, but he did gain eight spots to finish 18th last year. Also, he avoided several wrecks and gained 19 positions in 2017 to finish eighth. Remember, DiBenedetto is driving the No. 21 Ford for Wood Brothers Racing. That’s the same car Paul Menard drove to a couple of top 10s at Indy during his tenure.

DiBenedetto has four top 10s so far this season, including a sixth last Sunday at Pocono that gave him 40.5 DraftKings points. He has four other instances of scoring 40 or more DraftKings points in 2020. If he could do that at Indy, at this affordable price, it would help you win your daily fantasy contests.

OK, so Kenseth hasn’t had a great return to racing since his 10th-place finish at Darlington in May. But he finished 11th and 12th last weekend at Pocono, earning 44.5 and 30 DraftKings points, respectively. Could his bad luck at Chip Ganassi Racing be behind him? He sure hopes so.

Even though Kenseth has had a rough year, the No. 42 Chevrolet driver has four top fives and five top 10s from 2013-2017 at IMS. He’s never won here, but did finish runner-up three times in his career at the track. Former Cup regular Kyle Larson also led five laps at IMS last year driving Kenseth’s current car.

Considering Kenseth’s a former Cup champion, the price is pretty cheap for him and won’t break your bank. Another successful run at Indy on Sunday could make the difference on you cashing in.

Wallace loved his car last year and raved about it all weekend long, and he had good reason to, nabbing a podium finish. The No. 43 team could have a similar result Sunday if he has enough speed and avoids trouble.

Wallace has also had a fairly strong 2020 season thus far, earning two top 10s and nine top 20s. The No. 43 Richard Petty Motorsports driver might be starting a bit high for my liking (17th). But the loss of position differential points wouldn’t matter if Wallace powers forward for another top-five result.

Note: I also like Chris Buescher and Ty Dillon in this range. Both are starting farther back than Wallace and can get extra points for each position they gain on the track.

McDowell had an up-and-down weekend at Pocono, seesawing from eighth on Saturday to dead last on Sunday. Still, prior to that negative performance, the No. 34 Front Row Motorsports wheelman had six straight DraftKings scores higher than 30. In fact, he had four topping out higher than 40.

McDowell also has one top 10 and nine top 20s so far this season, results which are much improved from previous years. Add in three consecutive top 20s at IMS and it makes him a true darkhorse pick. McDowell will start 27th on Sunday, but if his car has similar speed as recent weeks, then he should again score big on DraftKings.