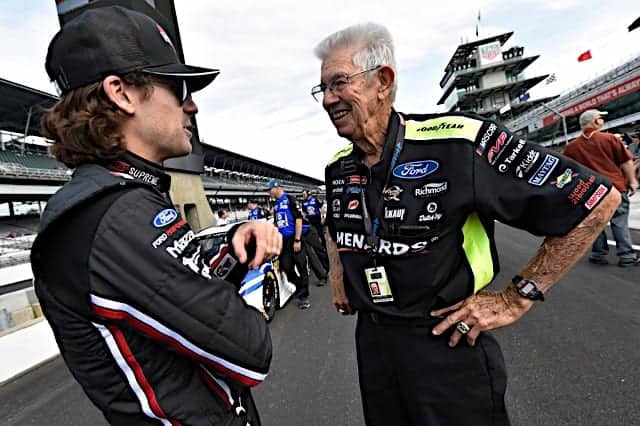 This weekend marks 26 years of NASCAR at the most hallowed ground in all of motorsport, Indianapolis Motor Speedway.

While the Brickyard 400 is usually a fairly boring race and is dramatically lower in prestige than the Indianapolis 500, racing at Indy is a special experience for anybody who gets the opportunity. You haven’t made it as a race car driver until taking the green flag to start a race and feeling that familiar bump as the vehicle goes over that iconic set of bricks.

This weekend was already very newsworthy, being the very first NASCAR-IndyCar double-header weekend in history. But the weekend took another turn on Friday evening, as it was announced that Jimmie Johnson had tested positive for COVID-19. The seven-time champion will be missing the race on Sunday, with veteran driver Justin Allgaier stepping into the No. 48 Chevrolet for this weekend. It’s unclear exactly how long Johnson will be out, but all are hoping to see the legendary driver and his family recover from this illness, and for Johnson to return to finish out his final season in NASCAR. Not to trivialize this situation, but now may be the time to make some changes if you decided to already set your lineup this week, and it involves Johnson.

Also, with only 0.1 points awarded for each lap led by a driver, the need for a dominator is less important when building a winning lineup. The 160 lap race this weekend will only have a total of 16 points up for grabs in this category. Take note when building your roster and focus on mid-pack competitors who can climb up toward the front on race day.

It might be getting a bit boring picking Harvick every week. But the simple reality is that Harvick is having a fantastic year, and it’s hard to actively ignore somebody this good at a track where they’ve had so much success in the past.

Blaney doesn’t have a stellar record at Indianapolis, but he has stepped up there since joining Team Penske. In his two starts there in the No. 12 Ford, Blaney has 11th and ninth, while leading 20 laps.

The most Indianapolis-like track on the circuit is the also flat Pocono Raceway, which has a turn modeled after Indy and is the same distance. There, Blaney has done at least a little better, with a win in 2017. And with his victory at Talladega Superspeedway a couple of weeks ago, Blaney is all but locked into the playoffs, and he and crew chief Paul Wolfe can afford to take some chances now over the summer. One of the best ways to win at Indy is through strategy, and Wolfe has won multiple races in the past by being on the right side of it.

“That Jones boy” should be a favorite for this weekend, but isn’t for one very fatal flaw: he crashed out of two of his three starts at Indianapolis.

The one start that he did not, 2018, he finished a close second to Brad Keselowski. Combine that with his amazing statline at Pocono, and this guy is an absolute steal for fantasy this week.

Although he crashed out of the second race, Bell definitely turned some heads in the first race at Pocono last week, getting his first ever top five finish in Cup. Going into a similar track this week, Bell should be the best possible rookie to have on fantasy this week.

Every summer the last few years, a Toyota driver who had a slow start to the season and is in danger of not being in the playoffs turns it up in the mid-to-late summer. While Matt DiBenedetto and Jones failed to advance in spite of some remarkable runs in those seasons, this is a new, uncertain year. Bell seems like a prime candidate to really break out in this summer stretch prior to the playoffs.

LaJoie performed adequately last year in this race, finishing 19th and on the lead lap. That’s nearly seven positions higher than his average finish last year, meaning the race was much better than average for this small Go FAS Racing team.

The No. 32 is actually making a bit of a jump this season, having an average finish better than last year and contending for top twenties every race, usually ended up with them. What’s more is that he’s one of the few drivers at this tier where I trust that he stay on the lead lap over a 40-some lap span, with how much better that team is then at say Rick Ware Racing or Starcom Racing.