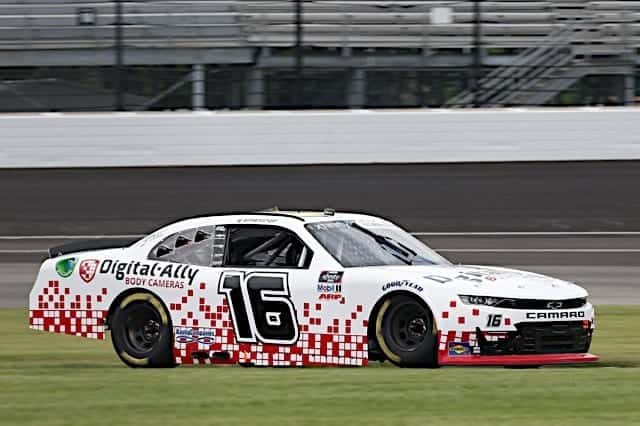 For the first time ever, NASCAR will employ the Indianapolis Motor Speedway road course for a July 4 NASCAR Xfinity Series contest, the Pennzoil 150. In preparation for the inaugural event on the circuit, the sanctioning body opened the track for two practice sessions on Friday (July 3), marking the first time in 120 days that the series held practice due to NASCAR’s COVID-19 accommodations.

AJ Allmendinger and Austin Cindric quickly established themselves as the fastest men in town after leading the sessions. Allmendinger’s fastest lap of 97.323 mph in his Kaulig Racing No. 16 Chevrolet was good enough to pace the first session ahead of fellow road-racing ace Cindric.

Chase Briscoe, Justin Haley and Justin Allgaier followed to round out the top-five drivers. Allgaier’s JR Motorsports teammate and provisional polesitter Jeb Burton wound up 15th on the board in his Chevrolet.

However, incidents in the session were aplenty. As drivers got their first glimpse of the track, the turn 12 and 13 complexes were quickly established as the trouble spot. Numerous drivers including Allgaier, Ryan Sieg and Michael Annett went off-roading in the corners after braking miscalculations. Brett Moffitt and Joe Graf Jr. nearly collided in that same section.

Over in turn 1, both Josh Williams and Brandon Brown found trouble and went off course. Miraculously, all drivers escaped damage in practice, although Moffitt cut a tire down late in the session.

Of the 38 cars entered, only 34 elected to go out in the first bout as BJ McLeod, Vinnie Miller, Matt Mills and Chad Finchum sat on the sidelines.

In the second session, Cindric went to the top of the board with an average speed of 95.850 mph on his fastest lap, quickly followed by Allmendinger in second.

Once again, Haley, Briscoe and Allgaier rounded out the top-five positions. Further down the leaderboard was Jade Buford in 17th. Buford, a regular competitor in sports car racing, is making his first-ever NASCAR start this weekend.

Additionally, Preston Pardus, Brandon Gdovic and Mike Wallace are all making their first starts this season. Pardus ended up 13th while Gdovic and Wallace were 19th and 27th respectively, both of whom are returning to the series after several years of absence.

Trouble continued into the second session, but this session the actioned was focused around turn 7 as Allmendinger, Allgaier, Annett and Jeremy Clements got into predicaments. On the other side of the track, Graf went for a spin in turn 1 early but once again, no drivers suffered any damage.

The Pennzoil 150 is scheduled to go green at 3:00 p.m. ET on Saturday, with television coverage provided by NBCSN.