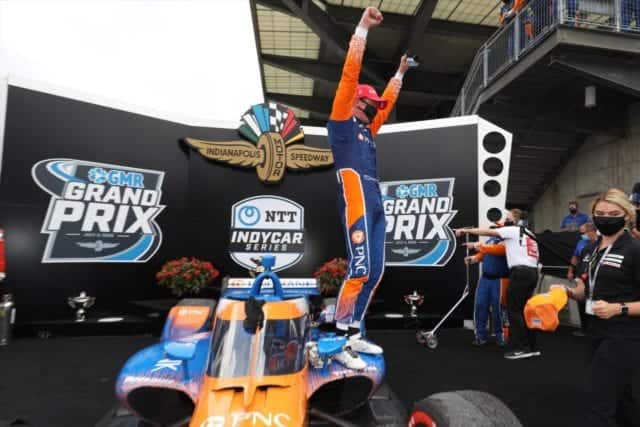 The NTT IndyCar season’s second race of the year, the GMR Grand Prix, took place on the Indianapolis Motor Speedway road course. It was a weekend of firsts; the first time the Grand Prix took place outside of the Month of May in ages, the first NASCAR-IndyCar doubleheader, the first time IndyCar raced on the July 4th weekend, and the first-ever IMS road course win for Chip Ganassi Racing driver Scott Dixon, who secured his second race win of the 2020 season.

A clean first lap saw polesitter and IMS road course maestro Will Power maintain the lead, almost immediately pulling away from second-place starter Jack Harvey. By the third lap, Power had extended his lead to almost a second over the entire field. Unlike the wild season opener at Texas Motor Speedway, the first laps were characterized by just a few position changes down the field, the biggest mover being Spencer Pigot of Rahal Letterman Lanigan Racing, who moved up from 16th to 12th in the first five laps.

Will Power had led 36.33% (182/501) of all laps contested by IndyCar on the Indianapolis Motor Speedway road course going into today.

Pit stops began within the first 10 laps, with Ed Carpenter Racing’s Rinus Veekay coming in first, followed by James Hinchcliffe, Simon Pagenaud and Dixon among others. Going into the race, drivers were torn between a two- or three-stop strategy, but it quickly became clear that the three-stop would be the way to go for much of the field as the track grew hotter. Leader Power and much of the top 10 remained on the track, seeming to opt for the two-stop option.

Dixon, however, proved that sticker red tires were the way to go; as soon as he hit the track, he quickly moved his way up to 12th place, running almost two seconds a lap quicker than the leaders. Power opted to give up on the two-stop strategy on lap 18 and came in for tires. Having started the race on his sticker red tires, he had to settle for slightly slower scuffed reds. Harvey followed suit. Cars left on a two-stop strategy at this point were Graham Rahal, Conor Daly, Pigot and Santino Ferrucci. Rahal maintained the lead until it came time for him to pit on lap 26.

The two-stop cars had significant problems in the pit lane. Both Pigot and Ferrucci lost a wheel nut during the tire changes, and Daly very nearly stalled as he left the pit. Rahal filtered back onto the track in fourth place, 10 seconds behind Power, who had reassumed the lead.

On lap 34, Dixon, Pagenaud, Ryan Hunter-Reay and Colton Herta hit the pits. Dixon reported problems with his car that needed significant changes to prevent them from eroding performance.

Two laps later, rookie Oliver Askew at Arrow McLaren SP crashed in turn 14, setting off the first yellow flag of the weekend. He got loose coming out of the final turn and was unable to catch the car as he lost control, later referring to it as an “unacceptable” crash. The crash threw a monkey wrench into the carefully calculated pit-stop plans that each of the teams had organized. Dixon was in a perfect position to capitalize on the yellow, having just pitted prior to the flag while his main competitors had not done so previously.

We are live on NBC now: https://t.co/rMuieUlBOh#INDYCAR

When the green flag flew on lap 41, Rahal assumed the lead while Pigot battled Sage Karam, who was a lap down. Pigot filtered into second followed by Daly, Dixon and Herta. Alexander Rossi came into the pit lane soon after with an electronics problem that produced a lack of power. He stalled in pit lane and immediately fell out of contention, both in the race and in the championship. In an interview, he identified it as a possible fuel pressure problem.

On lap 48, Dixon took the lead from Rahal. He opened up a five-second lead within the next two laps, proving that he once again came into the weekend with a solid strategy.

Currently, the all sit outside the top 10.#INDYCAR

Pit stops for Daly, Rahal and Pagenaud came on laps 54 and 55, followed soon after by Dixon. The CGR team was preventing disaster; should a caution fly later in the race, Dixon would not then be caught out without pitting. Unfortunately, Dixon’s air hose was unplugged. Without fresh air, Dixon would have yet another struggle to overcome. Power, who had such a successful first half of his GMR Grand Prix, followed up with a disastrous second half when he stalled on pit road. After that, the running order solidified as Dixon continued to gap the field and as drivers spaced out.

As the race neared its last five laps, Andretti teammates Zach Veach and Marco Andretti both went for off-track excursions, but neither warranted a yellow flag. Dixon certainly must have breathed a sigh of relief knowing that he would maintain his near-20 second lead over the field.

Scott Dixon in the No. 10 came across the finish line first at the GMR Grand Prix, taking his first ever win at the IMS road course and his second win of the season. His 48th career win comes in time to secure him as points leader in the championship standings. He was followed by Rahal, Pagenaud, Herta and rookie Veekay to round out the top five. Each of the top-five drivers race for different teams.

“We’ve had so many runner-up spots… but as soon as we got the balance right, the PNC Bank No. 10 got it right,” Dixon said after the race, referring to the fact that Dixon has been runner-up at the road course but never won at the track. “Graham Rahal was super fast. Just happy we had that little bit of luck that put us in the right direction.”

Dixon’s performance at the 2020 GMR Grand Prix has proved that he will be the driver to be reckoned with this season.