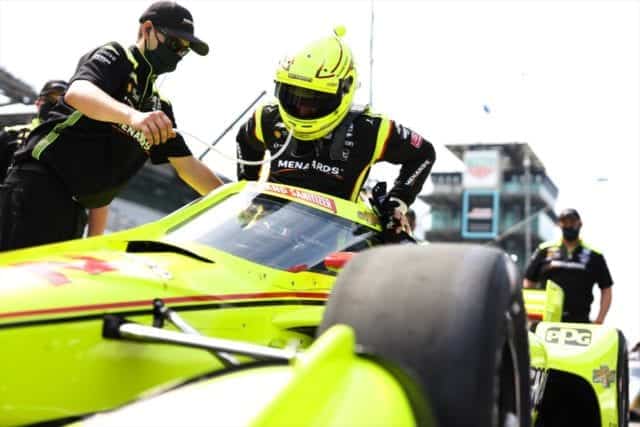 The 2020 GMR Grand Prix is Simon Pagenaud‘s race to lose. The Team Penske driver has three wins in this NTT IndyCar Series event, including last season, which was part of a Month of May sweep. Before he aims for his fourth victory at the Indianapolis Motor Speedway road course, Pagenaud spoke to Frontstretch about the reasons for his success—and why he’s already looking ahead to the IndyCar championship.

Brittany Frederick, Frontstretch: Simon, how excited are you to return to Indianapolis Motor Speedway again, given not only your success there but also this being the first time in the 2020 IndyCar season?

Simon Pagenaud: Racing in Indianapolis to me, it’s what we’re all about. Obviously, our name is INDYCAR. I’ve always loved the Indy Grand Prix because it really sets the tone going into the month of May. It just showcases what INDYCAR is about—road course racing, then the week after that we usually go into the Indianapolis 500…diversity in terms of tracks and talents. I really enjoy it.

FS: Everyone wants to know how you’re so successful at the IMS road course. Have you zeroed in on what works so well for you in this event? And not just you, but your team, as Will Power has the only other victories here.

SP: The Grand Prix has been very blessed for me. I’ve had three wins there; I hope I can get to number four. It’s definitely the goal this weekend. But it definitely changed my life last year…My personal pressure is off because I’ve achieved my dream. Now I can really focus on myself and getting the best out of myself, which is what I really enjoy the most.

What I know for a fact is that Will and I have a very similar driving style. I had the chance to score a win with the Schmidt Peterson Honda when I was there. That was the inaugural Grand Prix, 2014. As a smaller team taking on the big team, that was a lot of fun.

I joined the powerhouse of Team Penske and we’ve been able to carry on the tradition of winning at the Grand Prix. I’m very proud of that. I feel, again, very blessed that we have the program to be able to contend for wins everywhere we go. Team Penske, we put a lot of work in; we work really well as teammates as well.

That’s one of the things with Will—we have a very similar driving style, but that doesn’t mean that we’re the same speed in every corner. Some corners he’s better than me, some corners I’m better than him. We share a lot. We talk about it, talk about how to set the car up. We’ve been able to make the whole program better that way. Josef [Newgarden] contributes a lot to that as well. We have phenomenal engineers that are able to bring some ideas on how to develop the car in a better way for that track or another track.

But I do think there’s a little bit of mystery as to why sometimes you go to a track and you have more luck than you would at a different track. All I can think of is Detroit; I’ve never had much luck there. It doesn’t mean I’m not a good driver. I go to the Grand Prix and most of the time I’ve had good luck.

FS: You mentioned the pressure being off you now. When you come to the GMR Grand Prix, how much does your previous success change your mindset? Are you more relaxed or perhaps even more hard on yourself since you know what you’re capable of here?

SP: I think as a driver, when you go to a track where you’ve won before, a track where you’ve had good success, you just have a level of confidence. I’m going into the Grand Prix with very high expectations of myself and my car and my team. I’m going there to win the race. I’m not going to be third. I’m not going in thinking I could be fifth or sixth or seventh. The goal is to win.

Quite frankly, that’s the only thought I have. But there are a lot of things that’s going to happen, a lot of things out of my control. All I can do is the best I can. Certainly with the team that I have, obviously you expect to win.

FS: What are your thoughts overall about the 2020 IndyCar season so far? You had a runner-up result at Texas even with vibration issues, and now you’re coming to your best track. Is this a pivotal weekend for you in the big-picture sense?

SP: It’s quite a bit different for me because I’ve been with Team Penske for six years. Same engineer [Ben Bretzman] for many, many years—actually almost a decade. I’m going into the road course at Indy with the goal to win the race, score more points. We started the season really well in Texas. I feel this year we can’t be any more ready, quite frankly, despite the situation.

I’m 100 percent full throttle right now in my head. I’m really in a good space mentally to go to this racetrack and score as many points as possible. I’m definitely thinking championship right now.