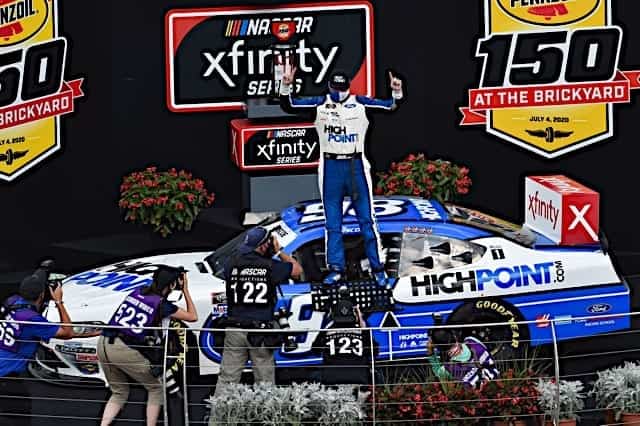 NASCAR was not in Daytona Beach this Fourth of July weekend. Instead, stock cars partnered up with the NTT IndyCar Series for a patriotic doubleheader at the brickyard, the historic Indianapolis Motor Speedway (IMS). Just hours after the undefeated Scott Dixon claimed the Grand Prix win, Chase Briscoe took the NASCAR Xfinity Series checkered flag at the Pennzoil 150.

This year, however, was quite different as IMS transformed from their traditional four turns to a 14-turn 2.439-mile road course. This race marked the first time a NASCAR stock car ran the infield backroads of IMS. While the NASCAR Cup Series has raced at IMS for 27 years, 2020 marks the eighth year the Xfinity Series has raced at the authentic raceway.

At random, JR Motorsports dominated the front row, with Jeb Burton and Michael Annett bringing the field to green right at 3 p.m. Though Burton gained an advantage early, Brandon Jones took the first position while racing out of turn 6 before being knocked back to third as Justin Allgaier and Austin Cindric took first and second position respectively shortly after. Penske’s Cindric took Allgaier’s lead away after battling for three laps.

The first on-track caution came at lap 17, while Vinnie Miller in the No. 78 Camaro limped around the circuit with a shredded tire. What was left of Miller’s right-rear Goodyear Eagle detached from the car, causing officials to throw the caution due to debris. This allowed for Cindric to secure the first stage win of the day under caution at lap 20.

Stage two took the green flag on lap 23 with Jones and Riley Herbst at the helm. Briscoe quickly took the top spot from the Toyota drivers while being challenged by Cindric who flexed his skills early in the race.

On lap 26, Bayley Currey in the Mike Harmon Racing No. 74 Camaro stopped in turn 13 trying to make it to pit road. After a quick caution, Briscoe and Cindric restarted first and second, with Cindric taking back first position once more. However, within laps, Cindric was called out by NASCAR officials for jumping the restart, necessitating a pass-through penalty. Despite having to serve the penalty, Cindric blamed Herbst in the No. 18 Camry for pushing him ahead.

The third on-track caution came with six to go in the stage, when Jones’s day came to an end in turn 9 after the rear of his Joe Gibbs Racing Camry became engulfed in flames. The race restarted with two to go in stage two and Ryan Sieg in first. Briscoe quickly reassumed the lead, claiming his third green-and-white checkered flag of the season. Notably, Cindric worked his way up to the top-15 after his penalty. Cindric finished the stage in 12th position.

Briscoe and Allgaier brought the field to the restart at lap 44. Within a matter of laps, Cindric fought back to become a threat to the leaders up front. Cindric quickly dove deep into turn 7 and moved into fourth position over Justin Haley. With 13 to go, Cindric moved to overtake Allgaier for the third position after locking up his tires heading into turn 1, trying to outbrake the JRM driver.

With 10 laps to go, Tommy Joe Martins in the No. 44 car struck a wall, leaving debris on the frontstretch. This caused the fifth on-track caution, which saw the leaders return to pit road, hungry to be victorious at the first IMS road course challenge. With fast pit stops all around and a stack-up heading to the yard of bricks, Preston Pardus in the No. 36 and Kyle Weatherman in the No. 47 led the field back to green with seven laps to go.

In turn 1, Briscoe drove up the middle, reclaiming the first position with AJ Allmendinger following. In a chaotic restart, a number of cars spun in turns 12 and 13, though the race remained under green. On lap 57, Allmendinger challenged Briscoe and as they circled around to turns 13 and 14, Cindric closed the gap to the leaders, making it a three-car battle for the lead.

With four to go, Briscoe overdrove in turn 8, giving up the lead to Allmendinger and Cindric and an intense battle for the lead coming to three to go. Briscoe rallied back quickly, however, as the leaders separated briefly by a car-length each.

It was nose to bumper for Cindric before making a run to the outside of Allmendinger. This battle, coupled with Noah Gragson coming out of nowhere with two to go, gave Briscoe a lengthy lead to the white flag. Racing with Allmendinger, Cindric fell back to fifth, while Briscoe captured the flag for his fifth win of the season. Haley finished second, with Gragson in third. Following them, Allmendinger finished fourth; Cindric, who showed his strength at the Brickyard after rallying back from a mid-race penalty, finished fifth; Ross Chastain, sixth; Allgaier, seventh; Alex Labbe, eighth; Annett, ninth; and Pardus, 10th.

IMS will be reconfigured to its traditional layout for the Big Machine Vodka Brickyard 400, which will be held on Sunday, July 5, at 4 p.m. ET. The race will be broadcast by NBC.

THIS WAS AS GOOD A RACE AS YOU COULD WANT. A LOT OF RUBBIN’ WITHOUT HAVING WALLS TO END YOUR DAY. THE 2 FORDS SHOWED THEY COULD HANDLE THE REST OF THE FIELD. THE NBC SCORING BAR AT THE TOP WAS EXTREMELY HARD TO FOLLOW. ON THE LAST LAP, THEY CHANGED TO THE SCORING PYLON ON THE LEFT AND YOU COULD FINALLY TELL WHERE EVERYONE WAS. NBC NEEDS TO GO TO THE PYLON FOR THE WHOLE RACE !!

Probably the best stock car race at the Brickyard in like… ever… put the cup cars on the road course!!

Watched both the Indy and Xfinity races,the Infinity races was by far the best.