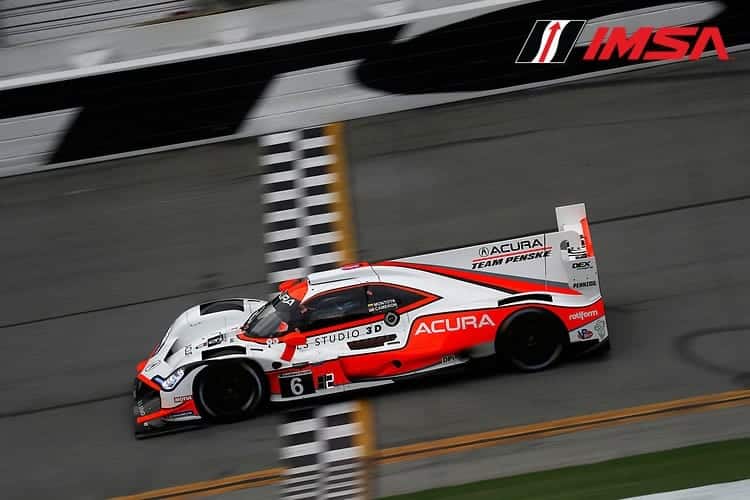 The IMSA WeatherTech SportsCar Championship is back in action after being away for more than five months.  Despite significant change since Daytona, the Mazda RT24-P is still a very fast car on Daytona International Speedway’s ROVAL.  Mazda’s Oliver Jarvis, driving the car that won the pole for the Rolex 24 at Daytona in January, was fastest overall in practice with a lap at 135.766 mph.

Teams started out the weekend with what is likely the most important practice of the weekend since it replicates the first hour of the race.  Teams were greeted by a slightly damp track, thanks to those ever-present afternoon thunderstoms that Daytona Beach is prone to this time of year.  By the time practice started, most of the track had dried out, allowing teams to practice on slick tires.

The warm weather and high humidity combined to keep speeds down slightly.  In the closing minutes of the session, Acura Team Penske’s Juan Pablo Montoya turned in the fastest lap of the day with a lap at 133.556 mph in his Acura ARX-05.  Montoya was happy to just get back out there afterwards.

“It felt great [to be back on track],” Montoya said after the session.  “It’s very hot, it’s humid.  We were lucky with all the rain through the day and thunder we were able to get the practice in the dry, IMSA did a really good job.  I’m really happy to be back in this Acura.”

Montoya’s lap was less than two-hundredths of a second faster than Action Express Racing’s Pipo Derani in the No. 31 Cadillac.  Despite the upheaval at the team due to Felipe Nasr‘s forced withdrawal from the weekend due to his positive COVID-19 test, the team has not lost anything.  Derani was fastest for the vast majority of the session, while Gabby Chaves was right up there as well, even holding a quick sector time for the majority of the session.

For Mazda, this is the first race in which Multimatic has full control over the Mazda RT24-P program.  Joest Racing was originally scheduled to bow out after Sebring in March, but the race’s postponement to November meant that the Joest pullout was retroactive to Daytona.  The team is now running under the banner of Mazda Motorsports, but still had speed to spare.  Harry Tincknell was third quickest in the No. 55.  The No. 77 did not set a time during the session due to engine woes.

Ricky Taylor was fourth fastest in the second Acura.  Chris Miller was fifth in the No. 85 JDC-Miller MotorSports Cadillac.

In GT Le Mans, it was all Laurens Vanthoor at the top of the chart.  Vanthoor set the quickest lap early in the session and continued to improve through the session.  By the end, his lap at 123.227 mph was fastest in class.  The lap was seven-hundredths of a second faster than Corvette Racing’s Tommy Milner.  Nick Tandy in the second Porsche was third fastest, followed by Antonio Garcia in the second Corvette.  BMW Team RLL’s John Edwards was fifth.

In GT Daytona, it was the sole Ferrari on the property that was fastest in class.  Scuderia Corsa’s Toni Vilander was fastest with a lap at 119.240 mph.  Vilander’s lap was two-tenths of a second faster than AVS Vasser Sullivan’s Townsend Bell, who has a very busy weekend between his driving responsibilities in Daytona and his INDYCAR TV responsibilities in Indianapolis.

Meyer Shank Racing with Curb-Agajanian’s Mario Farnbacher was third fastest in his Acura, followed by quasi-teammate Alvaro Parente in the Heinricher Racing Acura.  Wright Motorsports’ Patrick Long was fifth fastest in his Porsche.

Much like in January, the Mazdas were fast right away.  The No. 55 of Tincknell was fastest for most of the session, but Jarvis set the quickest time of all of practice with 19 minutes remaining in the session.

Jarvis’ lap was nearly a quarter of a second faster than Acura Team Penske’s Helio Castroneves.  Jonathan Bomarito in the No. 55 Mazda was third fastest, followed by Montoya and Chaves.

For Wayne Taylor Racing, practice was not so great.  30 minutes into the session, Renger van der Zande cut a tire on his Cadillac DPi-V.R. at 190 mph.  A rather scary prospect for anyone.  Luckily, van der Zande was able to bring to the car to a stop without spinning out or hitting anything.  Regardless, that brought out the only red flag of the weekend to this point.  The team was done for the rest of the session after turning in only a few laps at speed.  They ended up at the back of the Prototype class, 1.4 seconds off the pace.

The Porsches continues to show their speed in the GT Le Mans.  Earl Bamber was fastest early on in the No. 912, but teammate Tandy in the No. 911 Porsche was fastest at the end of the session with a lap at 124.439 mph.  Despite being more than a second faster than Vanthoor’s lap on Friday, that is still three-quarters of a second than the pole time in class back in January.

Tandy’s lap was six-hundredths of a second faster than Gavin in the No. 4 Chevrolet Corvette C8.R.  Jordan Taylor in the No. 3 Corvette was third, then the BMW M8 GTEs of Jesse Krohn and Bruno Spengler.

In GT Daytona, Aaron Telitz only recently got the call-up to full-time competition with AVS Vasser Sullivan after Parker Chase left the team.  It didn’t take long for him to show his pace as Telitz was fastest in class Saturday morning with a lap at 120.119 mph.  Telitz’s lap was nearly a half-second faster than Corey Fergus in Compass Racing’s McLaren 720S GT3.  Scuderia Corsa’s Cooper MacNeil was third fastest with a lap set during the opening 10 minutes of practice that was reserved for GT Daytona bronze and silver-rated drivers.  Long was fourth in his Porsche, while Matt McMurry was fifth in the No. 86 Acura.

Qualifying for the WeatherTech 240 at Daytona is scheduled to begin at 1:55 p.m.  Given NBC Sports’ busy day in Indianapolis, the session will be streamed live at IMSA.com.