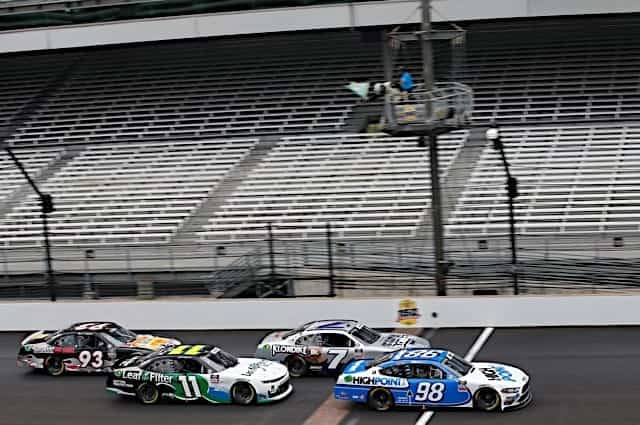 From 2012 to 2019, the NASCAR Xfinity Series has turned over 600 laps on the historic 2.5-mile Indianapolis Motor Speedway oval. But the implementation of running the infield road course for Saturday’s event brought forth a new unknown amongst the field. Fortunately for Chase Briscoe, this brought back fond memories of the Charlotte Roval event in 2018, and the skills he used to score his first career win. The knowledge learned from that day allowed Briscoe to carry the pride of Mitchell, Indiana to victory lane at his home racetrack on Independence Day, winning the Pennzoil 15o NXS race.

Saturday marked Briscoe’s seventh career Xfinity Series win, and his fifth of 2020. He led 30 of the race’s 62 laps, and won the second stage. But it was no cakewalk, as Briscoe had to deal with the hard chargers of AJ Allmendinger and Austin Cindric on the final restart. Briscoe made a mistake in the infield, allowing Allmendinger to go underneath and make the pass on him, but Briscoe took back the lead two laps later thanks to a brilliant three-wide move on Allmendinger and Cindric going into turn 1. Noah Gragson and Justin Haley also reeled in on the lead trio, but as the other four drivers scrambled for second behind him, Briscoe sailed away in his No. 98 Ford Mustang and score a popular win for his fellow Hoosiers.

Haley, another Indiana native, drove his No. 11 Chevrolet Camaro up to second, while Gragson, Allmendinger and Cindric completed the top five.

Just like the inaugural race at Charlotte Motor Speedway’s Roval in the Cup Series, the fantastic lead battle that ensued during the final run to the checkers is one that will be talked about the most from Saturday’s race. Although it’s a much different configuration than the oval, it does not change what we got to see from the Xfinity Series drivers on Saturday, especially the five leaders that duked it out for the win. Somehow, someway, road courses are tending to end up with finishes that are just as exciting as those on oval tracks. This experiment with more road courses added onto the schedule is proving to be a favorable one amongst fans. And the trend just may continue upwards in the years to come.

Although it was not an official pole win, Jeb Burton was awarded the top starting spot for Saturday’s race. Despite not being well known as a road-course racer, Burton led the first lap and hung around the top 10 for the beginning part of the race. However, a grueling fate struck Burton on lap 17, as the power steering went out on his No. 8 Chevrolet Camaro. Blistered and bruised, Burton painfully limped around the IMS road course, ending his day in 31st. Burton’s was not the type of issue expected out of a JR Motorsports car. Burton will return to the No. 8 car at Kentucky Speedway on July 9.

The misfortune that struck the Joe Gibbs Racing trio at Pocono Raceway came back to bite the team again in Indianapolis. Brandon Jones had his engine expire in spectacular style on his No. 19 Toyota Supra on lap 34, putting him out of the race in 37th. Both Riley Herbst and Harrison Burton ran in the top 10 for the majority of the race, but during the course of the final restart, both drivers suffered varying issues and had to come down pit road for unscheduled pit stops. Burton came back out to finish 25th, while Herbst went behind the wall and finished 33rd. Jones and Burton each have wins that will count towards the playoffs, while Herbst is still winless in his career. They will all have the next two races at Kentucky Speedway to look forward to and attempt to end the summer slump they have found themselves on.

Many of the top-10 finishers in Saturday’s race represented big-name teams. But one team that deserves a pat on the back is DGM Racing, who had two of their drivers collect top-10 finishes.

Alex Labbe, the 2017 NASCAR Pinty’s Series champion, was again able to use his road-course finesse and drive his No. 90 Chevrolet Camaro up to an eighth-place finish. This is Labbe’s third top-10 finish of the season, as well as his third career top-10 finish on a road course.

Preston Pardus, son of former driver Dan Pardus, was making only his third career start. But as the field lined up for the final restart with eight laps remaining, it was Pardus who led the field down to the green flag in his No. 36 Chevrolet Camaro. Pardus lost the lead to race winner Briscoe in turn 1. But at the end of the final eight-lap stint, Pardus was able to hold on and finish 10th, his first ever top-10 finish in Xfinity Series competition. Both of these results by Labbe and Pardus made this trip to the Brickyard one to remember for DGM Racing.

“It’s not the same prestige as winning on the oval, but you still won at Indianapolis Motor Speedway. It doesn’t matter if you race on the oval, the road course, the dirt track, or even in the parking lot, it’s special when you win here.“ – Chase Briscoe

Up Next: The Xfinity Series will shift their direction to the neighboring state of Kentucky to compete in a doubleheader program at Kentucky Speedway, beginning with the ALSCO 300 on Thursday, July 9. The green flag is scheduled for 8:00 p.m. ET, and the event will be televised on FOX Sports 1.