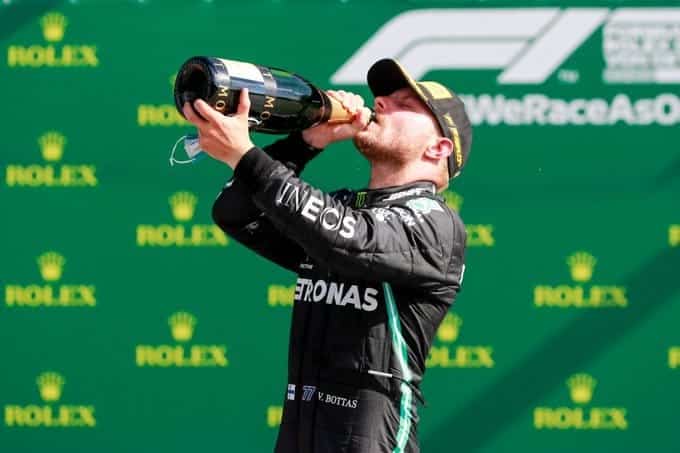 Valtteri Bottas managed to hold off his Mercedes teammate Lewis Hamilton to win the Austrian Grand Prix, the inaugural race of the Formula 1 2020 season.

With the schedule re-worked many times over because of the Coronavirus pandemic, the Austrian GP took the spotlight as the season opener and proved to be a delightful race.

Bottas prevailed at the end of a choppy but wildly entertaining second-half of the race.  Hamilton may have crossed the line in second, but the stewards moved him back five seconds. Ferrari’s Charles Leclerc pulled a magician’s act of a race and seemingly appeared out of nowhere in the final 10 laps to take the second step on the podium. Lando Norris brought his McLaren home in third position, a shocking result for the team. Hamilton wound up fourth, with the second McLaren of Carlos Sainz in fifth.

Sergio Perez looked to be on his way to a third-place finish, but was bitten by both a fading car and a five-second penalty for an unsafe pit lane release that relegated him to sixth.

Pierre Gasly, driving for the newly-minted AlphaTauri team, formerly Toro Rosso, came across the line in seventh, with Esteban Ocon, returning to the track after being away for a year, bringing his Renault home eighth.

Antonio Giovinazzi claimed the ninth spot in his Alfa Romeo, while Sebastian Vettel played the role of his own worst enemy and could muster no better than 10th.

Bottas started on the pole and sped out to an early advantage, at one point staking seven-second lead over Max Verstappen, who started second.

Hamilton had been relegated to a fifth-place starting position after the stewards reconsidered their actions regarding his failure to slow down during qualifying when yellow-flags were displayed. Despite the handicap, Hamilton moved steadily past those in front of him and soon sat behind Verstappen.

In a battle of wits that never came to be, Verstappen started on hard tires compared to the two Mercedes around him and was set for a contrarian strategy. Having won the previous two Austrian GP, Verstappen could have challenged the Mercedes team in a way that none other could. The threat to the lead never materialized, as Verstappen found himself parked in the garage by lap 12.

From there, the race settled into one of management, with Bottas holding on to a five-second lead over Hamilton and a shuffling order behind them as a myriad of problems befell a number of drivers.

Kevin Magnussen’s brakes failed on lap 26, changing the complexion of the race as it brought out the first safety car. Mercedes double-stacked their pit stops and their drivers emerged one-two with Bottas maintaining the lead. Bottas managed a clean getaway on lap 31 and held a small lead over Hamilton as Alexander Albon fell off the Mercedes pace.

Both Mercedes drivers were ordered to stay off the curbs as they faced potential critical gearbox issues, and the directive seemed to rein in both drivers to a degree. The gap to the field became close once again when another safety car period came about on lap 51 for George Russell’s retirement; Russell pulled his car off the tarmac but was still a danger to drivers.

From there, Bottas held on through the lap 55 restart, bulleting out in front only to be shut down by another safety car for Kimi Raikkonen’s right-front wheel dislodging itself from his Alfa Romeo.

Unlike the other mechanical failures that dotted the race, Raikkonen’s issue came just after a pit stop and was tied to his team’s error in attaching the wheel, with the team incurring a post-race fine for their indiscretion.

On lap 61, Bottas blasted out again and never needed to look back. Behind him, Hamilton and Albon engaged in their own battle that brought souring results for both.

Albon had a podium in his grasp and sought the second step as he battled Hamilton. With fresh soft tires, Albon had the better situation. Hamilton kept Albon wide through the turns though, and as Albon began to move past, Hamilton edged further out, causing contact and spinning Albon into the gravel.

Albon dropped to 13th while Hamilton earned a five-second penalty for the contact – dropping Hamilton from the podium.

Behind them, on lap 69, Norris passed Perez for fourth, pushing Norris into an advantageous position in the timing. Perez found himself holding on to fourth while falling into the challenge of Sainz.

To close the race, Daniil Kvyat’s rear-right tire exploded on lap 70, but the track remained clear, and Kvyat joined the likes of nearly half the field that was also failing to finish. He followed Albon, who had retired just a half lap earlier.

Bottas cleared the line a lap after and enjoyed a satisfying win to open the season.

By lap 30, four cars had dropped from the race.  As the Sky Sports crew noted, last year, all 20 of the cars finished, a feat that had occurred only nine previous times in F1.  The discrepancy between the two races is startling and frustrating as the mechanical problems removed opportunities for what should have been solid battles. A quick rundown:

By lap 51, two more joined in the disappointment, as Romain Grosjean and Russell, from Haas F1 and Williams, respectively, faced mechanical issues. For Grosjean, the brakes quit just like his teammate Magnussen, and for Russell, the problem seemed to be in the transmission.

Under the current pandemic circumstances, testing proved to be nothing more than a hope, but this race appears to be Exhibit A that everyone needed some time on the track before this weekend. The counter to such criticism is that everyone worked under the same rules and therefore all were playing on the same track. By the end of the race, nine of the 20 cars found themselves parked in the garage before the checkered flag.

The one team that deserves all the scrutiny in the world at this point is Haas F1. To be succinct, they are a mess. If anyone has any idea what they are doing or how they are once again managing brake concerns that should have been fixed in the offseason, they should contact Gunther Steiner, the team principal. At this juncture, with the funding the team enjoys, the results are pathetic.

The F1 season continues with a ‘same Bat-time, same Bat-channel’ rendering next weekend. The teams will again race the Red Bull Ring in Austria on July 12, 2020.

Once again we see the depth of talent at Mercedes. However it was still an enjoyable eace. One where there were surprises, both of achievements as well as failure.
Abd it’s always refreshing to see that tye sanctioning body is willing to enforce the rules. Well most of the time anyway.