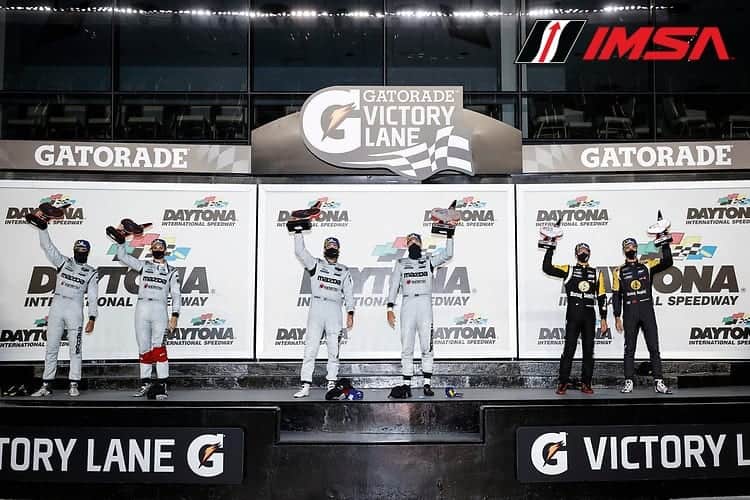 The former Mazda Team Joest entered Daytona with an all-new organization as Multimatic has replaced Joest Racing as the operator of Mazda’s RT24-Ps.  The changes didn’t change any of the pace shown in January as Jonathan Bomarito and Harry Tincknell claimed overall victory in the WeatherTech 240 at Daytona Saturday (July 5).

“To be honest, from the first practice yesterday as soon as we jumped in the car, after four or five laps, we saw [that] we had the pace,” Tincknell said after the race.  “This is the first time running this race with Multimatic working out of Mooresville, N.C.  They’ve been running with a skeleton crew for the last two or three months, setting up the workshop, new trucks, new [pit] stand and setting everything up.  So to come out here and get a [one-two finish], it’s a fantastic job.”

Central Florida is a muggy place in July and thunderstorms are a common occurrence.  One such storm pushed through Daytona Beach, complete with lightning.  This resulted in a complete stop down that delayed the start for nearly 45 minutes.

Teams in all three classes were forced to make a decision on whether to start on wet tires or on slicks.  The conditions were similar to the first practice session prior to the Rolex 24 in January where the track was drying much more quickly on the tri-oval than in the infield.  Most everyone in the Prototype class, including pole sitter Helio Castroneves, started on rain tires.

The precipitation stopping, temperatures increasing and 26 cars on the track meant that the track began to dry quickly.  Just 13 minutes into the race, Castroneves stopped to switch to slicks.  The team would never return to the lead as the Mazdas were simply faster than the Acura ARX-05 all day.  Castroneves and teammate Ricky Taylor would end up retiring from the race with engine problems near the halfway point.

Much of the race was ultimately based on pit strategy.  Starting on wet tires ultimately added a pit stop for nearly everyone.  The exceptions were the Cadillacs of Action Express Racing and Wayne Taylor Racing, who gambled on slicks.  For Gabby Chaves in the No. 31 Whelen Cadillac, the move worked out fine as he led laps and was able to maintain a regular pit schedule.  The move wasn’t so great for WTR.

Acura Team Penske’s Juan Pablo Montoya was the first to stop for slicks, so he assumed the lead shortly after the first round of stops ended.  However, Montoya didn’t have the pace to hold off the Mazdas.  Bomarito was able to run Montoya down and take the overall lead before Montoya could make his second stop.

Chaves’ teammate Pipo Derani moved up into he lead after the second round of stops for the Mazdas.  Running the long game, Derani was able to hold onto the advantage despite the Mazdas breathing down his neck the whole way.

Once Derani made his second stop, it was all Mazda from that point on.  During the second round of stops, the No. 55 of Bomarito and Tincknell was able to jump the No. 77 of Oliver Jarvis and Tristan Nunez.  From that point on, the No. 55 only gave up the lead for pit stops en route to overall victory.

The margin of victory was 10.168 seconds over Jarvis and Nunez.  JDC-Miller MotorSports’ Joao Barbosa and Sebastien Bourdais came on strong in the second half of the caution-free race to finish third.  Montoya and Dane Cameron were fourth in their Acura, while Chaves and Derani were fifth.

GT Le Mans saw everyone except Nick Tandy start on slick tires.  That meant that Tandy quickly rose from last in class to first on the first lap.  He then drove away from the rest of the contenders.  Four laps into the race, Tandy already had a 17-second lead.  A lap later, Tandy had to pit for slicks, dropping him right to the back.

Tandy’s pit stop put BMW Team RLL’s Jesse Krohn into the class lead with Bruno Spengler right behind.  The BMW teammates battled for a couple of laps until Spengler was able to get past.  Once out front, Spengler maintained the advantage to his first pit stop 49 minutes into the race.

The BMW M8 GTEs ran one-two into the second half of the race, but it was here where pit strategy came back into play.  The BMWs seemed to have the speed, but they were on a three-stop strategy.  Meanwhile, Corvette Racing’s No. 3 of Jordan Taylor and Antonio Garcia made their final pit stop on Lap 60 with 71 minutes to go.  From there, it would take a decent amount of fuel conservation to go the distance.

Ultimately, it became clear in the final hour that the two-stop strategy was the way to go.  Connor De Phillippi ran an extra 10 laps before stopping from the class lead with 54 minutes to go.  Being good on fuel is great, but that put the No. 25 32 seconds back in fifth.  The three chassis racing in GT Le Mans are evenly matched, so it was very difficult to make up ground.

Garcia took the class lead when De Phillippi stopped and made his fuel load last to the finish to take the victory.  It is the 100th victory for Corvette Racing and their first since 2018.  It is also the maiden victory for the new Chevrolet Corvette C8.R.

Garcia and Jordan Taylor’s margin of victory was 1.977 seconds over the No. 912 Porsche of Earl Bamber and Laurens Vanthoor, who were on a similar strategy.  The No. 911 Porsche with Tandy and Frederic Makowiecki were third, best of those that had three stops.  Spengler and De Phillippi ended up fourth, while the No. 4 Corvette of Oliver Gavin and Tommy Milner were a lap down in fifth.

In GT Daytona, Compass Racing’s Corey Fergus won the class pole, but missed the cutoff for reconnaissance laps prior to the race.  As a result, the team had to start from the pit lane and serve a drive-through penalty at the end of the first lap.  That move effectively gave the lead to AVS Vasser Sullivan’s Aaron Telitz.

Given that GT Daytona cars have anti-lock brakes and traction control, the popular move was to start on slicks.  The exception to that rule was GRT Magnus’ John Potter, who took the gamble to start on rain tires.  For the first few few laps, Potter was dynamite, quickly moving up the order and taking the class lead.  Unfortunately, once the track dried out enough, Potter had to stop.  That dropped the GRT Magnus Lamborghini way back, out of any real contention.

Saturday night’s race in GT Daytona ended up being dominated by AVS Vasser Sullivan.  The No. 14 of Telitz and Jack Hawksworth was never seriously challenged all evening.  They led all but five laps in the race.  The laps they didn’t lead were in and around pit stops.

Telitz was able to open up a good lead early on in the race before handing off to Hawksworth.  Hawksworth is already known as one of, if not the fastest drivers in GT Daytona.  Spotting the fastest man in the class a 10-second lead is not necessarily good for the rest of the field.

The second AVS Vasser Sullivan Lexus was nearly as good.  Frankie Montecalvo was quick early on and moved up to second in the first 20 minutes of the race.  Townsend Bell, who had called the NTT IndyCar Series GMR Grand Prix for NBC earlier in the day and had quite the adventure getting back to Florida, was just as quick in the second half of the race.

Third with Meyer Shank Racing with Curb-Agajanian’s Mario Farnbacher and Matt McMurry in their Acura.  Fourth went to the Heinricher Racing Acura of Alvaro Parente and Misha Goikhberg.  Scuderia Corsa’s Cooper MacNeil and Toni Vilander rounded out the top five in their Ferrari.

Teams will take next weekend off before returning to action at Sebring International Raceway for the Cadillac Grand Prix of Sebring on July 18.  The race will air live on NBCSN starting at 5:30 p.m. ET.