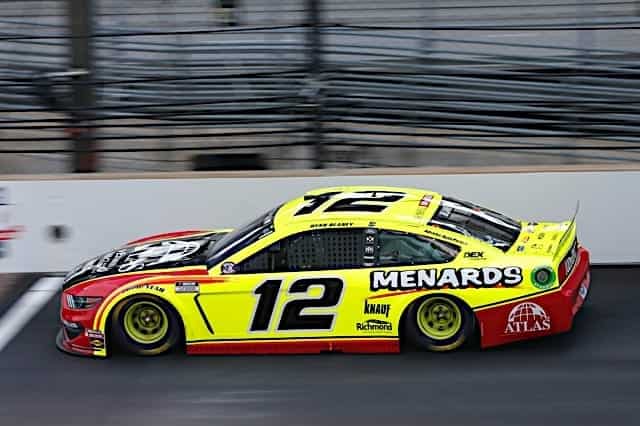 “Zach Price, rear tire changer for the No. 12 Menards/Atlas Ford Mustang, was treated and released from Methodist Hospital. He will travel back to North Carolina with the team for further evaluation.”#NASCAR

As the field came down the IMS pit road, among the narrowest in the NASCAR Cup Series, multiple cars became stacked up near entry following the competition caution on lap 12. Multiple cars collided, and Zach Price, a rear tire changer for Ryan Blaney, was pinched between Blaney’s car and that of Brennan Poole, who careened into the No. 12 in the midst of the melee among multiple cars.

The red flag is out in the #Brickyard400 after a serious incident on pit road.

Price was able to limp away from the car to the immediate attention of the AMR safety team. He gave a thumbs-up while being loaded onto an ambulance via stretcher.

A member of the No. 12 pit crew is receiving attention from the AMR Safety Team at @IMS after the multi-car incident on pit road. pic.twitter.com/WpX9RZzyQd

Scary accident… brought to mind Mike Rich, crew member for Bill Elliott who was killed in a similar looking accident in 1990. So glad that it appears Price will be okay.

Maybe NASCAR should consider lowering the pit road speed limit to 40 mph. Also Brendan Poole should be censured for choosing to run over a tire changer than plow into the car ahead of him.

I feel bad for the tire man but he obviously didn’t have his helmet on properly or it wouldn’t have fallen off. The accident could have been much worse if he had a head injury.