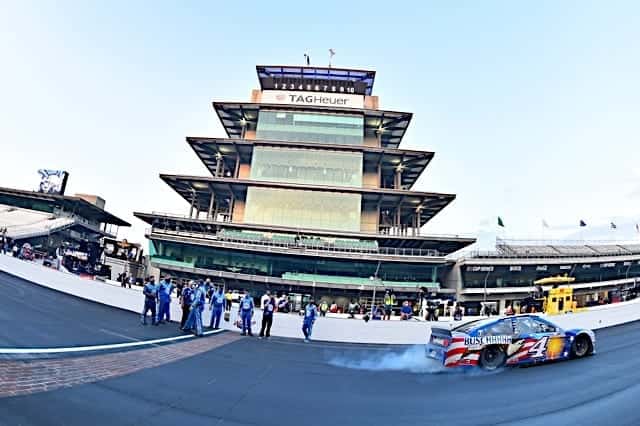 After running near the front for most of the Big Machine Hand Sanitizer 400, Kevin Harvick needed a good restart to seal the victory during an overtime restart.

The veteran driver got that and more to win the crown jewel event for the third time overall and second year in a row.

Harvick pulled away from Matt Kenseth to score the win by .750 seconds unofficially ahead of Aric Almirola, Brad Keselowski and Cole Custer to complete the top five. They were followed by Kyle Busch, Michael McDowell, Tyler Reddick, Bubba Wallace and Joey Logano to round out the top-10 finishers.

“This is the Brickyard. This is what I grew up wanting to do as a kid, to win at the Brickyard,” Harvick said. “To be able to come here and have won for the third time is something I could have never have dreamed of.”

Kenseth, who replaced Kyle Larson following the return of the series following the initial outbreak of COVID-19, got his best finish since the November of 2017 when he won at Phoenix, his final season before initially retiring from driving full-time.

Scoring his best finish since his last victory (Phoenix, 2017) is @mattkenseth, today's runner-up.

"I feel a lot more comfortable than I have been, for sure."

He'd finished outside of the top 15 in seven of his 12 races since taking over @CGRTeams' No. 42. pic.twitter.com/4jz4v02SMa

The race was all but sewn up as a victory for Denny Hamlin, who along with Harvick was the class of the field on Sunday. But Hamlin joined the list of drivers riddled by tire problems on Sunday when he cut down a right-front tire with seven laps to go, licking the outside wall hard.

“We didn’t do what we needed to do. It just didn’t work out for us [Sunday]. We had a fast car and were stretching it out there, but I wasn’t pushing the right front at all,” Hamlin said. “It’s kind of roulette. You don’t know if one is going to stay together or not, and mine didn’t.”

That elusive #Brickyard400 victory will have to wait at least another year for @dennyhamlin.

He talks about his day and his late-race wreck at @IMS. pic.twitter.com/clxr9L82vl

That moved Harvick to the front, and from there he held his advantage for the win.

Green-flag passes for the lead were at a premium, so much so that Harvick went so far as to go for a three-wide pass at one point to take the lead.

“I didn’t have any more room, that’s for sure,” Harvick said.

A total of nine drivers were scored as race leaders, Harvick leading the most laps with 68.

A scary pit-road incident marred the early part of the race. With the field coming onto pit road following the competition caution on lap 12, multiple cars collided near the entry of pit road, resulting in the car of Brennan Poole colliding with Ryan Blaney’s while it was being serviced. Blaney’s rear-tire changer, Zach Price, was pinched between the two cars and was taken to a local hospital for further evaluation where he was eventually treated and released.

Brave people that climb over the wall on pit road.

Happy to see the @Blaney pit crew member smiling with a thumbs up after a crash in the early goings of the #Brickyard400 on @NBC. pic.twitter.com/CCAak9kCCO