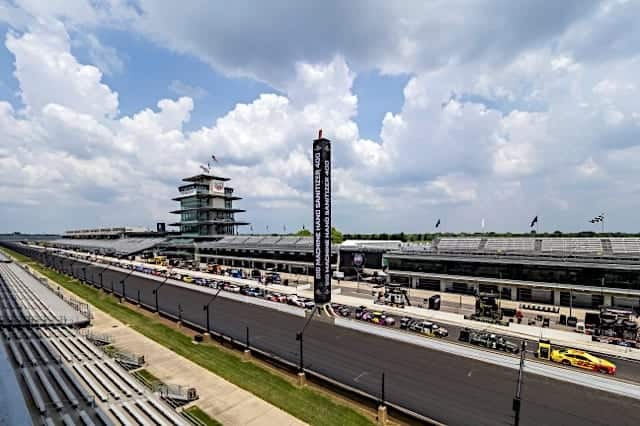 This past weekend, 2020 motorsports around the world slowly moved toward some type of normalcy. NASCAR’s contribution was its first companion event with the NTT IndyCar Series at the famed Indianapolis Motor Speedway.  INDYCAR and the NASCAR Xfinity Series used its infield road course for Independence Day events, a first-time Indy doubleheader. Then, the Cup Series ran its customary 400-mile race on the oval on Sunday, July 5.

Just like many of the other scheduling experiments NASCAR has conducted this year, the Saturday doubleheader felt like a success and an idea that merits further exploration.  If nothing else, it was a nice change of pace for two of America’s major auto racing leagues to cooperate instead of simply coexist.

Long before COVID-19 made social distancing the order of the day, NASCAR and INDYCAR were determined to be socially distant from each other.  The leadership of both sanctioning bodies has traditionally been averse to holding companion events.  Not only would such a collaboration mean working with the competition, there would be a pecking order; somebody’s race would have to be the undercard.  For many years, there was too much pride on both sides to share a race weekend.

An arrangement at Indianapolis finally offered a reasonable compromise.  NASCAR got the Sunday slot, but the races would be held at IndyCar’s house.  What’s more, the Xfinity race immediately following the IndyCar event may have been the most highly anticipated of the three.  Ever since leaving the much-beloved Lucas Oil Raceway and coming to the “big track” at Indianapolis in 2012, NXS events at the Brickyard have not generated as much excitement among fans as NASCAR had hoped.  Racing on Indy’s road course gave the sanctioning body another chance to test the ROVAL concept that has worked so well at Charlotte Motor Speedway.

Suffice it to say that Indy passed the test.  While much of the race was fairly orderly, the closing laps featured a spirited battle for the win between Chase Briscoe and Austin Cindric.  And A.J. Allmendinger.  And Noah Gragson. And Justin Haley.  The Indiana-born Briscoe prevailed and celebrated by climbing the frontstretch catchfence, continuing the tradition of his boss and racing hero, Tony Stewart.

Sunday’s race was not bad, either.  The 2020 Brickyard 400 featured quite a bit of attrition and unpredictability.  It also had some interesting strategy and a tense battle for the win between between Kevin Harvick, Denny Hamlin and Matt Kenseth.  But even with NASCAR’s latest aero package for the Cup Series, passing was difficult and clean air was king on the oval itself.

The aero sensitivity of Indianapolis Motor Speedway is nothing new.  NASCAR has been searching for ways to improve the quality of racing there and promote the track for over a decade since the great tire debacle of 2008.

The most recent fix had been to move the yearly stop at Indy to the last race of the regular season.  But that plan lasted only two years before NASCAR shifted the Brickyard 400 date to Independence Day weekend. It disrupted tradition; the date had been Daytona International Speedway’s slot since the track opened for business in 1959. Daytona, in return, got the last race of the regular season as a consolation prize.

Seeing Daytona lose its Independence Day weekend race was a tough pill to swallow.  In and of itself, the loss of a 60-year tradition was bad enough. But the sport’s rationale for making the scheduling change made it worse.  NASCAR effectively discarded history to prop up an open-wheel track that has not hosted compelling racing for stock cars.  It’s the same situation Darlington Raceway found itself in after losing the customary Labor Day weekend date for its Southern 500.

Yet the enthusiasm for racing in southern California on Labor Day weekend never caught on.  Darlington still had the history and the prestige, not to mention more compelling competition.

The Auto Club Speedway/Labor Day pairing lasted only five years before NASCAR made another scheduling change, shifting one of Atlanta Motor Speedway’s races to Labor Day weekend.  In 2015, Darlington finally got its traditional race date back after a dozen years of disarray.  It appeared NASCAR learned about messing with tradition, though it had to learn the hard way.

The story of Darlington and the Southern 500 shows that it’s a combination of history and the physical track that makes a race weekend special, not the date itself.  Just like the Southern 500 made Labor Day special for NASCAR, Daytona made Independence Day weekend special.  Indy is obviously special in its own right, but the history and prestige of the track has nothing to do with Independence Day and very little to do with stock cars.  The only way fans will get excited about the Brickyard 400 at this point is if NASCAR finds an aero package that works for the track, or if the Gen-7 car provides some answers.  Otherwise, history suggests a good stock car race at Indy will always be the exception rather than the norm.

As NASCAR continues to finalize the schedules for its major divisions in 2021, the sanctioning body must consider the types of changes it’s willing to make.  Saturday’s Xfinity race and the collaboration with IndyCar showed that sometimes, breaking with tradition and trying something new pays off.  But breaking with tradition always comes at a price.  Leaving Daytona for Indy on Independence Day weekend carries more serious consequences for how fans will respond to the race.

In time, NASCAR realized that Darlington’s tradition was too valuable to lose.  We’ll see if the sanctioning body comes to the same conclusions about Daytona and Independence Day.