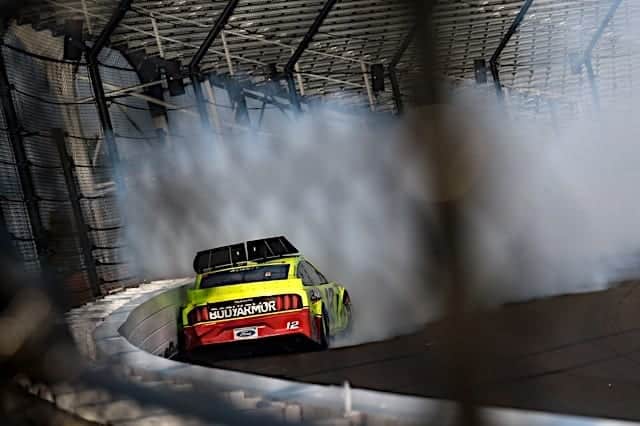 The durability of Goodyear tires provided to NASCAR Cup Series teams during the 2020 Brickyard 400 played a significant role in the outcome. Multiple drivers saw their race Sunday (July 5) end early due to blown tires.

In fact, two drivers, William Byron and Denny Hamlin, suffered blown tires while leading. Hamlin’s came with seven laps to go in the race, leading to a hard wreck that ended his day.

Greg Stucker, Director of Race Tire Sales for Goodyear, came to the company’s defense after the event. Stucker noted following Sunday’s race teams were cautioned about what air pressure amounts should be used. Goodyear’s representative also pointed out the variable that lack of practice time may have played for race setups.

“With the high amount of downforce on the Cup cars down the straightaways,” Stucker claimed, “We asked teams to respect our recommended pressures so as not to hurt the tire… We had our engineers on the ground all race, working with teams as we do every week, trying to emphasize the importance of right-front pressures.”

Stucker went on to blame cooler temperatures late in the day for an increase in speed that translated into extra load on the tire. However, the failures were arguably the worst for Goodyear since their 2008 debacle at the speedway. In that Brickyard 400, the tire compound would last no longer than 10-12 laps before coming apart. Drivers in that event said they expected tires to fail and could not race their cars at 100 percent; attendance for the stock car race at Indy has dwindled ever since.

Not every racer was convinced by Goodyear’s 2020 explanation. At least one driver from outside of NASCAR watching Sunday’s race expressed thanks to the fact that their racing series uses a different tire.

What a bummer for @dennyhamlin. All his race. I watch this and it just makes me so thankful to have @FirestoneRacing tires. Never have I personally entered a corner and worried about a tire blowing. Thank the lord! ??

Other drivers who experienced tire failures in Sunday’s Brickyard 400 included Erik Jones, Ryan Newman and Alex Bowman. Kevin Harvick went on to win the event, his second straight at Indianapolis.

The 20 and the 11 are Revevend Gibbs cars. Maybe Truex was lucky not to go out early. It wasn’t the tires. It was the setup on the cars. Just like it usually is.

Maybe Tony Stewart was right when he said that Hoosier can make better tires since teams
running tires from said company have very few failures.