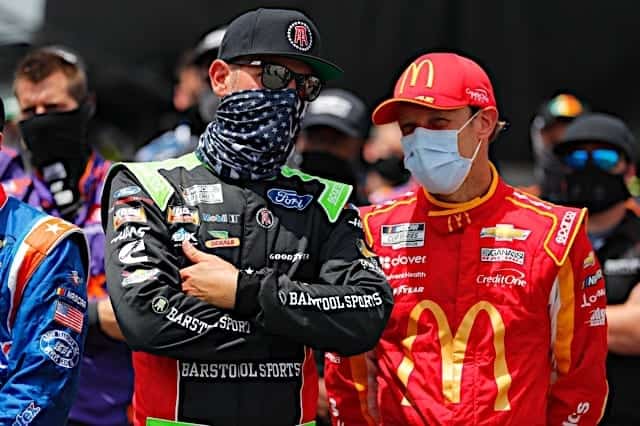 Welcome back to the top five, Matt Kenseth. You have to go back 966 days since he last appeared there, winning at Phoenix Raceway in 2017. It was the penultimate event for Kenseth with Joe Gibbs Racing and his last full-time season in the sport. After a part-time ride in 2018 with Roush Fenway Racing, he sat out the 2019 season altogether and was all but retired until Kyle Larson’s firing opened up a spot at the No. 42 for Chip Ganassi Racing.

Now, after seven weeks of shaking off the rust, the 48-year-old Kenseth and CGR have finally found a setup that works. After two top-12 finishes at Pocono, Kenseth finally hit his stride at Indianapolis as he scored a runner-up finish in the 2020 Brickyard 400.

“It felt good to run up front and was a confidence booster for all of us,” Kenseth said afterward. “Looking forward to getting to Kentucky and carrying that momentum forward.”

The No. 42 team might be back to contending in the top 10 weekly, after all. And if Kenseth can grab a victory, don’t forget, that win earns him a spot in the NASCAR Cup playoffs.

Honorable Mention: Cole Custer scored his first top-five result of the season (his previous best was ninth at Phoenix Raceway in March.) And how about Michael McDowell? He scored his second top 10 in two weeks with a seventh-place result. That’s his best career Cup performance outside of the two superspeedways at Daytona and Talladega.

North Wilkesboro Speedway has a rich history, one of the sport’s original short tracks that held NASCAR Cup Series races from 1949-1996. The oval has since fallen into disrepair, closed in 2011 and no longer functional for any type of racing.

But the impact this track had on the sport? It’s never forgotten.

In a segment with Rutledge Wood on NBC, he explained how Indianapolis recently installed a lift in victory lane. Well, the lift was a nod to North Wilkesboro, the track which perfected the first victory lane lift.

The improvement is one of many that Roger Penske has made to Indianapolis Motor Speedway since taking over control of the track in 2019. And adding a NASCAR twist at an open-wheel mecca? All the more impressive as stock car racing weaves its way into the 2.5-mile oval’s long and distinguished resume.

Pole sitter Joey Logano led the Brickyard 400 field to green and led 14 laps. But after losing the lead early, he was never a factor up front. A mediocre day was made more challenging shortly after Logano pitted for the last time under green on lap 131. Two laps later, Alex Bowman blew a tire, bringing out the caution and trapping the No. 22 Ford a lap down. Logano took the wave-around and recovered to 10th. It was a decent result considering how off the Shell/Pennzoil Ford was most of the day.

NASCAR Cup Series point leader Kevin Harvick had an interesting strategy to get up front. Before the competition caution, Harvick pitted for tires. The NASCAR rulebook states that you cannot add fuel into a car before that yellow, meaning the No. 4 would be short on fuel to make it to the end of the stage.

However, a caution for Ryan Newman’s blown tire allowed Harvick to pit with other cars. He worked his way up to fifth by the end of stage one, an early sign of his Ford’s superior speed.

The 2019 Brickyard 400 winner then worked his way to the front in stage two, winning with ease. The final stage saw him battle with Denny Hamlin, a back-and-forth of the two best drivers so far this season. With the duo running neck-and-neck, the win would come down to which driver made a mistake in the closing laps.

Initially, it seemed Harvick was the one who made it. Hamlin pitted first for his final green-flag stop. Harvick was supposed to pit as well but didn’t hear the crew. One lap later, when the No. 4 car actually pit, the crew had problems on the stop with the left front tire. Harvick came out behind Hamlin and could not get around him until the No. 11 Toyota blew a tire. But after Hamlin was wrecked, Harvick took control with ease. He coasted ahead on the final restart to earn his fourth win of the season.

Pocono winner Hamlin looked like a sure favorite to win the Brickyard, utilizing momentum from his win on Sunday. As the laps wound down, it looked like this year’s Daytona 500 winner was adding the one crown jewel race missing on his resume. But with seven laps to go, Hamlin’s right front tire blew going into turn one. He ended up finishing 28th.

2019 Cup champion Kyle Busch’s career is one filled with highs and lows. During a “high” season? Busch wins a lot of races across all three series and is a title contender.  A “low” year is when Busch goes winless for long stretches as critics, bad luck and frustration mounts.

2020 seems like a “low” for Busch. Some races, like Martinsville Speedway and Homestead-Miami Speedway, have had alarm bells going off in the No. 18 camp due to poor performance. However, Busch hasn’t been completely terrible; he’s finished in the top six nine times this season and won in NASCAR’s lower divisions.

At Indy, Busch did have a flat tire after pitting for the eighth caution of the day. He also failed to lead a single lap. But Busch found himself running inside the top 10 for the majority of the race while his other Joe Gibbs Racing teammates failed to finish. The two-time Brickyard 400 winner gained stage points, then ended up in sixth position. Busch has battled adversity while trying to defend his 2019 title, so persevering through races like Indy go a long way.

Goodyear seemed to have many moments where they held their breath… far more than they would have liked. Five drivers experienced major tire problems as the tire company appeared to bring their worst compound to Indy since the infamous 2008 Brickyard 400. Ryan Newman was the first victim on lap 41. William Byron then had a tire go down after the restart but managed to not tear up the car that much. He salvaged a 27th-place finish, five laps off the pace.

Erik Jones and Alex Bowman then both had hard hits as their tires blew in the middle of the corner. Hamlin was the last victim of a flat tire as it blew with seven laps to go while cruising to victory.

Goodyear’s Greg Stucker made an impassioned defense of the tire after the race, blaming the issue on a lack of practice time, among other factors. No matter the reasons, this much is clear; the tire compound needs to be improved before the 2021 running of the Brickyard.

Why… did NASCAR start this race so late?

For the eighth time in 12 Cup races since NASCAR’s return from COVID-19 quarantine, the sport suffered through a weather-related delay. This time, lightning in the area caused a 50-minute delay; drivers started their engines at 5:14 ET.

That’s right. A track without lights began its race at 5:14 and had a scheduled start time of 4:24. Why in the world would NBC choose such a late start time at Indianapolis Motor Speedway? With no fans in attendance and no other conflicting events, it was clearly a made-for-television choice. It appeared NBC’s return to NASCAR coverage, anchored by Mike Tirico, made the network feel they needed to treat the Brickyard 400 like a 4:25 Sunday afternoon NFL primetime game.

There’s only one issue with that comparison: the NFL will never be affected by weather. The late start times throw NASCAR into the heat of the day and Mother Nature has made them pay the price. How many more thunderstorms will it take before executives come to their senses and put 1 p.m. ET start times back on the schedule?

After avoiding any positive tests for COVID-19 upon its return in mid-May, NASCAR has seen their lucky streak begin to run out in tandem with the national spread of the virus.  At Indianapolis, seven-time Cup Series champion Jimmie Johnson tested positive for COVID-19. Justin Allgaier took over the No. 48 Chevrolet, crashing out on pit road and finishing 37th in the first race without Johnson in Cup since November 2001.

Where will NASCAR go from here if more drivers test positive? It’s the same question plaguing stick-and-ball sports like Major League Baseball and the NBA, each of whom had a high percentage of players test positive as they prep to return. Trepidation and anxiety have risen in both sports as it’s increasingly questionable whether they’ll be able to restart.

Many more cases in NASCAR’s driving corps might cause them to shut down the season again. There remain more questions than answers in Johnson’s case although thankfully, he’s asymptomatic.

NASCAR President Steve Phelps seemed to make clear in a Saturday appearance in the NBC broadcast booth COVID-19 protocols will not change. Will public pressure force him to mandate at-track testing for COVID-19 going forward? And will an official list be released as to who was in contact with Johnson the past few days?

The next couple of weeks will dictate the future of NASCAR’s 2020 season. Johnson could be an isolated case… or he could be the tip of an iceberg.