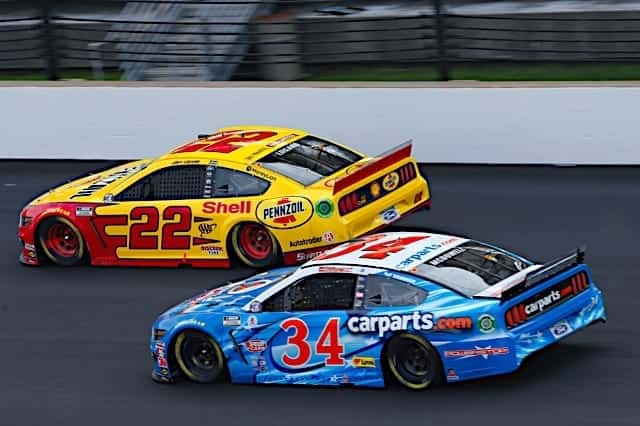 Front Row Motorsports has taken some major steps toward becoming a more competitive team, and this season is showcasing the results of that effort.

Michael McDowell rebounded from a last-place finish at Pocono Raceway to earn seventh at Indianapolis Motor Speedway on Sunday (July 5). It was his second top 10 in the past three races, quite a feat for the No. 34 Ford Mustang driver.

Early on in Big Machine Hand Sanitizer 400, McDowell avoided the pit-road calamity that took several drivers out of contention. Then as the day went on, one frontrunner after another suffered blown tires, which ended their day. McDowell worked his way into the top 15 and was just outside the top 10 when leader Denny Hamlin faced a similar fate as his peers with seven laps remaining. This allowed McDowell to take the 10th spot coming to a green-white-checkered finish. Then on the last lap, McDowell again took evasive maneuvers as Matt DiBenedetto and Austin Dillon wrecked in turns 3 and 4.

After the race, McDowell shared his thoughts about the strong result.

“Another great finish for us. Another solid top 10. It’s such a big run for us. I’m so proud of everybody at Front Row [Motorsports] and [owner] Bob Jenkins for giving me this opportunity. It’s taken so long to be this competitive, and I’m so thankful to have the opportunity. To have CarParts.com and Power Stop and Love’s Travel Stops and FR8 Auctions and all our partners throughout the year, Speedco — so many great people that make this possible, and we’re doing it. We’re doing it every week. We’re definitely way more competitive than we’ve ever been, and it’s a lot of fun.”

Sunday was a good day for underdogs, including Bubba Wallace, who scored his second straight top 10 at the Brickyard. Other longshots who had good days were Germain Racing’s Ty Dillon in 14th, McDowell’s FRM teammate John Hunter Nemechek in 15th, Spire Motorsports’ Ross Chastain in 17th and Daniel Suarez in 20th.

On Saturday, the Xfinity Series competed on the IMS infield road course, and several ‘dogs showed their strength in the Pennzoil 150. DGM Racing’s Alex Labbe and Preston Pardus took home the eighth and 10th positions. Additionally, Brandon Brown gained 13 positions to finish 11th, Brandon Gdovic scored his and Sam Hunt Racing’s best result in 12th, and Jeremy Clements was 13th. Jade Buford nabbed a 14th in his first NXS start for SS Green Light Racing, while Kyle Weatherman repeated his performance from Pocono with another 15th.

More longshots filled out most of the top 20, starting with RSS Racing’s Myatt Snider and Ryan Sieg in 16 and 17. Jesse Little ended in 18th, and Timmy Hill claimed the 19th spot for MBM Motorsports.

NASCAR heads to Kentucky Speedway for a full weekend of racing. Underdogs haven’t generally fared well there, but the way FRM has been performing this year, I wouldn’t doubt if McDowell or Nemechek gets another top 15.

The Xfinity Series has two races at the 1.5-mile track on Thursday and Friday nights. Sieg finished ninth there last year and could definitely use another good points day. Also, keep an eye out on Brown; he’s done well this season when there’s been no mechanical issues.

Finally, the Gander RV & Outdoors Truck Series runs Saturday at 6 p.m. ET. Tyler Hill had a strong result in last year’s event in which he ended 11th, and could have a similar performance this week.

Solid day for our team and I learned a ton running my first laps @IMS! Thanks again to @ManenTail for being back on board! Look forward to coming back next year! #z00m #RealHorsePower #Starcomracing https://t.co/6LfLnvgCBX