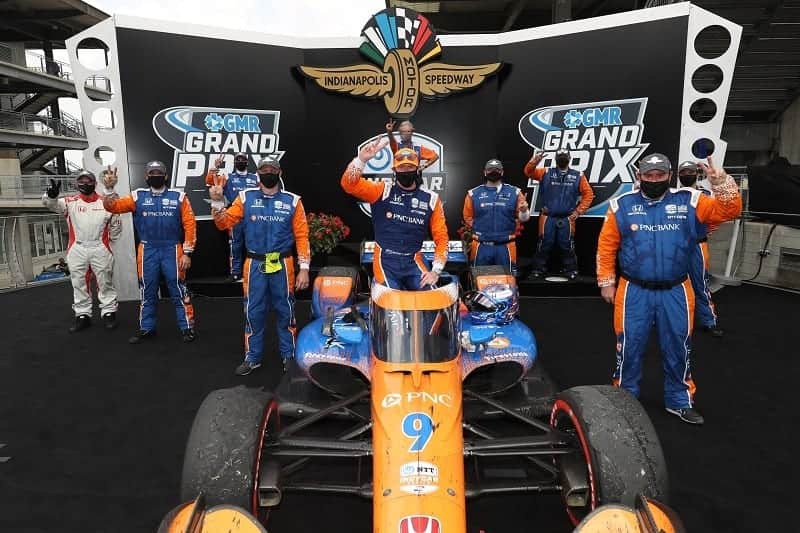 Scott Dixon and the No. 9 crew celebrate after winning the 2020 GMR Grand Prix. (Photo Credit: Chris Owens/Courtesy of IndyCar.)

Scott Dixon steamrolled the NTT IndyCar Series field at the 2020 GMR Grand Prix, but how exactly did he win by 20 whole seconds? What are his thoughts about the additional IndyCar records he achieved by winning the July 4 race? And what about the significant personnel changes made on the No. 9 PNC Bank Chip Ganassi Racing Honda team, that seem to have paid off in spades?

After his impressive win, Dixon spoke to Frontstretch about his record-breaking win and how the No. 9 team has continued to develop in the 2020 IndyCar season. If you didn’t see the latest IndyCar race, you can catch up with our 2020 GMR Grand Prix recap and watch race highlights here.

Brittany Frederick, Frontstretch: Scott, you not only won your second consecutive race this season, but this was your first victory at the Brickyard since 2008. And you’re now only four wins away from Mario Andretti on IndyCar’s all-time list. How much does this victory mean to you?

Scott Dixon: It’s a lot of fun to win these races. They’re very tough. The competition is crazy and just even how the strategy can flip—I feel very fortunate when we’re able to pull them off. Four wins from Mario is still a long way. We’ll keep our head down and just keep trying to win races and win championships, and then the rest of it will take care of itself.

But each win feels amazing in this series, and [I] just feel very fortunate to be able to compete at the top, and be with this team, and have great partners like PNC Bank and Honda.

FS: Did it come with any sense of relief, even, having been runner-up for so long at this event?

SD: Yeah, this one is nice. I like this. (laughs) Finishing first here was a lot better than the last—I think it was the last three years I’ve been second maybe or something. It’s really nice to be in that situation. It’s great to  get another win at Indianapolis even though it’s not the big one. We’ll try for that later, as everybody else will in this field.

But it’s significant. Trying to win at this place and trying to tick off some of these tracks that we’ve come close but never really been able to get on top of, sometimes you need a little bit of luck, and sometimes you need a clean race like we did today to make it happen.

I feel really good, really pumped to be able to win here, and yes, it’s been a long time since 2008 and that [Indianapolis 500] victory…We’ll keep our head down again and try and get another one of the big trophy.

FS: You mentioned in your post-race interview that you attributed this win to both luck, in terms of the sole caution in the 2020 GMR Grand Prix, and your strategy choice to pit fairly early on. Can you expound on that? Is there something in particular that opened up such a massive lead?

SD: We kind of got a little bit lucky, but I think it also played into our strategy. We started pretty aggressive [with] all three Ganassi cars on the black tire, which was definitely pretty tough. We were able to pick up one spot on the start and maintain [position], and that kind of set us into a pretty aggressive three-stopper. That’s when our window was to pit, and then three, four laps later the yellow came out and we were the ones that cycled towards the front.

But we had the pace. We kind of struggled at the early part with the rear of the car, and the same with the red tires. I think I went out a little bit too hard on the first set and the rears got abused a little bit. We made several changes to the car throughout the next couple of stops, and the car was just on rails after that. The track went through some changes, as well. It’s like the track cooled off a little bit and grip came up, and the PNC Bank No. 9 was just strong for the last half of the race.

FS: Your team changed significantly this season, most notably with Michael Cannon becoming your new engineer. How much of a difference have you seen working with him between last month’s 2020 Genesys 300 and now the 2020 GMR Grand Prix?

SD: Our team has been very successful over the past 20 years or even longer than that, but I think you keep doing the same things a lot, too. It’s nice to have a fresh set of eyes, not just from Cannon but also the Ford GT program, especially in endurance, which I think was a big help. Brad Goldberger has been massive in just thinking about different ways of looking at dampers, car setups and oval stuff. There’s definitely areas over the last few years where we’ve kind of let slip and maybe not been as dominant as we should be as a team and kind of on the back foot a lot.

I like Cannon. He’s a great person. He’s a real racer. He’s a racer himself. I just like his approach. He’s pretty laid-back but methodical and doesn’t just throw a bunch of things at it. He really thinks to think about it. It’s been a fun start to the year so far, and if we can keep this rolling that’s obviously the goal, but we’ll see how it goes.

FS: Next weekend’s Road America doubleheader will be the first events with fans in the 2020 IndyCar season. What was it like not having fans at IMS for the 2020 GMR Grand Prix, and are you looking forward to having people back in the stands?

SD: Ultimately when you’re driving around, you don’t really see too much. When there’s cautions and the pace slows down, you kind of see the fans and the people, especially here at Indianapolis, where they fill up the middle straight on the grass bridges. All the families, you see them out there having picnics and things like that.

It’s definitely very different [without fans]…But it’s super-special to be here, very special to be on that new lift today and have the car put up onto victory circle there, and [this is] what’s normal at the moment. I think all of us feel extremely lucky to be able to be racing right now.