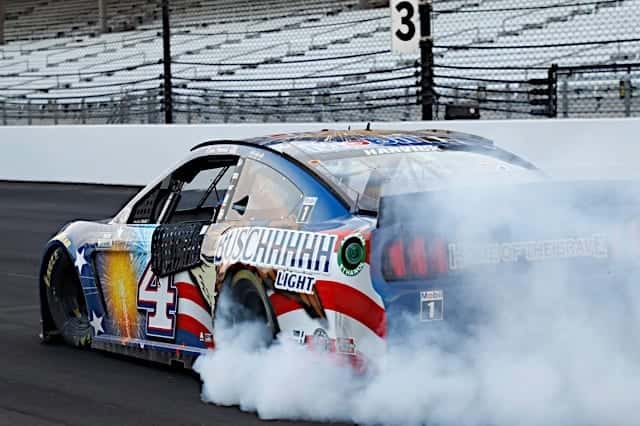 Denny Hamlin and Kevin Harvick have easily been the two fastest drivers all season in the NASCAR Cup Series. For the last several weeks, they have battled for the win almost every race, and it has been quite entertaining to watch two of the best go at it. This leads to a debate on if there could be a friendly rivalry brewing there.

Is this a friendly rivalry? What can we expect from each as the season goes on? Out of the two, who has been better and who is the favorite?

As we near the playoffs in September, there are several drivers who have had a slow start to the 2020 season but have come on in the recent weeks. One of these drivers is rookie Christopher Bell. Since the return to racing at Darlington Raceway, he has scored a top-five finish and a few top 10s along the way. Leavine Family Racing has shown more speed lately than they have in their entire history as a team.

Can Bell make a legitimate run toward the playoffs? If not, what can we expect from Bell? Can he actually win a race as a rookie?

Q: Do you see this Hamlin vs. Harvick duel becoming a friendly rivalry and lasting the rest of the season? David C., Roanoke, VA

A: Hamlin vs. Harvick has become one of the most fun battles to watch on a weekly basis. They both clearly have the best cars in the Cup Series right now, and week after week, we are seeing battles for the win between them becoming more and more intense. Not only that, but it is also between two of the best drivers of this generation of racers, which always makes it more entertaining.

If we look at the stats, Hamlin and Harvick are both having two of their best seasons in Cup. Harvick has a championship from 2014, yet his stats right now are on pace to be better than that season. He has only gotten better with age, and let us not forget how he won eight races in 2018, just two short years ago. He is capable of more.

Hamlin is on the verge of having an even better season than he did in 2010 and 2019, both years when he had legitimate shots at the championship and arguably his two best years in Cup. With four wins, he is easily going to be in the Championship Four barring any major issues once the playoffs come. Is this Hamlin’s year? It could be, as he is bound to win a title in his career.

Can we really call this a rivalry between the two veterans though? This isn’t necessarily one, but if they continue to race each other for the wins throughout the season like they have the last several weeks, it could become one. Friendly rivalry could be the best term for this. There is no hate between the two, and they respect each other on track and off the track. When you dominate a series like they have, it’s hard not to call your closest competitor your rival as well.

This will more than likely be a trend for the remainder of the season. They do not look to be slowing down any in speed, and both will win several more races in 2020. At this rate, both may approach 10 wins each, which would be a stat we have not seen in NASCAR in many, many years. All we know right now is we are witnessing greatness with Hamlin and Harvick. They are both going to be Hall of Famers one day, and it is time for us to sit back and enjoy the talents they display every week.

Q: Which driver can you see having a huge second half of the season and making a run toward the playoffs possibly? Darren P., St. Louis, MO

A: To the surprise of some, I can see Bell making a run. Yes, the rookie. There are many reasons why he can make a huge run late in the regular season.

He has come on the last several weeks, and it is because he is learning the Cup Series and the type of racing it has compared to the NASCAR Xfinity Series. His year started off fairly slow, not having much success or finishes inside the top 20. Once the racing resumed after the COVID-19 pandemic, it seems as if he and his No. 95 team got going.

This includes a solid top-five finish in the first Pocono Raceway race during the doubleheader. Since then, he has had several great runs for the Leavine Family Racing team, and he is creeping closer to that top 20 in points. It’s a far way from 16th right now, but do not be the least bit surprised if he is contending for a win or two, especially at some of the shorter tracks and low downforce races.

LFR has shown some speed at the downforce tracks, as Bell has been consistently in the top 10 to 15 in them recently. This is easily the best that team has been on the intermediates in their history in the series. They have made a ton of progress just this season, and they are going to be a threat as we wind down the season.

Will Bell make it into the playoffs? I would say no, but he will have a chance to win a race. He is going to be getting more experience at some of these tracks too, and for a rookie, that is one of the biggest things you can get.

Bell is extremely talented, there is no doubt. Toyota themselves have also been better as a whole. That can equal success for the No. 95 team going toward the playoffs in September.