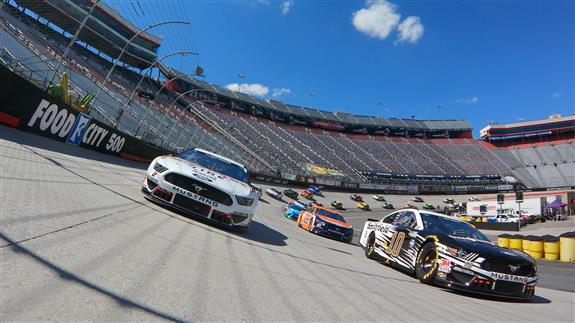 Over the last 15 years, NASCAR has been aggressive with making changes to its rules. Whether it’s group qualifying, double-file restarts, stages or shortening the length of races, NASCAR races have a much different look to them now than they did 10 or 20 years ago.

The choose cone has been featured in many short track races in this country over the last decade, but it will make its debut in NASCAR. When a race is about to restart after a caution period, drivers will get to choose in which line they want to take the restart. The first-place car gets to choose first, then the second-place car and so on from there. Essentially when drivers come out of the pits, the order they take the green flag may be completely different based on which line they decide to restart in.

But is the choose cone a logical next step for NASCAR or just a gimmick?

These Drivers are Supposed to be Professionals!

The choose cone erases part of drivers’ ability to display their talent. At a track where there is a preferred line, some drivers obviously will restart in the opposing lane. On a restart, those drivers have the same opportunity to gain or lose positions to fall into their desired lane, which can be fascinating to watch. The choose cone will likely take away those moments.

Yes, at least one driver will gamble and take the opposing lane to gain multiple positions. The choose cone gives drivers that option. But the cone also takes away from double-file restarts, which is one of the best changes NASCAR made since I began regularly following the sport.

Admittedly, one can easily argue NASCAR already implemented other gimmick elements into racing. The playoffs, the lucky dog, wave-around drivers and stages have all altered racing, making it difficult to compare today’s drivers with the greats such as Richard Petty, Dale Earnhardt, etc. To a certain extent, though, those changes became inevitable as the sport evolved.

Some of the late model series, such as the ARCA Midwest Tour, have controlled pit stops. The choose cone has a purpose there because it allows drivers to gain positions when they cannot advance their position on pit road. Meanwhile, the Cup Series has live pit stops, allowing a pit crew to help a driver win or lose the race, or positions altogether. Using the choose cone does not fully highlight a pit crew’s performance.

If a pit crew has an excellent pit stop, then a driver can gain positions. But if that driver chooses the preferred line on the restart and another driver, who suffered a longer pit stop, takes the other lane and gains positions, where is the pit crew’s reward?

The choose cone also works for those non-NASCAR competitions because those races take place on short tracks. At those tracks, the inside line is the preferred line. So, the choose cone allows all lead-lap drivers to choose the respective lane, whether it be all on the bottom or a few drivers gamble to gain positions on the top.

NASCAR does not need to use the choose cone. Let these professional drivers resolve their lane themselves. – Mark Kristl

The Right Next Step

Gimmick. There’s a word that most race fans hate. It usually means that there’s some kind of silly rule that NASCAR is considering that makes fans cringe.

As a NASCAR fan since the early 1990s (I was born in 1989), I am one of the people that believe NASCAR needs to roll back on some of the gimmicks the sport has instituted over the last 15 or so years. One of the things I really have a problem with is the unlimited attempts at a green-white-checkered finish. I remember when races ended under caution. I never thought anything of it.

To me, the choose cone does two main things. It takes away the ridiculous nonsense that happens on pit road when drivers and teams try to pick what lane they want to line up in. We’ve seen on numerous occasions over the years where drivers will stop at the end of pit road to try and restart in the preferred lane. It’s dangerous and stupid. With the choose cone, that issue is gone.

The other thing it does is it puts the fate of where a car lines up into the drivers‘ and teams’ hands, which is better. Teams would get to choose which lane they want to go in. It would take away the issue that the second-place car is always at a disadvantage because the leader gets to choose which lane to be in. You can argue it would make for a much more competitive race than it would have if we continue to do it the way we do now.

Here’s another scenario I find interesting. Many times when a late-race caution comes out many of the leaders elect to stay out to keep their track position. However, cars that are a certain distance behind may decide to pit for fresh tires and hope they gain a spot or two more than they would have on the set they already had.

With the choose cone, it would change the way teams approach that situation. We could potentially see those drivers with fresh tires line up closer to the leader than they do now, especially at a track like Martinsville and New Hampshire where one lane is clearly superior over the other. It would make the decision to stay out or pit that much tougher, knowing there may be someone with fresh tires lining up in front of you depending on the circumstances.

I am not saying the choose cone is perfect, however, I believe the choose cone will add another element to the race that fans, drivers and teams will enjoy. It puts the lineup restart in the teams’ and drivers’ hands rather than teams and drivers being forced to line up in a much less preferred line on the track.

Plus, it’s better than the alternatives. Do fans like what we do now? At some racetracks, the second-place driver gets caught in a super bad lane and winds up eighth because they are forced to line up in a lane that is far less superior. That’s fair? At least with the choose cone teams will have a slight advantage over the teams behind them because they get to choose where they go first.

Removing double-file restarts is an option, but that’s not something I want to see, nor do I think the fans want to see it. The choose cone is far and away the lesser of two evils.

In the end, it’s certainly going to change things but it’s going to add strategy to the race and add interest. It’s also going to make drivers race a little extra harder to prove that their decision was correct.

If this is considered a gimmick by some, I say it’s not nearly as bad as many of the things we currently have in this sport. It’s the right next step to take. – Clayton Caldwell

I am against it purely from a time standpoint. Nascar already has a lengthy caution period and anything that adds to that takes away from the actual action on the track.

oh my gosh! at first i though this was a joke!

Nothing more frustrating as a fan than seeing your driver line up 4th at Martinsville and, as a result of being on the outside lane, be destined to 8th or worse once the cars get sorted out. There are plenty of tracks where the outside lane is better as well. So I think it would be much more fair to the drivers. The only tracks I would not use the cone are the RP/TS tracks. Personally, I don’t think this falls under the category of gimmick.

So if the first 15 cars choose the inside line does the 16th place car get to line up beside the leader?

Go back to lead lap cars in the outside lane, lapped cars to the inside. Problem solved.

rg72 – thank you…….why does everything have to be so complicated?!?!

Well if that’s an option then let’s do that. That would be my first choice as well.

I’m all for it. I hope it works well. It should end the pit road exit games and the punishing of teams that have a good pit stop and gain spots, but end up in the non-preferred lane.

I guess we’ll see how it works soon enough. I appreciate FS pointing out the pros and cons; that will help me evaluate how well this change works once it is implemented.

Just more tricked up crap from NOOSECAR. They are losing fans left and right while trying to be WOKE. The millennials and Gen Z kids don’t care about the sport and never will. No matter how tricked up they make the sport, it will be lucky to survive. They already p(**ed off their old fans and haven’t gained any new ones. The death spiral started with the Chase.

omebody in Daytona and Detroit better hope that the millennials or Gen Z begin to care about stock car racing. We old folks wont be able to carry it forever. But when we are gone we wont care either so there.