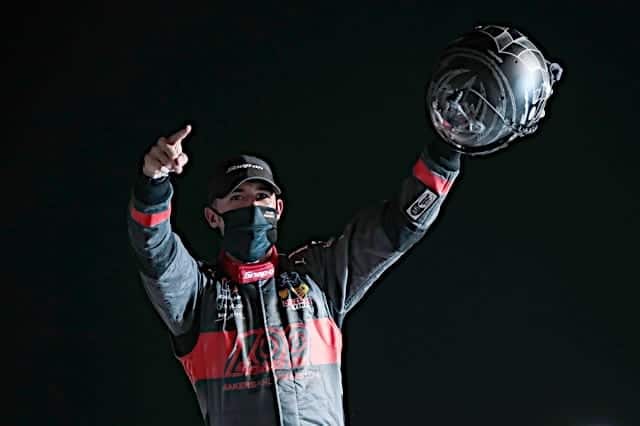 The 2020 Shady Rays 200 marked a first-time accomplishment for Austin Cindric. The 21-year-old NASCAR Xfinity Series driver of the No. 22 Team Penske Ford won at Kentucky Speedway, his first career NASCAR win on an oval track.

All his previous wins in both the NASCAR Xfinity Series and NASCAR Gander RV & Outdoors Truck Series wins had been on road courses.

“I don’t care what shape the track is, I’m just so happy this No. 22 Ford is in victory lane!” Cindric proclaimed in his interview with Fox Sports 1 after he won. “I’ve been so close all this year; these guys have given me awesome race-winning cars. I’m pumped, this is awesome.

“I believe this is a championship team and this is the start to many wins this season,” he said. “I’m so happy it came here (at Kentucky).”

The Shady Rays 200 was initially dominated by pole sitter Noah Gragson. He won the first two stages, but as the laps wound down, he found himself frustrated as he was unable to drive back to the lead.

Cindric had the fastest car in the final stage, though he had to fend off the other drivers on a few late-race restarts, including one in overtime.

Cindric took the lead on the lap 95 restart, which came after an incident involving Brandon Brown and Justin Haley. The two drivers battled hard for position for several laps beforehand. Haley made contact with Brown, who spun and hit the wall, marking the first of two incidents involving Kaulig Racing drivers.

The second such incident occurred on lap 104 when Ross Chastain slid up the track into Brett Moffitt. The two made contact, Moffitt slapped the wall and the yellow flag was thrown. Unhappy with Chastain’s driving, Moffitt drove alongside Chastain and flipped him the bird.

Three more caution flag periods took place before the race ended. Colby Howard wrecked out of the race on lap 121, while Harrison Burton got loose underneath Michael Annett and brought out the eighth caution on lap 131.

That restart sent the Shady Rays 200 into overtime. On the restart, Cindric rocketed past Chase Briscoe, his former Gander RV & Outdoors Truck Series teammate at Brad Keselowski Racing. Cindric set sail for the win, but the caution flag flew before the checkered flag, but after the white flag, for a multi-car wreck.

“I love the guy (Chase Briscoe) but he’s won enough, jeez,” Cindric said. “Those restarts were a lot tougher than I thought they would be. Obviously, he got out of the gas when he should’ve.”

“It’s cool to see Austin get a win; I know it’s been hard on him to not win on an oval,” Briscoe told Fox Sports 1 after the race. “I was telling everyone all week, I feel like this is his best oval. They have been one to beat all season long and they were able to close the deal out.

“I thought we were going to have a chance. On both restarts, especially the last one, I was so loose. Overall, I felt like this was my worst night all year just from a speed and balance standpoint. We were still able to at least be in the hunt for the win, came in fourth. So, I’m looking forward to racing at Texas (Motor Speedway). We’ll come out here tomorrow and work on it.”

Cindric’s first win of this series likely clinches his playoff berth, and he will seek to build off this momentum in the second race of the Xfinity doubleheader tomorrow night at Kentucky.