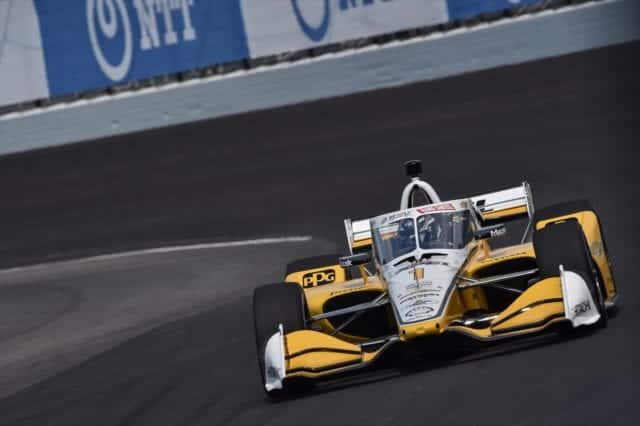 2020 Independence Day weekend was, on paper, one of the most interesting race weekends in quite a while.  The NTT IndyCar Series paired with the NASCAR Xfinity Series for the first ever INDYCAR-NASCAR doubleheader.  It was a simply delicious two-for-one racing bonus for race fans. Even better, the NBC INDYCAR broadcast team delivered a top-quality performance that helped make up for a bit of a snoozer as Scott Dixon ran away with the race win.

In recent years, the now-GMR Grand Prix (GMR stands for Global Medical Response) would normally be the first INDYCAR race on over-the-air television.  But that is not the case this year as the NTT IndyCar Series season opener, the Genesys 300, aired on NBC back on June 6.

Regardless, you had a pretty big race on tap.  NBC went all out, bringing in Mike Tirico for the weekend as racing host, his first racing assignment since NASCAR Ford Championship Weekend at Homestead-Miami Speedway.  These days, Tirico is more or less the voice of NBC Sports, replacing Bob Costas.  If he’s there, he’s supposed to bring a bit of gravitas to the proceedings.

While Tirico is not necessarily the most knowledgeable about motorsports, his role doesn’t require him to be.  In this case, he had only two on-air tasks.  One was to simply introduce the broadcast.  The man’s been on television for over 25 years, so that’s nothing for him.  His other big responsibility was to spend time on the pagoda with Dale Jarrett and talk about the atmosphere at the speedway (with Rutledge Wood chiming in).  The idea here is that NBC likely thought that there was going to be a lot of carryover between the INDYCAR and NASCAR audiences Saturday.  However, whether there actually was crossover remains a bit of an unknown.  Although the Xfinity race outrated the INDYCAR event, the audience difference was not enough to make firm conclusions.

The INDYCAR broadcast came on with a tight schedule, so there was no real pre-race coverage.  Tirico’s introduction led directly into the command to start engines.  If you wanted a real idea as to who was going to be strong on Saturday, you would have had to do some extra work. It would have been nice to have at least one pre-race interview to set up the on-track action to come.

Unlike with NASCAR, NBC’s on-air commentators (Leigh Diffey, the very busy Townsend Bell and Paul Tracy) were on site in the Pagoda at the track.  While it was never specifically stated, it appears that Diffey was on a separate floor of the building from Bell and Tracy.

That’s a change from the setup NBC had at Texas Motor Speedway, where the trio were all in the same room, but separated from each other.  To a certain extent, it does cut down on some of the usual banter between the three, which is the biggest gripe I had with the weekend’s coverage.

Speaking of Bell, Saturday was a doubleheader for him as well.  As soon as the race ended, he hightailed it to the airport in order to fly to Florida so that he could be compete in the WeatherTech 240 at Daytona.  That ended up being quite the adventure with a diversion and a high-speed ride with Jimmy Vasser from Jacksonville to Daytona Beach.  He’s probably the only person happy that the IMSA race in Daytona was delayed due to lightning.

Much like Sunday’s (July 5) Big Machine Hand Sanitizer 400 at the Brickyard Powered by Big Machine Records, it was very hot during the race, and NBC did a great job of covering that storyline.  Getting fluids at a reasonable temperature into the drivers was a problem.  The in-car camera in Colton Herta’s car revealed on Lap 24 that his drink hose came off his helmet, rendering him unable to drink.  Turns out that this was because his drink bottle broke in half (that’s a new one).  Other drivers actually dumped some of the on board drinking fluids because they were literally as hot as the cockpit itself.  With in-car temperatures hovering in the 120-130 degree range Saturday afternoon, that’s no picnic.  Even winner Scott Dixon was not immune as the hose from his Koolbox came out of his helmet during the race.  The team couldn’t get it back in, meaning that Dixon roasted his way to victory.

Since then, some rule changes have been made to alleviate the cockpit heat.  RACER is reporting that INDYCAR will move the drinking fluid reservoirs starting this weekend to make for a cooler fluid for drivers to consume.  They’re also investigating additional ways to circulate air in the cockpit.

You would think that tire wear would be easier to notice in INDYCAR as compared to NASCAR due to the open wheels?  Not necessarily.  A few drivers did have a telltale black stripe going around their tire like you see from time to time in Formula 1 (most notably Patricio O’Ward), but otherwise, not so much.  What did show up were the lap times.  There were multiple seconds of pace between fresh tires and worn tires, another storyline NBC covered effectively.

As compared to what we saw Sunday during the Cup race, there was a good amount of racing to be had, shown consistently and promoted well by the NBC booth.  Despite only one caution in the entire 80-lap race, there was still a decent amount of racing for position.  Yes, Dixon won by nearly 20 seconds, but that lead really only got big after the final pit stops.  Basically, he won the race by putting down four or five laps that were literally two to three seconds faster than Graham Rahal.

As for the coverage itself, I’m still not a fan of the whole zoom in on the flagstand thing at the finish. It’s just an Indianapolis thing, but I don’t care if it’s traditional or not; it’s just not cool.  If there was a race to the line for the win, a good number of viewers might miss out on who won.  It’s been a thing for something like 35 years and it’s gone on long enough.  You’d think that it would have gone away permanently when ABC left INDYCAR, but to my dismay, NBC has carried on the tradition.

Despite the race having only one caution, there was very little post-race programming.  Viewers got an interview with Scott Dixon in revamped victory lane and a check of the unofficial results.  Given that the race actually ended pretty close to 2 p.m ET., there was an US Bank NBC Sports Report where INDYCAR/Penske Entertainment Corp. CEO Mark Miles joined Tirico and Jarrett on the pagoda to talk about the race weekend in Indianapolis.  In addition, Miles talked about the Race for Equality & Change, INDYCAR’s new effort to support diversity and inclusive in the industry.  Once that was complete, it was onto Countdown to Green for the Pennzoil 150 at the Brickyard.

Overall, this event was a relatively quick race in almost every way for those of us who watched at home.  Yes, Dixon kicked butt, but it was enjoyable to watch.  You had good racing.  NBC INDYCAR coverage appears unbound here to only show the very front like it can be in NASCAR; there was plenty of back-and-forth in terms of finding position battles on the track in the middle of the pack.  The dudes on the NASCAR side of the fence should watch some INDYCAR races in order to better cover their events.

Like what you read? This article also appears every Thursday in our FREE Frontstretch Newsletter (published Monday-Friday). Click here to sign up for the latest in racing news, features and commentary from some of your favorite Frontstretch staffers!