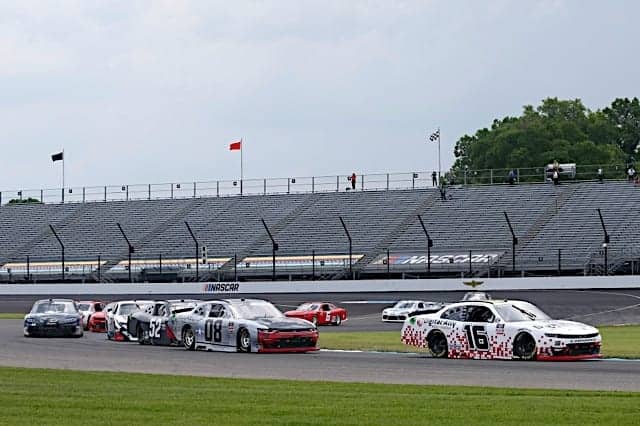 Denny Hamlin and Kevin Harvick have been the class of the field in the NASCAR Cup Series in 2020, but who is the more likely champion?

Zach Gillispie: Judging by his history, I’m more inclined to say that Denny Hamlin is the most due for a championship. However, Kevin Harvick‘s consistency gives him the edge. Rodney Childers is the best crew chief in the garage, and his pairing with Harvick is like a fine wine: they only get better with age. That said, Hamlin and crew chief Chris Gabehart have been on fire this year, but I don’t have faith that Hamlin’s perennial playoff gremlins will not appear this year.

Mark Kristl: Based on their respective statistics this season, Harvick gets the nod.  He has led more laps, is the series points leader (which carries a 15-playoff point bonus) and has a better average finish.  Plus, while both drivers race for top-notch teams, if more than one Joe Gibbs Racing driver makes the Championship 4, the resources will be split.  No other Stewart-Haas Racing driver appears to be in championship form, which would make Harvick its top priority for the championship race.

Christian Koelle: It’s funny because the championship race this season is at Phoenix Raceway, and these two guys have absolutely put a whooping on the field there over the last few years. Neither of these drivers will be hoisting the championship trophy, though. Alex Bowman is my champion this season, and Brad Keselowski will be on the Championship 4 stage because he did it in the last season of Dodge being with Team Penske, so how big would it be for Keselowski to go out on top at the end of the season?

Jared Haas: Harvick has been more consistent with his runs, but Hamlin may have the advantage. Hamlin and Harvick have finished in the top five for the last five races, and the former has become a championship contender more recently since crew chief Gabehart returned. Harvick, meanwhile, has been in the points lead since Phoenix. While Hamlin has dealt with more adversity like ballasts falling out and tires going down while he was leading. Harvick has not had bad luck bite him as much. The championship could come down who makes a mistake or bad luck. Hamlin could be the champion because it seems like the champion has to battle some adversity.

Now that we’ve seen the Xfinity Series race on the Indianapolis Motor Speedway road course, should the Cup Series run on it as well?

Koelle: No. Xfinity needs to go back to Lucas Oil Raceway, while Cup remains on the oval. That’s the way it needs to be no matter how boring the racing is. The last four races have actually been really exciting. The ARCA Menards Series put on a hell of a show Friday night at LOR, and both Gander RV & Outdoor Trucks and Xfinity accompanying the series would be best for business. Track Enterprises tries very hard to put on great shows with the little it gets, and if given the opportunity, it’d hit a home run. As for the oval, run an NTT IndyCar Series race on the road course Saturday alongside the Driven2SaveLives race at Indy’s dirt track, and then have the Brickyard 400 on the big track on Saturday.

Kristl: Absolutely!  Once again, tires were a significant problem for the teams in the latest Cup race there.  Over a quarter of the laps (43 of the 161) were run under caution with an average green flag period lasting only 11.8 laps.  Furthermore, the Indianapolis 2.5-mile oval will never be known for NASCAR; it will always be associated with IndyCar.  NASCAR has an opportunity to capitalize on the Indianapolis road course, where hopefully fewer drivers will battle tire issues and the race will be far more exciting without so many cautions (nine in last weekend’s Cup race).

Gillispie: Yes, yes, yes. The Cup race on Sunday was one of the most exciting in recent memory at Indy, but the hype and anticipation surrounding the road course did not disappoint. What a fantastic four-car battle we saw in the closing stages. Despite that, I was quite entertained with both events last weekend. Why can’t we have two Indy Cup races, one on the road course and one on the oval? Then, when the product on the oval begins to disappoint again, just axe the oval and hold just the one event on the road course each year.

Chase Briscoe is having a career year in NXS. Where do you see him racing next season?

Kristl: Chase Briscoe is becoming too hot a commodity not to be racing in the Cup Series next year. Rumors suggest he will replace Clint Bowyer as the driver of the No. 14 at SHR.  If not there, Front Row Motorsports should take back its third charter and field an entry for Briscoe.  Team GM Jerry Freeze has said he doubts the team will field three teams, but Briscoe would be a superb choice.  He and John Hunter Nemechek would be a youthful duo for the organization, which has exceeded expectations this season.

Koelle: With Kyle Larson‘s name beginning to round SHR and with really only one driver in SHR underperforming, Briscoe goes somewhere else. If Corey LaJoie leaves Go FAS Racing, then I could see Briscoe there; after all, that organization has assistance from SHR. Otherwise, it sounds like Briscoe is going to get the short end of the stick because of Larson’s impending return. Kaulig Racing could have an opening next season if Ross Chastain gets the No. 42 like he deserves. Also, JR Motorsports is another team that could have him if one of its drivers gets called up to run the No. 48 at Hendrick Motorsports. No matter what, though, Briscoe has the talent behind him but not the money, and that’s where he hits a brick wall.

Gillispie: This year, Cole Custer has really disappointed me in the No. 41, as have Christopher Bell, Erik Jones and Daniel Suarez. Tyler Reddick may be the exception, but the common denominator is that teams’ve got to stop rushing these young hotshot Xfinity guys up to Cup. Xfinity is where Briscoe belongs for the next several years, because he is absolutely the best driver in the series, and he is just in his second full season. If you can continue to develop him in the series, he will be the next Cup superstar in 10 years. He should stay in the SHR NXS program. Where do I think we could possibly see him racing if not? It may be a long shot, but there is a gentleman who needs an employee. He has had a history of making some questionable and surprising hires before and has proved everyone wrong time and time again. His name? Rick Hendrick.

Watkins Glen International was chopped from the revised Cup and Xfinity schedule. Was the Daytona International Speedway road course the best possible replacement?

Gillispie: It will be a good experiment, but it should not get attached to the schedule going forward. As a purist, a Daytona oval race should not get axed to compensate. There is a little road course in Indianapolis that should be calling everyone’s name however.

Kristl: Given the circumstances, yes and no. Yes, it is a new course on a famous track. NASCAR kept that race on a road course circuit too. No, it is not the right choice unless NASCAR allows teams to practice and qualify for the race. Teams do not know how the tires will respond at this course, drivers have never competed there before, and crew chiefs do not fully know how to properly adjust the cars throughout the race.

Also also, they had Xfinity do pratice for the Indy Roval, so Daytona shouldn’t be different then.