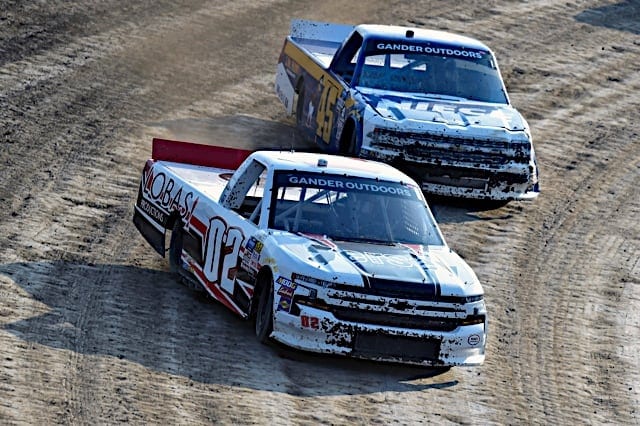 “Since we started working on this event in September 2012, it has been a collective team effort,” said Roger Slack, general manager of Eldora Speedway. “When we held the first NASCAR race on dirt in almost 43 years, nobody knew what would happen, what to expect, if it would work or if there would be a second one. We all took a giant leap of faith and placed a lot of trust in each other – Eldora, NASCAR, the teams and, most importantly, the race fans – that we would all deliver a successful event.”

And that leap of faith was totally worth it. Each year, despite thinking it’s impossible for the racing to be better than the previous event, Eldora never fails to disappoint. Close quarters racing, dirt flying, smiles beaming and a magical atmosphere you can almost feel through the television have highlighted each of the Truck Series’ seven previous visits there.

“Losing this event is a gut punch for everyone who is a part of it,” Slack continued. “We’ve now lost races for every single local and national division that competes at Eldora. We cannot hold events without healthy race fans and racers. It’s that simple. The fastest way for us all to be back together again at Eldora, with full grandstands and full campgrounds and $2 beers, is another collective team effort.

“As a community, racers and race fans need to heed the advice of our local doctors and nurses: practice social distancing; wear a cloth face covering, bandana or mask; wash your hands; keep sanitizer at the ready. The virus knows no county line or state border, and it’s on all of us to do our part to stop the spread. Until we do so, Eldora and a lot of speedways are going to sit empty.”

What stings the most is that the Eldora Dirt Derby is one of the top races on my radar every season – if not THE top race.

Let me be clear here: This is in no way a shot at the great racing the series puts on at pretty much any track it visits. Part of my love for Eldora specifically has always been the completely different style of racing every year that turns into somewhat of an equalizer between the haves and the have-nots.

After all, if you’ve been watching since the Truck Series started visiting the dirt track, I know you remember Norm Benning’s 2013 effort in the last chance qualifier to make the field all while other drivers cheered him on. But the most heartwarming part of the story is that several teams stepped in with people to help put Benning’s heavily damaged truck back together enough to run the main event.

“I couldn’t get to my own truck through all the people working on it,” Benning said at the time. “I want to personally thank each and every one of them. There were so many, I can’t remember them all. But I really appreciate what they did.

Or what about Bobby Pierce nearly winning this race for the Mittler Brothers Motorsports in 2015? Normally a virtual unknown, the late Mike Mittler’s team suddenly popped in the spotlight for a little while … and with a driver who was making his Truck Series debut.

Pierce started on the pole but was shuffled back on an early restart. But instead of giving up, he held onto it and raced his way to the front of the field to engage in multiple battles with leader and eventual winner Christopher Bell.

“The last 10-15 laps, I was really going for it,” Pierce said after the race. “After watching Kyle (Larson) beat the wall down last year, I knew these trucks could take a lot before they start falling apart. Whenever I hit the wall with the truck, I made sure it was the back end. I tried to keep the front end out of it, but a couple of times we got up in there. That’s just what happens when you’re really going for it at the end.

“Christopher did an unbelievable job. Hats off to him. He raced clean the whole race. It was just a lot of fun, and beating the wall down is something I’m normally good at, so it’s been a great week.”

Need a more recent example? How about the epic battle to the finish by Chase Briscoe and Grant Enfinger in 2018? The even better part? Briscoe was racing as a teammate to Enfinger in a one-off race for ThorSport Racing, which didn’t matter when everything was on the line at the checkered flag.

With all of that said, I completely understand what’s going on with the global pandemic, and that’s why fans can’t be in the stands for most races. It’s an unfortunate part of the world we live in right now.

There is a sliver of good news, though. Eldora’s press release made it clear that the track is in talks with NASCAR about the 2021 season. There’s always that lingering concern that the financial damage done, especially for a small dirt track, is something that will prove to be the end. But hold out hope that we’ll get to return to Eldora when the 2021 schedule is revealed.

“No matter how big this (sport) gets, tonight was an example of the passion we all have for what we do,” Eldora owner Tony Stewart said after the inaugural race. “You don’t see that with pavement racing. It gives us hope for why we all do this.”