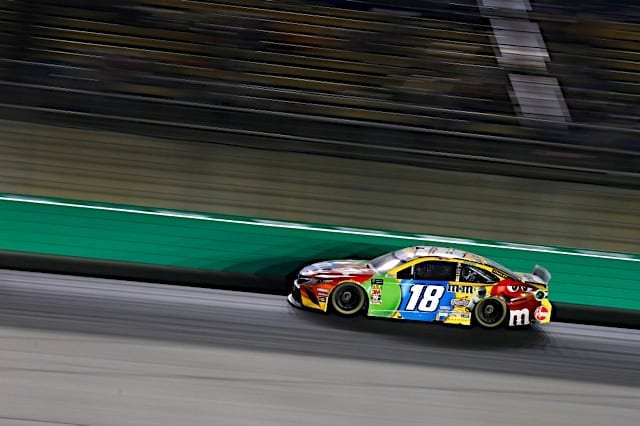 NASCAR Cup Series teams head from the prestigious Brickyard, Indianapolis Motor Speedway, to one of the newest tracks on the schedule: Kentucky Speedway. It’s time to set your NASCAR DraftKings lineup for Sunday’s (July 12) Quaker State 400.

After a few weeks at 2.5-mile facilities, drivers return to a cookie-cutter 1.5-mile track in the Bluegrass State. Kentucky is most similar to Las Vegas Motor Speedway and Homestead-Miami Speedway in terms of shape, but it runs similar to most intermediates you see on the Cup Series circuit.

There are a few more laps in this one than last week — 107 more, to be exact — which means more bonus points available for laps led and fastest laps. Look for whomever runs up front to stay there; last year at Kentucky was perhaps an outlier as no one led over 100 laps, unlike the previous eight races. However, the package the cars will use Sunday is the same one used in last year’s event.

Before I move on to this week’s picks, let’s review the results from Indianapolis Motor Speedway.

It was a good week, but could’ve been even better if Denny Hamlin kept the lead and Matt DiBenedetto didn’t crash on the final lap. Still, this lineup easily cashed the $1 single-entry double up and won $4 in the $1 Happy Hour tournament.

Bell is awfully pricey to be in a lineup, but some of his results this season are enough for me to overlook his salary. Just last week at IMS, Bell gained 23 positions to finish 12th, which increased his DraftKings score to 56 fantasy points. Since returning to competition in May, this rookie has four top-10 finishes and four DraftKings scores above 50 points. Much of that is thanks to his poor starting position; but while it’s understandably frustrating to start so far back week in and week out, it helps daily fantasy players when he earns a top 10.

Hopefully, Bell will do that again at Kentucky, a place where he led 89 total laps and won in 2018 in NXS. Don’t let his first time here in Cup throw you off; the Leavine Family Racing No. 95 Toyota can be a contender.

What is Busch doing here when he has struggled and failed to visit victory lane this year? Well, there are several reasons. First, Busch hasn’t really struggled in recent weeks, except two atypical crashes at Pocono Raceway and Talladega Superspeedway. Busch has seven top fives and nine top 10s so far and was the last Joe Gibbs Racing competitor left at the Brickyard last week (sixth).

Even though Busch still hasn’t won this season, if he leads a lot of laps and records a top 10, it could produce a good DraftKings score. The reigning 2019 Cup Series champion needs to jumpstart his season at some point.

Also, Busch is pretty good at Kentucky, too, notching two wins and only one finish outside the top 10. Last year, he almost won the race but lost to his brother Kurt after a fierce battle to the line. Still, Kyle led 72 laps en route to a runner-up result. In total, he’s led 621 circuits here — more than 25% of the Cup laps ran at the 1.5-mile track. Since he’s starting first, there’s a good chance to again lead laps and potentially earn his first 2020 victory. Remember what I said above about one driver dominating….

Reddick hasn’t had as many positive results as he’d like since May’s return to on-track action. However, the Richard Childress Racing rookie did end up eighth last week at Indianapolis. He scored 42 DraftKings points after that strong result, putting him back in playoff position after some up-and-down weeks.

Most notably, though is how well Reddick performed in the Dixie Vodka 400 at Homestead-Miami Speedway. The No. 8 Chevrolet driver gained 20 positions on the track and recorded 48 fastest laps, producing a total of 84.8 DraftKings points. That’s incredible!

Reddick also has great Kentucky success from the Xfinity Series; in 2017, he led 66 laps en route to victory. Even though NXS cars are a bit different than Cup, if his car has the same type of handling package as Homestead, Reddick is set to have another high-producing score in DraftKings.

Kenseth seems to finally be in his element after struggling since a return to NASCAR competition. Last week, Kenseth showed strength after leading 12 laps and ending the race in second, just behind Kevin Harvick. Additionally, the No. 42 Chip Ganassi Racing pilot finished 11th and 12th in both races at Pocono. All these results helped him score 30 DraftKings points or more, including 67 points on July 5.

Lastly, at Kentucky Kenseth had six consecutive top-10 finishes from 2011-2016, nabbing the win in 2013. Hopefully, he can continue his good performances this week.

Dillon is here mainly because of his accomplishments at 1.5-mile tracks like Homestead and Las Vegas Motor Speedway. His seventh-place finish at HMS gave him 49 fantasy points on DraftKings. Also, back in February, Dillon ended up fourth at Las Vegas, a surprise run which increased his DraftKings score to 57.8. Those are really good scores for this price range, and if Dillon can break the top 10 barrier at Kentucky, he would undoubtedly help your DraftKings roster overall.

Another week, another dark horse nomination for the No. 34 Front Row Motorsports Ford driver. McDowell continues to be cheap and yet achieve good results this season for daily fantasy rosters. Last week, he scored his second top 10 in three races, gaining 20 spots on the track to end in seventh. The career-best performance outside pack racing superspeedways resulted in a very high DraftKings score of 57.

So far in 2020, McDowell has two top 10s and 10 top 20s in 16 events; his average finish of 19.4 is much more improved than previous seasons. Starting back in 30th, the veteran will again score well on DraftKings if he ends higher than 20th.