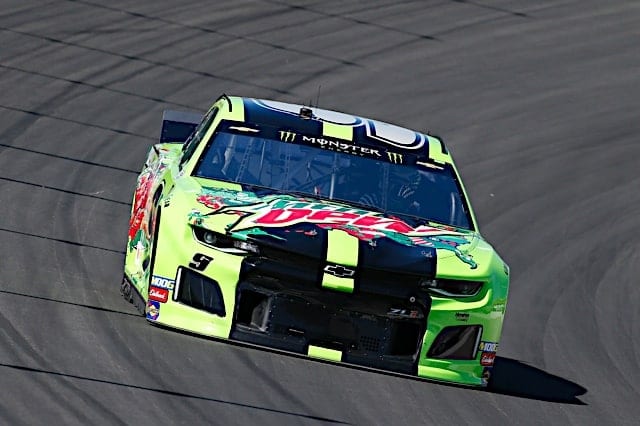 This weekend marks the 10th NASCAR Cup Series race at the Kentucky Motor Speedway, still the newest facility on the Cup schedule with the exception of the Charlotte Motor Speedway ROVAL.

This weekend also marks the 20th anniversary of the speedway’s opening. While Kentucky seems like a natural location for a Cup race, in reality, it took a very long time for it to make the jump. After an anti-trust lawsuit by the original owner, years of litigation resulting from it, and a sell to Speedway Motorsports Incorporated, Kentucky finally hosted its first Cup event in 2011.

Kyle Busch won the very first Cup race there, holding off a hard-charging David Reutimann in the closing laps. While there were hiccups for the first event – namely a huge traffic jam that caused a number of fans to never even get to the track – those were ironed out in the following years and Kentucky has remained a yearly stop for the series.

In 2016, the track was repaved. Turns one and two are now slightly more banked than turns three and four. While it’s not a gigantic difference, it’s still enough that a good crew chief is going to have his hands full all day trying to make the car work on more than just one set of corners.

Harvick is on an absolute hot streak right now. Even though he has failed to win at Kentucky so far, after his win at Pocono Raceway a couple weeks ago, it’s now the only facility on the schedule that the 2004 champion has not visited victory lane at.

Oh sorry, I lied. Harvick has won twice in the NASCAR Xfinity Series, including the track’s first NXS race in 2001. If Harvick can win on Sunday, he would be just the second active driver on the schedule who has won at every facility on the schedule.

(It should be noted, however, that Harvick and Kyle Busch have not won on the Charlotte Motor Speedway ROVAL. This is why I wrote facility and not layout.)

Second place in points doesn’t have a sterling record at Kentucky. His most notable result came in 2017, when he finished third. Since almost winning at Bristol last month, Elliott has been fairly quiet in the results department, leading laps here and there but not winning any races or stages.

Still, there’s a reason he’s second in points. The Hendrick Motorsports mile-and-a-half program is a force to be reckoned with. Elliott’s most notable result in the last month was second at Homestead, which, not coincidentally, was the final mile-and-a-half track on the schedule.

Last year’s race at Kentucky ended in a duel between brothers, with Kurt finally prevailing over the younger Busch after having never beaten him in a first-second finish.

The defending race winner being below $10,000 should always be a part of any fantasy team. Kyle Busch may have a better overall record than his brother, but Kyle is also way too expensive at $13,000, nowhere near his worth as somebody 10th in points.

The 2004 champion is on-pace for his best season in five years. Although he’s definitely on the back-end of his career, having just celebrated his 700th Cup start last week at Indianapolis, Busch still has speed at age 41.

At this time last year, Wallace was struggling just to stay in the top 30 in points. Now, Wallace finds himself just 42 points behind sixteenth in points with just 10 races to go, solidly in the playoff hunt.

While Wallace’s season has been marked by his off-track advocacy, he’s also in his third season bump. For whatever reason, a lot of drivers suddenly have a marked improvement in their third full time season. Other examples of this phenomena would be David Ragan, Juan Pablo Montoya, Chase Elliott and Brad Keselowski.

Wallace’s best finish at Kentucky came in his brief substitute role for the then-injured Aric Almirola in 2017. The young driver finished an impressive 11th in just his fourth Cup start.

Nemechek doesn’t have a particularly varied resume at Kentucky. Obviously, he’s never ran a Cup car there, but he has competed in the NASCAR Xfinity Series and the NASCAR Gander Outdoors Truck Series in the Bluegrass state.

Nemechek has never won in Kentucky, but he did finish second in the 2016 Truck race. More important than his track record, however, is how great he’s been this year for Front Row Motorsports. If Nemechek can hold his current points position of 22nd, that would be the second best result in the team’s history- with just Chris Buescher’s playoff run off of a surprise rain-out victory beating him out of the honor.