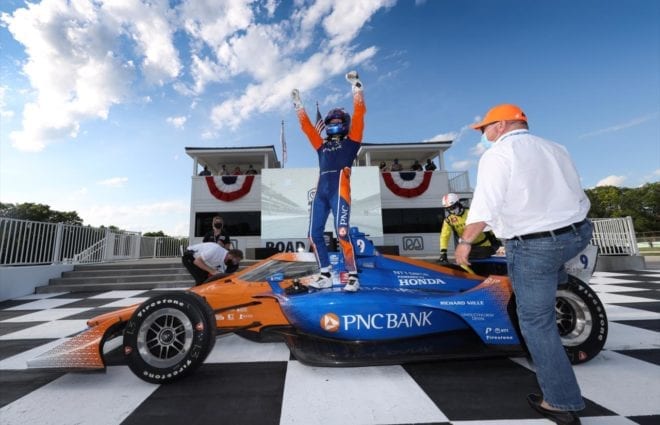 The 2020 Rev Group Grand Prix at Road America kicked off on Saturday (July 11) with an exciting first lap for the NTT IndyCar Series, and culminated in a familiar sight: the No. 9 of Scott Dixon crossing the finish line first. An early pit stop and several late-race yellow flags played right into his hand and allowed the dominant Chip Ganassi Racing driver to flaunt his skills again.

“I don’t know how that happened, man!” an overjoyed Dixon said after the win. “It’s a huge weekend for us. The car was really difficult to drive… it’s really tricky on the rears.”

Josef Newgarden took the lead from the pole at the start, but he had a tough battle from four cars behind him with Ryan Hunter-Reay posing the most significant challenge. Newgarden, though, maintained the lead. Rinus Veekay put in a stellar first lap by passing Simon Pagenaud on the outside at the carousel. Alexander Rossi‘s difficult streak continued when he had an off-track excursion through a track-side advertisement, which Marco Andretti also picked up and dragged under his rear wing. All of that happened on just the opening lap.

Rossi and Andretti came into the pits to remove the debris from their front wing, putting them down in the rear of the grid. By the end of the first five laps, the lineup seemed to have relatively settled into a consistent top five: Newgarden, Hunter-Reay, Graham Rahal, Santino Ferrucci and Jack Harvey. Two laps later, Will Power ran wide, leaving himself open for Patricio O’Ward‘s attack. Power was forced to aggressively defend his position while complaining of steering problems on his radio.

Rahal looked to have one of the best cars in the field yet again, passing Hunter-Reay on lap eight. Hunter-Reay ran wide and thus became a target for Ferrucci. Newgarden was left to build up a safety buffer in the lead. Ferrucci made his daring move on lap 11 and slipped by Hunter-Reay for third.

The REV Group Grand Prix’s first pit stop cycle began on lap 13 with Team Penske teammates Power and Pagenaud kicking things off. Newgarden came in the next lap after having led every lap up to that point. Rahal had a pit stop problem, with his fuel refusing to flow. He had a long stop and fell back into 11th. Ferrucci began to cut seconds off of Newgarden’s 10 second lead, promising to mount a strong challenge for the win. With Alex Palou settled in fourth, Dale Coyne Racing seemed to be having a stellar weekend.

Things were relatively smooth until lap 26, when Dixon signaled the second round of pit stops. Stuck behind several cars and unable to move, the early pit was a strategic move on Dixon’s part to gain positions when others dipped in for tires. The leaders came in two laps later when disaster struck. Newgarden stalled twice and lost several seconds, coming back onto track in 10th. Power and Dixon were then left to battle for the lead with Power passing Dixon, causing the New Zealander to lock up his tires. Dixon seemed to have the advantage, but Power threw his car into the lead.

On lap 38, the No. 60 of Jack Harvey brought out the first full course yellow in three years after locking up the brakes and running into a gravel trap.

“Felt a big chattering in the exit of [turn] 1,” Harvey reported before noting that he had no brakes by the time he hit the third turn.

Harvey had been running in the top five previously. Nearly everyone came into the pits on lap 40, where Dixon took advantage of a poor stop for Power by securing the lead. Dalton Kellett tapped the No. 18 as Ferrucci was pulling out of his pit which saw Ferrucci drop back into seventh. Andretti lost power on lap 41 and had to be towed back to the pits.

The restart saw drivers running two-by-two. O’Ward tapped Conor Daly, and he lost control into the gravel before then crashing into the wall. The whole back end was knocked off the car. Daly exited the car with help complaining of pain in his shoulder. It will likely require a late night by the Ed Carpenter Racing team to get the car back in shape for the second REV Group Grand Prix on Sunday, July 12. Daly himself will have a long night to get back into physical racing shape, too.

O’Ward gets into Daly, Daly finds the water barriers, and we’re back under caution. #INDYCAR | #REVGROUPGP | #RoadAmerica pic.twitter.com/oOlI1wEBdL

“Pato got out onto the curb and was slow exiting,” Daly said after coming out of the care center. “I had enough of a run that I thought it would be okay. I’ve never raced with him that much. It’s really hard to go two wide there. It’s probably a little bit on the both of us. I can’t throw the blame on him, but it’s a little bit of a shame.”

Daly said he was confident that the No. 20 ECR team would have the car back together for the race Sunday. He also noted that his shoulder had “popped out” and that he would ice it ahead of the next day’s race.

On the next restart, Dixon gained a significant advantage when Power dipped a wheel off the track. Palou managed to make a daring pass on Hunter-Reay in the grass before another caution came out, this time for Dalton Kellett who slid into the gravel. Palou ultimately didn’t secure the position.

The next restart came on lap 9, and Palou continued to pass Hunter-Reay easily. Dixon assumed the lead, almost immediately stretching out an impressive gap over second-place Power. O’Ward made a late pass on Pagenaud with six laps to go, pushing Pagenaud way off the track. With four laps to go, Rossi had contact with Max Chilton and dipped off the track twice with what appeared to be a broken steering arm, another demoralizing race for the No. 27 Andretti Autosport driver.

On the final lap, Power ran wide and left himself open to be passed by Palou, but the move never happened. Dixon stretched out a 2.5 second lead and took the checkered flag. Power finished second with Palou third. Hunter-Reay and Colton Herta rounded out the top five.

THREE IN A ROW for @scottdixon9 to start the season 💯 pic.twitter.com/RPEG5pa9pc

“It was a good drive. He didn’t start exactly where we wanted him to today, but he persevered. It’s about the in laps, it’s about the out laps – it’s the stuff you don’t see,” team owner Chip Ganassi said about another dominant day for his driver Dixon.

In regards to part two of the REV Group Grand Prix, Ganassi only had one request: “I’d like to start a little better. That’d be nice.”

Ever humble, Dixon deferred his success to his team.

Third-place driver Palou denied that he was happy with his performance. “We’re still not there,” Palou said. “We’ve gotta put in that momentum tomorrow.”

Power noted that he struggled with the wrong gears all day, saying that he “threw away” the win.

Elizabeth Blackstock is lead IndyCar writer for Frontstretch, a freelance journalist, and a novelist. She earned her bachelor's degree at the University of Texas at Austin and is currently pursuing a dual MFA/MA degree at Arcadia University. She is in love with her car, a 2013 Mazda 2.
@@eliz_blackstock
Previous Bret Holmes Moved from Lead Late, Earns Career-Best Finish at Kentucky
Next Sheldon Creed Wins Rain-Shortened Kentucky for 1st Career NASCAR Truck Win