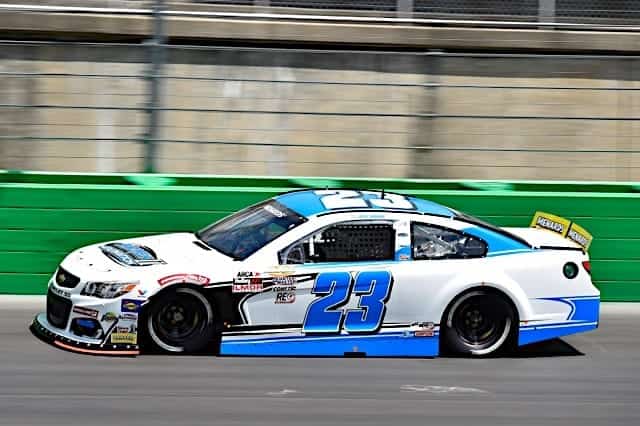 When the door opened, Bret Holmes took the opportunity. And had it come later in the race, he may have earned his first career ARCA Menards Series victory, but that wasn’t what was in the cards for Holmes at Kentucky Speedway on Saturday afternoon (July 11).

With less than 35 laps to go in the General Tire 150, Michael Self and Ty Gibbs made contact in turns 3 and 4, resulting in both drivers sliding up the track, narrowly keeping their respective cars off the wall. That opened the door for Holmes to take the lead.

Two late-race cautions gave Gibbs the chance to come back up and battle for the win. Holmes was able to hold him off for a bit but the “grip strip” was important in Saturday’s race, and with Gibbs using it, he nudged the No. 23 up the track and took the lead and eventually the win.

Holmes had no hard feelings for the way Gibbs raced him.

“We fired off kind of loose there right off the restart, and I don’t know if I was just trying to push so hard and wasn’t realizing it,” said Holmes. “That opened up the door for [Gibbs], and I think he was a little bit more consistent than I was right after the restart and through a run, but we definitely had the speed to contend for it there.

“As I said, I know it’s just really tight racing here at Kentucky and everybody is up there running in the grip strip. And it’s hard to get down in the bottom a little bit, and most people get a little squirrelly when that happens, especially when you have a car on the outside taking the air off your right side. That’s just part of it, and I don’t mind that stuff as long as it’s taken back with the same attitude.”

Despite not getting the win, Holmes finished a career-best second and had a solid points day. The 23-year-old has put together a strong season so far, finishing inside the top 10 in all but one race this season.

Holmes noted that if his team, Bret Holmes Racing, can string together more such finishes and earn some victories, they will run a full season this year. As with anything in racing, funding is everything, and Holmes has been working his tail off with his family’s construction company as of late to try to get more funding.

Up next for ARCA is Iowa Speedway, where Holmes has three career starts with the best finish of eighth (twice). He remains third in points,