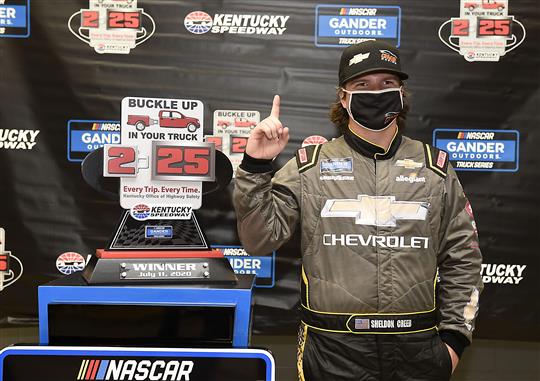 The apocalyptic-looking skies above Kentucky Speedway finally opened up, dumping rain on the racetrack and sending Sheldon Creed to victory lane for the first time in the NASCAR Gander RV & Outdoors Truck Series.

Creed won the rain-shortened Buckle Up in Your Truck 225 on Saturday evening (July 11), winning stage 2 at Kentucky and being in the right place at the right time when lightning was detected in the area. The California native became just the second driver, aside from Grant Enfinger, to lock himself into the Truck playoffs.

Creed’s GMS Racing teammate Brett Moffitt led the field to the green flag on Saturday, but three early cautions kept the field in check. This included Spencer Boyd‘s No. 20 truck smoking on the opening lap, dumping fluid and bringing out the first yellow.

Derek Kraus and ThorSport Racing teammates Johnny Sauter and Ben Rhodes dropped to the back of the field at the start of the race due to a filler panel violation in pre-race inspection. They were also each docked 10 points for the violation. Sauter made the start to his day even worse when he was the only truck to pit under the first caution and was hit with a speeding penalty. But Sauter recovered, working his way up to the top five late in the race.

Once the green flag flew again, six more laps were completed before another yellow waved – this time on lap 15 for Codie Rohrbaugh, who spun while three-wide and backed into the outside retaining wall.

The first stage’s third caution came in the form of Tim Viens, who spun on his own in the corner and slid down into the infield. Viens got his No. 49 truck rolling again, but the caution set up a restart battle between GMS teammates Moffitt and Zane Smith.

Smith jumped to the lead, staying out front for seven laps before Moffitt reappeared alongside his No. 21 Chevrolet. Moffitt managed to lead one lap, but fell back, and Smith took the green-and-white checkered flag first to end Stage 1 – all while heavy clouds continued to build in the distance.

With Parker Kligerman out front for the first time due to a differing strategy, Bryant Barnhill suffered a flat tire and spun just three laps into stage 2. Once restarted, the field didn’t get half a lap in before Korbin Forrister and Jennifer Jo Cobb crashed heavily in the first corner.

Rhodes grabbed the lead for a few laps before Creed was able to get around him, leading what proved to be the final 20 laps of the race. Creed held on to win stage 2 and lead the field under caution as threatening skies continued to loom.

A nearby lightning strike forced NASCAR to bring the field down pit road with Creed in front, and the skies soon opened up and washed out the remainder of the race. Creed scored his first career Truck Series victory by virtue of the rainout, also scoring his fifth top-10 finish of the season.

BUCKLE UP IN YOUR TRUCK 225 RESULTS

The Truck Series will be back next weekend under the lights at Texas Motor Speedway. The Vankor 350 will get started shortly after 8 p.m. ET on Saturday, July 18.