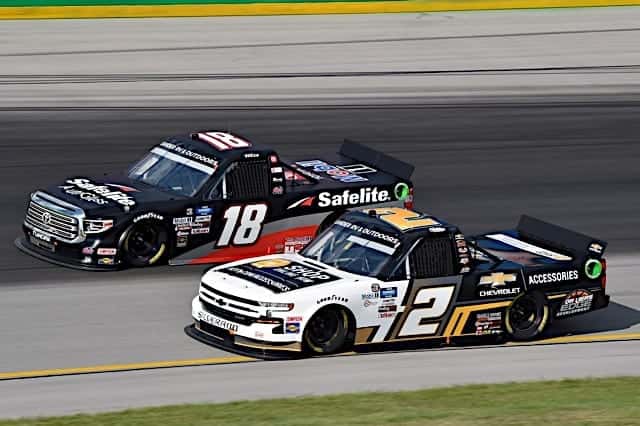 In a Nutshell: Sheldon Creed was out in front of the field when the rains came over Kentucky Speedway late Saturday (July 11) to score his first career Gander RV & Outdoors Truck Series win. The red flag flew right after stage two came to an end due to lightning, and the trucks were brought down pit road where they stayed. The torrential rains hit, and NASCAR wasted little time calling the race complete. Ben Rhodes finished second, followed by Matt Crafton. Johnny Sauter and Austin Hill rounded out the top five.

He took the leaders three-wide, and it proved to be the winning move for @sheldoncreed at @KySpeedway.

See how he got it done. ⤵️ pic.twitter.com/RIIP0FQiRN

Why Did NASCAR Call the Race So Quickly?

I can’t be the only one that was surprised NASCAR didn’t even wait half an hour before calling the Truck Series race, can I? I mean, I understand that it was an official race following the completion of stage two, but that band of rain didn’t look THAT bad, did it? Why couldn’t NASCAR wait it out a little longer? After all, if you’ve been around the sport for any length of time, you know that there have been plenty of times where we’ve waited hours to even start a race, much less call it short of its scheduled distance.

So, I did the logical thing and reached out to someone with a little more expertise than myself when it comes to weather, and while he was also surprised the call was made so quickly, he gave some solid insight into why NASCAR may have decided not to wait it out.

“At that immediate moment, a lot of people were focused on the first band of rain, which I was estimating could take 40-60 minutes to push through,” Aaron Studwell, Ph.D. (also known as @RaceWeather), who does Twitter forecasts for NASCAR races explained. “But beyond that (and this was at 8 p.m. EDT, so about 15-20 min after NASCAR called it), the rain extended 100 miles to the northwest, moving southeast at [approximately] 30 mph. So say another three hours, which says, the rain ends at 8:30-ish p.m. EDT, you start drying, and then it rains again and could go until 11 p.m. EDT.

“While the back edge of the rain *may* have been dissipating, conservative, you had another 60 miles of rain, so that’s 10 p.m. EDT. Say you can dry it 75-90 minutes. You’re now not looking at starting until past 11 EDT. I was surprised they made the call that quick. But if I were in the media center or race control, that’s exactly what I’m telling them at that moment.”

For what it’s worth, NASCAR’s reasoning was quite similar.

Reason for calling race-Lightning warnings still being received and on radar for Atleast an hour in addition to rain. Wouldn’t be able to restart even if it stopped now until 11p.

So while it still doesn’t make the fact that we got just 71 of 150 laps of Truck Series racing, the fact remains that there was, in reality, little chance for there to be a reasonable restart to the race. And for the record, when I wrapped up the conversation with Mr. Studwell around 9:40 p.m. ET, it was still raining at the track. Simply put, NASCAR’s hand was forced, and the right call was made without making teams and drivers wait around forever.

Weather-related or not, Crafton walked away from Kentucky Saturday night with a third-place finish. It comes as a welcome sight for the No. 88 team that has struggled in recent weeks, including a crash in the first turn of lap 1 at Pocono Raceway a couple of weeks ago.

For Crafton, it was just his second top five of the year and his best finish since a runner-up at Homestead-Miami Speedway to close out the 2019 season. And more importantly, it turned around a stretch of what Crafton referred to as “absolutely the worst races I can remember racing in my career.”

The momentum headed into another mile-and-a-half race next weekend is just what the No. 88 team needs right now.

“It’s huge. What’s crazy to think: the last four races have been horrendous for us,” Crafton explained during his post-race media availability. “We went to Las Vegas [Motor Speedway] and we were really, really good and had really good speed. I felt that we had a shot at being able to win that race if everything fell our way.

“Then we went to Charlotte [Motor Speedway] and were very good and had the track bar rip out of the frame. To finally get that gorilla off our back and finish third, it was good. All in all, I know we had a very fast truck and definitely could have won this race if we had the track position there at the end.”

The third-place finish allowed Crafton to jump to 12th in the standings, and he’s closed his deficit to 10th-place Tyler Ankrum to just 22 points. If Crafton can keep up his momentum through next weekend at Texas Motor Speedway, he’ll put himself within arm’s reach of the playoff grid once again.

Our @safelite Tundra was so damn good today. P6, just really hard to pass. Wish we could have finished but one we can build on. Bring on Texas! @KBMteam

Damn rain, That’s a tough one to swallow. Made a mistake on taking 2 tires which made us way to tight at the end of stage 2. Luckily going home with a stage win and good points congrats to my buddy @sheldoncreed ? p7

The Toyota Tundra was really fast, the team chemistry was on point, we were more and more efficient after every lap and we were playing it safe for the end of race. The weather⚡️took over the events, the race ended with a red flag on lap71. P13 for Team No.4 @SIRIUSXM |@canac_ca pic.twitter.com/WwvN4jouCU

Points Update: Austin Hill maintains the point lead by 46 over Sheldon Creed. Ben Rhodes and Christian Eckes sit third and fourth, respectively. Grant Enfinger and Zane Smith are tied for fifth, just a single marker ahead of Todd Gilliland in seventh. Johnny Sauter, Brett Moffitt and Tyler Ankrum round out the top 10.

Up Next: The Truck Series heads to Texas Motor Speedway for the first of two postponed races at the mile-and-a-half oval on Saturday, July 18. Coverage for the Vankor 250 begins at 8 p.m. ET on FOX Sports 1; the race can also be heard on your local MRN affiliate and SiriusXM NASCAR Channel 90.