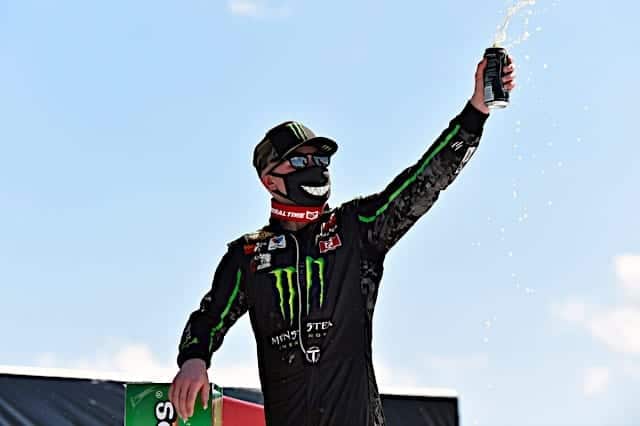 “Never give up, keep going,” is the life motto for 17-year-old Ty Gibbs. After saving his No. 18 Joe Gibbs Racing Toyota when he and Michael Self made contact, Gibbs drove back to the lead and won the 2020 General Tire 150 at Kentucky Speedway. It is his fourth career ARCA Menards Series victory.

“There was a time right there where I could’ve given up but I didn’t,” Gibbs said after winning the race. “I kept pushing forward, so did my team, and we came home as winners. It was a fun time. I came here as a kid and now I’ve come here and won just like Pocono. It’s just amazing. This means the world to me.”

Gibbs led the field when both of the competition cautions occurred. The only other caution during that period occurred on lap 18 when Scott Melton pancaked the right side of his car against the wall, ending his day.

On the ensuing restart after the second competition caution, Gibbs and Self drove down into the corner and made contact, but both nicely saved their cars and ARCA officials withheld throwing the yellow flag.

Close quarters racing on the restart! ?

“I’m not really mad at him, it’s hard,” Gibbs said on the dicey moment racing Self. “This track is so line-sensitive. When we went into there, we were both racing our guts out. He drove it in hard and he kinda clipped me in the right rear. Fair game; luckily I didn’t get in the fence so stuff like that happens. It’s racing.”

Bret Holmes took the lead with Hailie Deegan and Mayer closely following him. Gibbs and Self regained their composure, gathered up their cars and continued racing hard for the rest of the race. Both drivers took a small breather when the yellow flag flew on lap 69 after Thad Moffitt made significant contact with the wall. He ended with a DNF in 15th place.

On the following restart, Mayer incurred a penalty for jumping into action too soon since he was not the control car. Meanwhile, as the field raced on the backstretch, Deegan came up in front of Drew Dollar. There wasn’t enough room for both drivers. Dollar turned Deegan into the wall.

For Deegan, the damage to her No. 4 DGR-Crosley Ford was terminal, leaving her with a 14th place finish.

“Everyone’s close racing. Some people don’t know how to race on bigger tracks sometimes,” Deegan told Fox Sports 1 after being released from the infield care center. “There’s a lot of inexperienced drivers out there and we’re all learning. I wasn’t moving up, I was right there and then just got hooked. It happens I guess, it’s racing. What goes around comes around.”

“I didn’t have any room,” Dollar said after the race, regarding the incident with Deegan. “It’s hard coming out of (turn) 2, there’s no room. Everyone’s trying to be on that PJ1. It’s far from the spotters, I know they don’t have a good view. That’s coming from the spotter. Got to tell her, ‘Outside,’ and maybe he did. That’s just hard racing there at the end.”

As Gibbs battled Holmes for the lead, Gibbs made the race-winning move with an aggressive drive.

“Second sucks,” Holmes said in a post-race interview. “We’re the underdog here; we don’t have any manufacturer support, we don’t have any sponsors. We’re a single-car team; we’re not a Cup (affiliated) team so it’s tough for us. We’ve slowly been building this entire team. It’s taken us a few years but I’m d**n proud of my team. We’re knocking on the door, we’re right there. Little bit of beating and banging for the lead but I don’t mind that as long as I take it back the next time.”

When the checkered flag flew, Holmes finished a career-best second. Self crossed the line in third place, and Mayer and Dollar finished fourth and fifth, respectively.