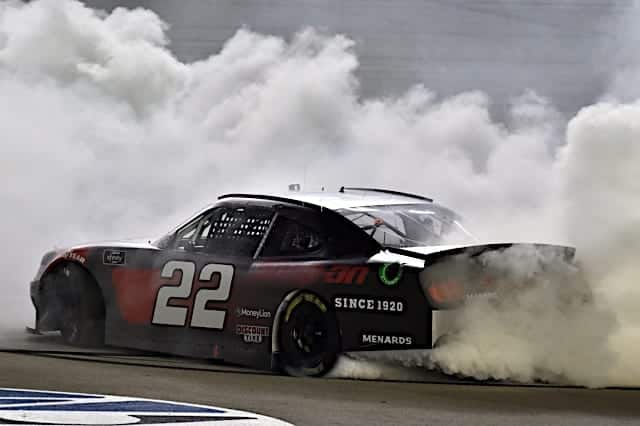 He was a 2016 winner at Kentucky Speedway in the ARCA Racing Series. He scored his first two career wins on the road courses in 2019. And now he doesn’t have to worry about going winless on oval tracks this season. Austin Cindric managed to win not one, but both races in the Xfinity Series doubleheader weekend, collecting his third and fourth career wins.

Both races may have had a few late-race twists, but Cindric’s No. 22 Ford Mustang was just too hard for the rest of the field to catch. He led 171 laps total between both races, and after the two statement victories, is vaulted all the way up to third in the drivers standings.

Race 1: While Cindric lit up his tires on the frontstretch, Herbst still came out of his No. 18 Toyota Supra with smiles. Herbst hardly left the top 10 all night long. And when it came time to go to work in Overtime, Herbst charged up from fifth to second, crossing the line in that position. The runner-up finish is his second of the season, also having done so at Auto Club Speedway in March. A good use of skill and capitalization on opportunity by the young driver from Las Vegas.

Race 2: At the end of the first 9 laps, Justin Allgaier was in a deep hole. A brake rotor off of Kyle Weatherman’s car impacted Allgaier’s windshield on the first lap, and eight laps later, he pulled into pit road after suffering a flat tire. Allgaier fell a lap down, eventually getting the free pass well into the night. He would quietly climb up the running order, taking advantage of a few skirmishes by some drivers, and somehow, someway, grabbed a fifth-place finish after everything that was thrown at him. No matter how he and his JR Motorsports team view their night, they made a statement in showing that they can battle back from diversity of any sort. It’ll be a matter of if they can find a sliver of good luck and they can convert one of these situations into a win.

Race 1: Jeb Burton fought through the pain of having no power steering at Indianapolis. Thursday night at Kentucky Speedway, things quickly went sour for Burton once again. Burton would lose control of his No. 8 Chevrolet Camaro going through turns 1 and 2 on the very first lap of the race, collecting an unfortunate Brandon Jones in the No. 19 Toyota Supra. Burton finished 34th, while Jones finished dead last in 36th. This is the second time in the past three races that Jones has wrecked on the first lap of a NXS race, as well as Burton’s second straight race finishing lower than 30th.

Race 2: After notching the first ever top-10 finish of both his career and Mike Harmon Racing’s endeavors, Kyle Weatherman would be the first retiree out of Friday night’s race. On the very first lap, Weatherman, who started eighth, washed his No. 47 Chevrolet Camaro up too high coming out of turn 2, making contact with the outside wall and suffering terminal damage, finishing dead last in the 36-car field. Not the kind of outcome that the No. 47 team was hoping to have, considering the high point they achieved last night.

Race 1: After Canadian Alex Labbe brought home an eighth-place finish for DGM Racing at Indianapolis, it was Ronnie Bassett Jr.’s turn to wheel the team’s No. 90 Chevrolet Camaro at Kentucky on Thursday. Bassett took the white flag while running comfortably in the top 15, until the No. 7 Chevrolet Camaro of Justin Allgaier broke loose under Bassett coming off turn 2, clipping him in the left rear. Bassett would take a hard hit to the inside SAFER barrier, briefly going airborne before being hit in the front end by the No. 61 Toyota Supra of Timmy Hill. Bassett was OK, but his racecar can’t say the same.

Race 2: It happened at Charlotte Motor Speedway. Friday at Kentucky Speedway, Noah Gragson and Harrison Burton ended up in the same situation again. With a handful of laps to go, Gragson charged his No. 9 Chevrolet Camaro hard underneath Burton’s No. 20 Toyota Supra going into turn 3. The move did not work out, causing both Gragson and Burton to slide up into the outside wall. The race continued on, with Gragson finishing seventh and Burton finishing 12th. But when the two drivers conversed next to their cars in the garage, something set the other one off, and the fight was on. Fortunately it was quickly over, with no officials getting involved. Burton was vocally frustrated about the ordeal, while Gragson seemed to hold back concrete explanations of how it went down. They may not have a full-fledged rivalry, but we should keep an eye out for the possibility of it becoming real should these two tangle on the track again.

Race 1: Lost in the midst of Cindric’s victory and Bassett’s hard hit on the last lap was the career-best finish earned by Missouri’s Kyle Weatherman. With drivers sliding all over the track on the final restart, Weatherman seized the opportunity to make valuable passes and bring home his No. 47 Chevrolet Camaro in eighth. Not only is this a career best finish for the 22-year-old, but it is the first ever top-10 finish for Mike Harmon Racing in any NASCAR race.

Race 2: The 2020 season hasn’t been the kindest to Jeremy Clements. The 2017 Road America winner lined up fourth on the grid but sailed ahead past Myatt Snider to lead the lap one. Clements lead a total of 11 laps, and placed in the top-10 in both stages. After some jostling around on the final restart, Clements barely missed out on a top-10 finish, ending his night in 11th. But collecting those stage points and having his No. 51 Chevrolet Camaro come home in clean shape must feel good for Clements and his family-owned team.

“I don’t care what shape the track is. If it’s dirt, oval, I don’t care. I’m just happy this Snap-On Ford Mustang is in victory lane!” – Austin Cindric, race 1

“Just frustrated. I don’t know if he (Gragson) forgets what racetrack we’re at or what. But both times now he’s put us in the fence, Charlotte and now here.” – Harrison Burton  , race 2

Kentucky Speedway has historically been a place where younger drivers have success far more often than at other places. First time NXS winners at the track include David Gilliland, Stephen Leicht, Joey Logano, Austin Dillon, Ryan Blaney and Tyler Reddick. The main base of top-10 finishers in both races only had two drivers above 30 years old. Even though Cindric has two prior victories, his performances at Kentucky illustrate just how well Cindric has improved on mile-and-a-half speedways from last year to present. Now that Cindric officially has these tracks dialed in, these two consecutive wins makes him even more ready to go for the next one.

Up Next: To the rest of the competition’s fear, and to Austin Cindric’s delight, the Xfinity Series marches down south to Texas Motor Speedway, another mile-and-a-half facility. The My Fibriatic Solutions 300 is scheduled for Saturday, July 18 at 3 p.m. ET televised on NBC Sports Network.