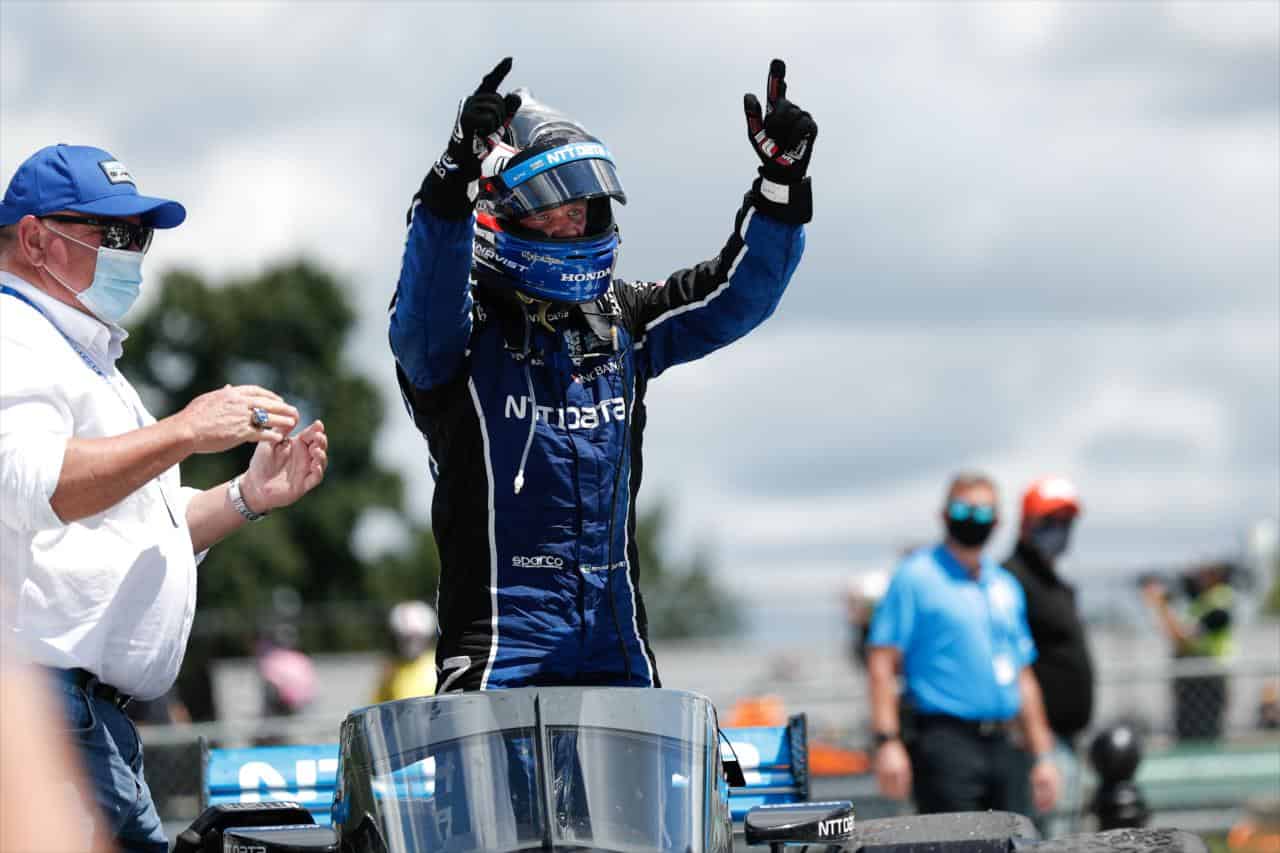 “We’ve been close so many times,” Rosenqvist said after the race. “We went all for it and had super pace. We kept closing in half a second every lap. I just stayed cool and used all my push to pass in one lap and got him. Good show and good fun.”

The grid lined up behind an astoundingly young top three. Patricio O’Ward, Colton Herta and Alex Palou—none older than age 21—secured the fastest three positions in qualifying. A late start saw O’Ward and Herta battling for the lead and a packed-up crash that took out Ryan Hunter-Reay and Graham Rahal. Jack Harvey and Conor Daly suffered damage, with the latter’s front wing sticking underneath his car as he drove back to the pits.

Replays showed that Will Power tapped Hunter-Reay from behind and then later pushed Rahal off track. Santino Ferrucci appeared to hit Harvey. Power was penalized and had to start at the rear of the field on the restart. He went from fifth to 22nd.

Calamity on Lap 1 of the @IndyCar #REVGroupGP at @RoadAmerica. on @NBC!

Will Power gets into Ryan Hunter-Reay, then gets into Graham Rahal!
Stream: https://t.co/rd1d5rkzSZ pic.twitter.com/Kbhkj6Oo7Y

The restart came on lap 4, when O’Ward’s Arrow McLaren SP entry pressed into the lead and began to extend a gap between himself and Herta.

While being interviewed outside of the care center, Rahal said, “I’m good. It’s disappointing to see desperation moves like that so early in the race.”

During Rahal’s interview, Power spun on his own and stalled the car.

“He’s getting what he deserves today,” Rahal said of Power while observing the incident.

Hunter-Reay agreed as he watched the replay of his own accident.

The caution came soon after without a single complete green flag lap being completed. Ferrucci took an avoidable contact penalty and would start from the rear of the grid at the restart. Power came to the pits and took repairs, then rejoined the grid in the rear. Oliver Askew also came into the pits and stalled. He suffered damage from contact with Daly but was able to rejoin the field. His air jack was damaged, leaving the team to manually lift his car on subsequent stops.

The first round of pit stops came on lap 13 with Scott Dixon coming in from fourth position and Herta from third. Dixon had a slower stop and almost collided with Simon Pagenaud as he pulled out of his pit box but was able to return safely to the track, albeit far down the lineup. O’Ward pitted three laps later and was able to maintain a four-second lead over Palou. Where the name of the strategy game in Saturday’s race was the undercut, Sunday highlighted the overcut. O’Ward’s lead grew more and more dominant.

Dixon again signaled a second round of pit stops on lap 25. He complained about struggling with his rear tires, which were wearing out at a much more rapid pace than the previous day. Rosenqvist, Alexander Rossi and Marcus Ericsson all made significant gains in the middle point of the race, settling comfortably and competitively in the top five before pitting.

It's a battle of the #RoadToIndy graduates, both looking for their first @IndyCar victory, as Rosenqvist gains on O'Ward with 9 to go. pic.twitter.com/N2zQRnfoWm

Rosenqvist, though, had a disastrous stop on lap 30. The crew dropped the car before the left front wheel nut was secure. While he was able to retake his second place, he had dropped back almost four seconds from leader O’Ward. Palou, who had run well early in the race, suffered from a lack of overall grip and fell down the field.

Ferrucci and Power were the first drivers to pit for the final time with 16 laps to go. Dixon stalled the car twice on pit lane, losing even more time and placing the REV Group Grand Prix race 1 winner firmly out of contention. Frontrunners O’Ward, Rossi and Rosenqvist each had clean stops. O’Ward once again regained the lead, but he and Rosenqvist had opted for two different tire strategies. O’Ward opted for softer used red tires – an initially quicker tire but one that also wears out faster – while Rosenqvist chose the harder black compound – slower on the first few laps after the pit stop than the red, but it promised to serve the Swedish driver well closer to the end of the race. With less than 10 laps to go, O’Ward radioed into his team and noted that he would have to start nursing his tires.

Lapped traffic became an issue for the leaders. O’Ward quickly passed Daly, but the American driver hung just behind the leader hoping to overtake for the lead. Dalton Kellett, too, presented a problem as he was lapping about one second slower than the leaders. O’Ward let Daly by with four laps to go as Rosenqvist quickly shrunk the gap to the lead. The pressure appeared to get to O’Ward, with the Mexican driver beginning to run wide in turbulent air. And having pitted a lap before Rosenqvist, he also had fuel savings to contend with.

With two laps to go, Rosenqvist pushed his way in the lead. O’Ward fought hard, attempting to retake the lead but ultimately wasn’t able to make it happen. Rosenqvist drove away quickly. He took the checkered flag first, leading O’Ward to the finish. Rossi, Ericsson and Herta rounded out the top five.

O’Ward was proud of his finish but disappointed that it didn’t end up in a win.

“I think we did a really good job managing the whole race, but toward the end when we mixed with lapped cars and dirty air, it hurt us,” O’Ward said. “I gave it every single bit I had, I kept pushing. … We just missed that little extra on keeping our rear tires under us.”

“It’s not a win, but it’s a step in the right direction,” Rossi said about finishing third after what’s been a devastating season for the former Indy 500 champion. “It’s the motivation we needed. Hopefully we’ll keep that trend going.”

Herta now sits second in the overall championship standings due to the fact that he’s the only driver to have finished in the top 10 in every race this season—but he’s ready for more.

“It’s great to have a top five, don’t get me wrong, but I wanted to bring home some hardware,” Herta said. “Another solid day, another day where I feel like we didn’t have the most pace but ultimately we got there in the end.”

2 great races this weekend from the Indycar series! Things fell into Dixon’s lap yesterday, but what an Epic run by Rosenqvist! His car was absolutely on rails the last half of the race. O’Ward will get his, just not today.

I think it was Townsend Bell who made a remark about Will Power hitting everything but the helicopter in that first lap – had me LMAO! But I’m concerned for Will – he must be feeling a ton of pressure, as his driving of late seems to be full of desperation. I wonder if he has been told (or feels) he will be out of a ride next year if performance doesn’t improve?